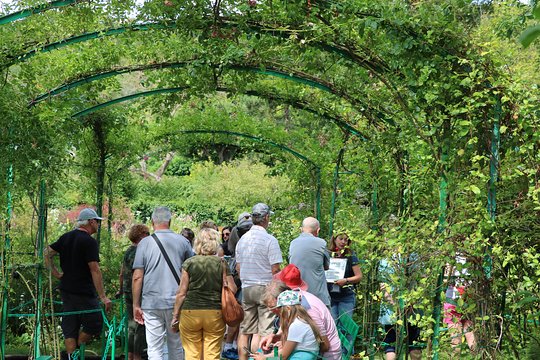 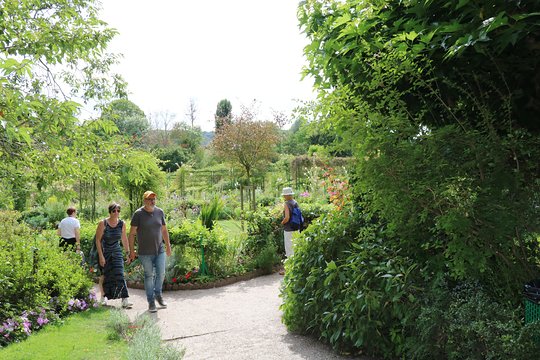 Select Date and Travellers
From
US$292.81
(Price varies by group size)
Date
2 travellers
Free Cancellation up to 24 hours in advance
Reserve Now & Pay Later
Low Price Guarantee
Overview
Highlights
What to Expect
This half-day trip will lead you to the edge of Normandy, where you will visit the idyllic home of Claude Mone located in the small village of Giverny. Your afternoon tour, will start from Paris City Center where your guide will pick you up at your hotel or private apartment. You will be transported aboard a deluxe minibus with one of our guides, so you can, relax and make the most of your trip.

Once at destination in Giverny, you will enjoy time in the gardens which have been replanted as they once were and offer visitors the “painting from nature” which Claude Monet’s contemporaries considered to be one of his masterpieces. The rectangular Clos Normand, with archways of climbing plants entwined around brilliantly coloured shrubs, lies before the house and studios, offering from Spring to Autumn the palette of varying colours to the painter-gardner who was “ecstatic about flowers”. Lastly, the Water Garden, formed by a tributary of the Epte, lies further away, shaded by weeping willows. With its famous Japanese Bridge, its wistarias, azaleas and its pond, it has once more become that casket of sky and water which inspired the pictorial universe of the water lilies.

You will also have the opportunity to discover a precious collection of Japanese engravings displayed in several rooms, hung in the marmer chosen by the master of Giverny himself. Claude Monet’s property at Giverny, left by his son to the Académie des Beaux-arts in 1966, has, after completion of large scale restoration work, become the Claude Monet Foundation, inaugurated in 1980. The huge Nymphéas studio, a stone’s throw from the house, has also been restored and contains the Foundation’s Shop.

Then before leaving the village of Giverny, pay a last tribute to this universally acclaimed artist, at his grave.
Show More
Important Information
Departure Point
Paris, Paris, Ile-de-France

Traveler pickup is offered
On specific arrondissements, Complimentary pick-up is offered for this tour/activity:

No pick up or drop off can be accommodated for the for postal / zip code from 75019, 75020
Departure Time
1:10 PM
Duration
5h
Return Details
Returns to original departure point
Inclusions
Exclusions
Show More
Additional Info
Cancellation Policy
For a full refund, cancel at least 24 hours in advance of the start date of the experience.

Ellen Lemaster
10
Versailles Guided Tour
Our guide was extremely knowledgeable about Versailles. He knew details and stories we would have never heard…
Read more

Sachelle H
Paris, France
187
Siene cruise and Moulin rouge
Where do I start! Moulin Rouge was exactly as I expected! Loved the entertainment and thrills during the night.…
Read more

bill peeler
50
highly enjoyable
What a lovely manicured garden. An extra treat was the paintings on the second floor. Nice to see the "Thinker"…
Read more

BeeAyeMan
80
All the Rodin you could want
Very nice Rodin museum with some most of the famous Rodin pieces on display. Fabulous collection of paintings the…
Read more

Marlene E.
70
Wonderfulk day touring the sites outside of Paris
Pamela was a wonderful tour guide. Very knowledgeable and personable. Knew her history and was lots of fun. The…
Read more

proxl
664
Fantastic!
We loved this tour - Versailles was as advertised: Grand, historic and beautiful. Giverny was beyond our…
Read more