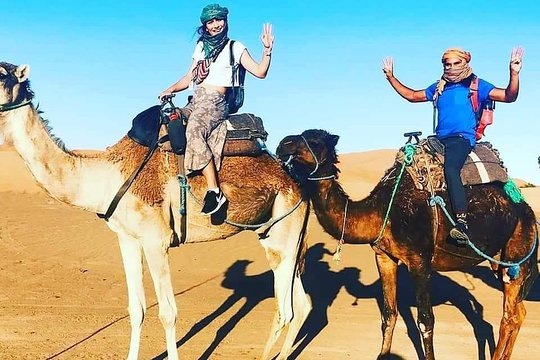 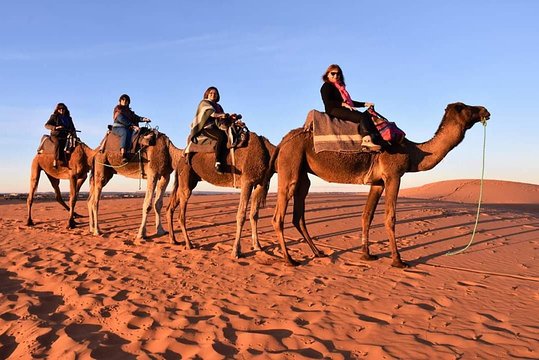 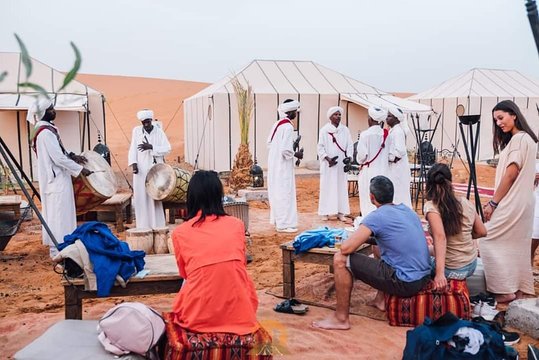 Select Date and Travellers
From
US$459.39
Date
2 travellers
Free Cancellation up to 24 hours in advance
Low Price GuaranteeNo Booking Fees
Overview
What to Expect
Itinerary

Pass By: Ifrane, Ifrane, Meknes-Tafilalet Region
Ifrane city it known as (Switzerland) of Morocco it built by the French in the 1930s . Nearby the (ski-resort) of Michliffen offer many snow, and sport Activities

Pass By: Azrou, Azrou, Meknes-Tafilalet Region
Azrou city it berber village built at altitude of 1250 meters Nd home of the berber tribes still lived by the amazigh. Original inhabitants before the arrival of the arabs. We continue by the (ceder forest ,monkeys and cork) .

Pass By: Errachidia, Morocco
Errachidya city we see the nice vue of oasis of palms.


Pass By: Merzouga, Merzouga, Meknes-Tafilalet Region
merzouga the erg-chebie, sand dunes .
The dunes are height up to 50 meters . Then you ticking the camel red for 2 hours walking inside the desert to see dunes ,stars, moon and the best group musician of the traditional berber music in the luxury camp with shower, wifi, dinner and chow.

Pass By: Tinerhir, Tinerhir, Souss-Massa-Draa Region
Tinghir city the (Toudra Gorge) are a series of rugged wadi gorges carved by the Toudra river in Morocco. The river originated in the high atlas range of the atlas mountains flowing some 350 kilometers 220mi south west before joining the draa river at the edge of the Sahara. The many colored walls of gorges range anywhere from 200 to 500 meters (650 to 1600 feet).


Pass By: Ouarzazate, Ouarzazate, Souss-Massa-Draa Region
Ouarzazate is a city south of the Moroccan high atlas mountains, knows as the gateway to the Sahara desert. It's huge kasbah of taourirt, home to a 19th palace ,offers a view of the surrounding rocky landscape which appears in several films. To the north -west is the fortified city in the red earth of air ben haddou will the rocky throats of toudra extend to the northeast. A road winds towards the southeast, through the lush palm groves of the draa valley .

Pass By: Ait Ben Haddou, Ait Ben Haddou, Souss-Massa-Draa Region
Ait Ben Haddou will the rocky throats of toudra extend to the northeast. A road winds towards the southeast, through the lush palm groves of the draa valley .

Write a review
Traveller rating
Traveller type
Time of year
Language
Selected filters
Aderbal L wrote a review Oct. 2019
Sao Paulo, SP3 contributions
Vacation
It was an amazing trip! The guys are awesome, very kind and trustful. Everything gone perfect, fare prices, good service and friendly company. We felt like home! We recommend, one of the best times of our lives.
Read more
Date of experience: November 2019
Helpful
Share
About the operator

Yiqi S
san diego
71
hiring a local guide will make fez trip much enjoyable.
Our guide Adil is local, grown up and still lives in the maze like Médina. He took us to all the interesting shops…
Read more

nrvana
Chicago, Illinois
72
BEWARE Scammed at one of the shops on the tour
Adil talked up the market shops he will take you to saying that the markets sell fakes and the shops he’ll show…
Read more

Jennifer L
New York City, New York
10
Adil is the best. Full stop.
My husband and I did the half-day tour of Fez with Adil today, and it will probably be one of the highlights of…
Read more

Aar5130
10
Great tour
The Médina is impossible to explore without getting lost without someone who knows what he streets, it was just me…
Read more

Tammie805
20
Decent tour
The guide arrived about 35 minutes late which threw off our schedule for the evening. However, he did a great job…
Read more 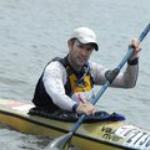 RoryMorgan11
34
A great trip
This is my 3rd trip to Fez , using a guide each time due to the Labrinth of alley ways and simply it is a…
Read more

salazr
Sydney, Australia
31
2 days in Fez
Adil was an awesome guide!! Being a local he was able to show us the real Fez. We visited the royal palace /…
Read more 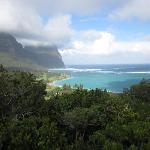 DonnaM61
Melbourne, Australia
99
Perfect walking tour of Fes Medina
Adil took my friends and I (We were a group of 4) on what was going to be a half day medina tour but ended up…
Read more

eddiewoowanderlust
10
Review of Guided Tour of Fes Medina with Abdil
To get the most out of your time in Fes, I highly recommend you hire Abdil as your guide. Don’t even think about…
Read more

Thechanel
10
I love love love Adil!!!! Best man, and guide in the world.
Where do I begin? Adil was so fluent in English. There was no trouble and we were welcome with warmth and…
Read more

545briena
Los Angeles, California
70
Excellent half day tour
Adil is a terrific guide and knows the Medina and Fes like the back of his hand. We had a great tour and learned a…
Read more

pjajs
20
Mom&Daughter Fez-->Sahara
Our driver trustworthy Aziz kept us safe from Marrakesh to Sahara. Adil was our tour guide he was knowledgeable.…
Read more

Samggaunt
10
An amazing trip!
Would highly recommend the trip was a beautiful experience and we will remember it for the rest of our lives!
Read more