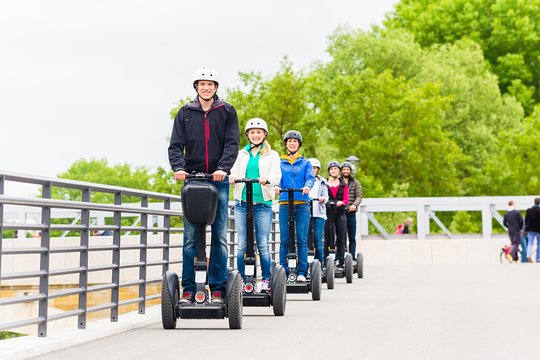 This product is unavailable to book via Tripadvisor. Contact the supplier for availability.
From
US$96.16
Free Cancellation up to 24 hours in advance
Low Price GuaranteeNo Booking Fees
Overview
Are you looking for new way of traveling Seoul instead of getting on Coach or Walking? Here's A NEW WAY OF TRAVELING SEOUL in easy transportation. That's by SEGWAY! You don't need special skill, even you don't have to know riding two wheel bicycle. It's just Easy to learn. In 5 to 15min, you will master how to move around on Segway!

By riding on this cool transportation, you will go around the major tourists spots that you must visit in Seoul! Changdeokgung, Ikseondong hanok street, Cheonggyeoncheon, Gwangjang food market,etc! You will also try Korean street food at Gwangjang market and for dinner, you will have Korean BBQ at the famous local BBQ restaurant! Professional tour guide will give you narration about Korean culture, history, customs, etc during the tour

Why you should book?
- We do small group tour, maximum 10pax
- Professional, friendly and experienced tour guide will be with you
- Tour guide will introduce authentic local food
- You will have Quality Korean BBQ there
What to Expect
Itinerary
This is a typical itinerary for this product

It's the center of Seoul, where you can see the view of the main palace, Bukak Mountain, Blue house, two statues of Korean heroes,etc! Plus it's the perfect place to practice and Enjoy SEGWAY riding!

Changdeokgung was the most favored palace of many Joseon princes and retained many elements dating from the Three Kingdoms of Korea period that were not incorporated in the more contemporary Gyeongbokgung. One such element is the fact that the buildings of Changdeokgung blend with the natural topography of the site instead of imposing themselves upon it. It, like the other Five Grand Palaces in Seoul

Ikseondong hanbok street shows special ambiance of Korea, where you can find pretty alley, which is different from Bukchon hanok village, during tour, you will pass through this pretty alley!

This market is the oldest traditional market where you can find so many Korean traditional food, here you will do food tatsting : representative foods of the market!

Cheonggyecheon is an 11 km long modern stream that runs through downtown Seoul. Created as part of an urban renewal project, Cheonggyecheon is a restoration of the stream that was once there before during the Joseon Dynasty (1392-1910). The stream was covered with an elevated highway after the Korean War (1950-1953), as part of the country's post-war economic development. Then in 2003, the elevated highway was removed to restore the stream to its present form today. The stream starts from Cheonggye Plaza, a popular cultural arts venue, and passes under a total of 22 bridges before flowing into the Hangang (River), with many attractions along its length.

It's the place where business man go after work for dinner and step-dinner, drinking, eatding and singing at Noreabang(karaoke)

Write a review
Traveller rating
Traveller type
Time of year
Language
Selected filters
Popular mentions
G M wrote a review Nov. 2019
United States5 contributions
+1
Wonhee Wonhee Wonhee
Wonhee was amazing!!! I can't speak enough for our tour guide Wonhee! I've been on many tours before including segway tours and Wonhee by far has been the best guide ever!! We started by taking a quick tour in front of the US Embassy then dove right into the city including a…
Read more
Helpful
Share
Nicolas G wrote a review Nov. 2019
1 contribution1 helpful vote
Segway tour of Seoul
Our guide, Wonhee, was a fantastic tour guide!! Very friendly and highly intelligent, he has an encyclopedic knowledge of Seoul. Wonhee is very engaging, personable, and seems to love his job. I highly recommend his Segway tour. Seoul is a beautiful city, and Wonhee made our…
Read more
Date of experience: November 2019
1 Helpful vote
Helpful
Share
Zach wrote a review Oct. 2019
1 contribution
Korea all day Segway Tour
Amazing tour done by @Sreiousman. He is both knowledgeable and passionate about Korean history and culture, he showed us around the city piece by piece, never rushed. We took our time at every stop to either enjoy the scenery or tell us about the history/culture behind it. …
Read more
1 Helpful vote
Helpful
Share
Florentina B wrote a review Aug. 2019
1 contribution
So much fun while touring the city!
My guide was very very nice and his english was very high skilled. I was alone that day but we had so much fun and had good conversations! He took very skilled photos for me which was so nice. The segway was a lot of fun and he thought me well how to drive it. 10/10 would…
Read more
Date of experience: August 2019
1 Helpful vote
Helpful
Share
Write a review
What was your experience like?
Write a review
Share your best travel photo
Let the world see your experience through your eyes.
Post a photo
Get quick answers
Ask fellow travellers and attraction managers your top questions.
Ask a question
About the operator

Robert B
Centre Wellington, Canada
40
Great way to tour Seoul
After 5 minutes of instruction we headed out into the city for our tour. Jun was a great guide and, although…
Read more

Robert B
30
Fun tour in Seoul
Wonhee was a great guide. Neither my wife or I had ever tried the Segways before, but they were easy to learn…
Read more

Keith C
21
Highlight of our week in Seoul!
Wow. What an amazing ride! Won-Hee is a super great host, taking us to some of Seoul’s most amazing and hidden…
Read more

G M
United States
10
Wonhee Wonhee Wonhee
Wonhee was amazing!!! I can't speak enough for our tour guide Wonhee! I've been on many tours before including…
Read more

V_R
10
Great guide, company, and ride with fantastic views!
We were expecting a handful of people on our tour but it ultimately ended up just being a total of the three of…
Read more

Nicolas G
11
Segway tour of Seoul
Our guide, Wonhee, was a fantastic tour guide!! Very friendly and highly intelligent, he has an encyclopedic…
Read more

noga132
11
Incredible guide for an incredible city! Super fun segway tour around Seoul
We had our tour with Wonhee, who was super sweet and helpful! His English was fantastic and he made everything…
Read more

Darren KB
11
Fun Riding Tour of Soul
The biking was very fun, me and my mom and her friend really enjoyed it.We got to see a lot of sites in Seoul that…
Read more

Justin J
11
Awesome tour
WonHee was an amazing tour guide. He was prompt at the meeting site. He was very helpful with helping us adjust…
Read more