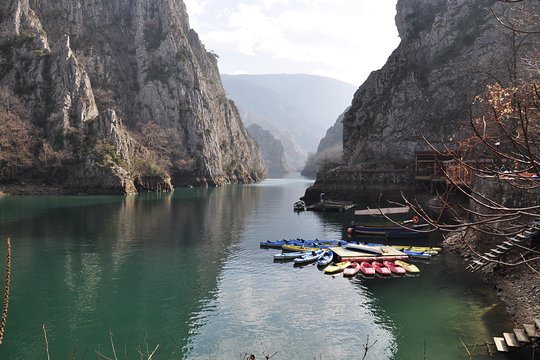 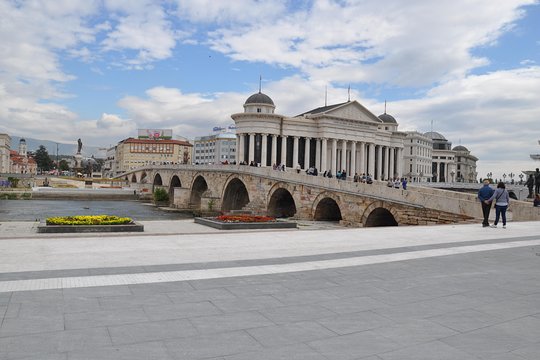 Meet at the airport and drive to Skopje the capital of Macedonia. It is a very attractive tourist destination with its fortress, cultural and historical monuments, archaeological cities, caves in the canyon of the river Treska and Lake Matka and a health spa in the eastern part of the city. The downtown, hides interesting sites that need careful attention: the old station, (a reminder of the earthquake of 1963) the archaeological museum, the memorial house of Saint Teresa of Calcutta, Macedonia Square with numerous monuments like the monumental statue of Alexander The Great, the Stone Bridge, the Museum of Holocaust, the old bazaar, the church of St. Spas with the beautiful wood-carved iconostasis (19th century), the Daut Pasha Hammam, now an art gallery, one of the largest and finest examples of Ottoman architecture in the Balkans, KapanHan, (15th century), the Mustafa Pasha Mosque(15thcentury),etc.

Matka Canyon The Canyon Matka is situated close to the capital Skopje, in one of the oldest artificial lakes in Macedonia and spreads over 5000 hectares making it one of the most popular natural destinations for nature lovers. In the canyon, there are 10 caves. It is also referred to as the Butterfly Canyon.

Vrelo Cave Located on the right bank of the Treska River, Vrelo Cave was listed as one of the top 77 natural sites in the world in the New7Wonders of Nature project and made it to the semi-finals. Vrelo Cave has many stalactites and two lakes within it making this a very interesting site. Though the exact depth of the cave is unknown, some speculate that it could be one of the deepest underwater caves in the world. Overnight in Skopje

After breakfast drive to Ohrid through Mavrovo visiting the monastery St. John Bigorski. It is one of the most beautiful monasteries in the Balkans and comprises the unique altar masterly wood-carved in deep carves. After visiting the monastery St. John Bigorski we continue to Ohrid (the City of Light) with 365 churches in XIX Century, and with more than 50 active churches today, and certainly, a city built on the shores of one of the most phenomenal natural beauties – Lake Ohrid, where we visit: Church “St. Sofia”, “St. Clement”, a classic Orthodox Byzantine church, dominating the Old Town, demonstrates the link between Byzantine and Italian Renaissance art. At “Plaoshnik”, in the 9 the century, St. Clement of Ohrid founded the first University of Europe and educated 3.500 students, St. John at Kaneo, stands alone on a small promontory which juts out into the Lake at the western end of the Old Town, and provides spectacular panoramic views of the Lake and surrounding mountains, Samuil fortress, etc. Overnight in Skopje.

Ludmilla C
10
Skopje weekend break -best tour in Skopje
I went there with my little boy and husband, in a weekend break. I contacted Macedonia Holidays through their…
Read more
Key Details
Why Book on TripAdvisor?
Frequently bought together
Transfer Skopje to Tirana with Half...
5 Reviews
from US$185.15*
Kosovo Day Trip: Pristina and Prizren...
40 Reviews
from US$134.65*
Likely To Sell Out
Day trip in Skopje
from US$63.96*
Private Full-Day Ohrid Tour from...
3 Reviews
from US$123.43*
More options from Macedonia Holidays
See all
Ohrid Weekend Break
from US$399.47*
Ohrid Half Day Walking Tour
from US$87.53*
Best of Macedonia Tour
from US$714.79*
Cultural Tours(40)
See all
Kosovo Day Trip: Pristina and Prizren...
40 Reviews
from US$134.65*
Day tour to Skopje, North Macedonia
76 Reviews
from US$77.43*
Day tour from Sofia to Skopje, North...
4 Reviews
from US$56.11*
Food by Foot Skopje City Tour
7 Reviews
from US$35.91*
Shop Tickets And Tours(134)
Shop Now
Day Trips & Excursions
Food, Wine & Nightlife
Cultural & Theme Tours
Tours & Sightseeing
Private & Custom Tours
Walking & Biking Tours