3-Day Golden Triangle Tour Delhi to Agra and Jaipur by Car
By: My Tour Travelogy
1 review 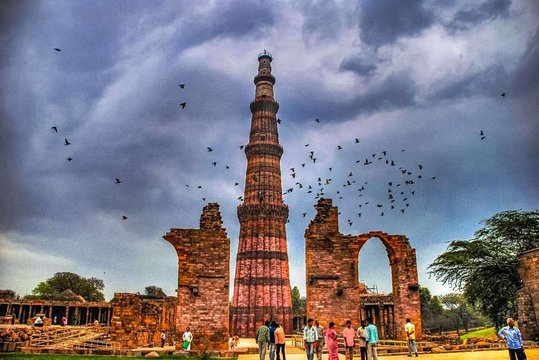 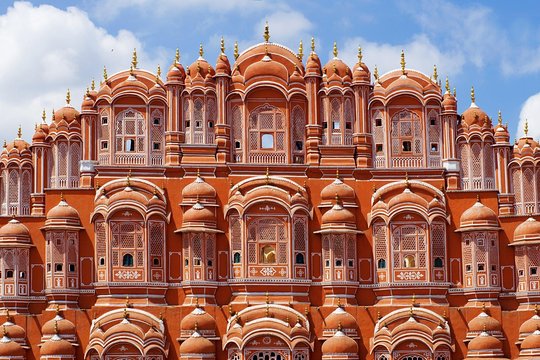 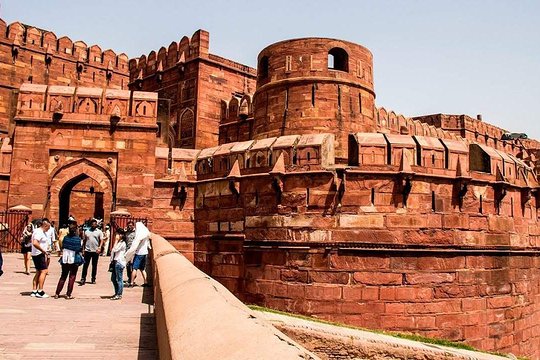 Day 1: New Delhi - Agra (You will be picked up from your Hotel, Airport or any desired location in Delhi, Noida or Gurugram)

Stop At: Mehrauli/Qutub Minar, Mehrauli/Qutub Minar, New Delhi, National Capital Territory of Delhi
Qutub Minar is a UNESCO World Heritage site which was established by Qutub-ud-din Aibak, the founder of Delhi Sultanate, in 1193. It contains spiral staircase and it's design is thought to be based on the Minaret of Jam.

Stop At: Lotus Temple Rd, Bahapur, Shambhu Dayal Bagh, Kalkaji Near Kalkaji Temple, East of Nehru Place, New Delhi 110019 India
Lotus Temple is a magnificent attraction of the city due to the unique flower-like shape. It was built in 1986. It has won many architectural awards and has also been featured in many newspapers and magazines. It has also been declared as the most visited building in the world.

Stop At: India Gate, Rajpath Near Connaught Place New Delhi, New Delhi 110001 India
India Gate is a war memorial located near the Rajpath. It is dedicated to the soldiers of British India who died in the wars. The India Gate, even though a war memorial, evokes the architectural style.

Pass By: Parliament House, Sansad Marg, New Delhi 110002 India
Parliament Housealso known as the Sansad Bhavan consists of the the two houses/assemblies of India, Lok Sabha and Rajya Sabha. The shape of the building is based on The Ashoka Chakra ( circular ) and is surrounded by lush green gardens which makes the view even more spectacular.

Pass By: Yamuna Expressway, Yamuna Expy, Greater Noida, Uttar Pradesh, India
During the tour you will have time for lunch at a local restaurant and then you’ll set off for the three-hour drive through Expressway to your 3/4/5 star Agra hotel.

Stop At: Taj Mahal, Dharmapuri, Forest Colony, Tajganj, Agra 282001 India
Wake up early and start your sightseeing of Agra city early with a mesmerizing view of the sunrise along with the Taj Mahal. Take a guided tour inside the Taj Mahal for approximately two hours. Taj Mahal is a UNESCO World Heritage site which has been declared as the New 7 wonders of the world. It was built by Shah Jahan in the memory his beloved begum Mumtaz. Yamuna river gives a breathtaking background and the green gardens adds on to the beauty of the monument. Then return to the hotel for breakfast. After that, check out from hotel, and visit the historic Agra Fort.

Stop At: Agra Fort Rakabgani, Agra 282003 India
Your guide teaches you its fascinating history. See the Fort's different apartments and enjoy its magnificent architecture. Agra Fort is a UNESCO World Heritage site which is a historical fort in the city of Agra. It was originally the main residence of the Mughal Emperors. This fort contains various other sites which makes one aware of the magnificent history of India.

Stop At: Tomb of Itimad-ud-Daulah, Yamuna River, Agra 282001 India
It's also called Baby Taj, It's a Mughal mausoleum in the city of Agra in the Indian state of Uttar Pradesh. Along with the main building, the structure consists of numerous outbuildings and gardens. The tomb, built between 1622 and 1628, represents a transition between the first phase of monumental Mughal architecture – primarily built from red sandstone with marble decorations, as in Humayun's Tomb in Delhi

Stop At: Amber Fort Palace, Jaipur 302021 India
Visit Amber Fort situated on the top of the hill. Amber Fort is located in Amer. It was built by Raja Man Singh I. It is known for its artistic elements. The Maota Lake located in front of the monument acts as a source of water for the fort.

Stop At: Amer Road, Amer Rd, Jal Mahal, Amer, Jaipur, Rajasthan, India
Jal Mahal is a palace located in the middle of the Man Sagar Lake in the city of Jaipur. The palace was renovated and enlarged by Maharaja Jai Singh II of Amber in the 18th century. The palace and scenic beauty of the lake attracts various tourists.

Stop At: City Palace of Jaipur, Tripolia Bazar Near Jantar Mantar, Jaipur 3023002 India
City Palace of Jaipur was constructed in 1721 and originally was the administrative and ceremonial seat of Maharaja of Jaipur. Many religious and cultural events of that time took place in the palace. It now consists of the Maharaja Sawai Man Singh II Museum, and continues to be the home of the Jaipur royal family.

Stop At: Hawa Mahal - Palace of Wind, Hawa Mahal Tripolia Bazaar Road Badi Choupad, J.D.A. Market, Pink City, Jaipur 302002 India
Hawa Mahal also known as The Palace of Winds is made with the red and pink sandstones which makes it distinguished from the surroundings. The architecture of the Mahal attracts numerous tourists. The palace is a five-storey pyramidal shaped monument and was built by Sawai Pratap Singh in 1799. - During the tour you will have time for lunch at a local restaurant. - After Jaipur city tour make the approximately five-hour journey back to Delhi or be dropped-off at Jaipur airport.

Meals included:
• Breakfast: If tour booked with option including hotels
No accommodation included on this day.
Show More
Important Information
Departure Point
Traveler pickup is offered
Hotels,Airport,Railway Station, Any where from Delhi or other desired location in Delhi, Noida, or Gurugram
Duration
3 days
Inclusions
Exclusions
Show More
Additional Info
Cancellation Policy
For a full refund, cancel at least 24 hours in advance of the start date of the experience.
1Review0Q&A

Write a review
Traveller rating
Traveller type
Time of year
Language
Selected filters
Vindhya wrote a review Oct. 2019
1 contribution1 helpful vote
Awesome trip to Delhi Agra and jaipur
It was amazing experience during Delhi Agra Jaipur tour. All the family members had enjoyed in this trip. Driver was so nice he had taken us to many good places including famous market in Jaipur and Agra. We enjoyed in hotels.all the hotel staff are very cooperative. Overall…
Read more
Date of experience: August 2019
Helpful
Share
Response from mytourtravelogy, Owner at 3-Day Golden Triangle Tour Delhi to Agra and Jaipur by Car
Responded Oct. 31, 2019
Dear Guest, Greetings from My Tour Travelogy, Agra Thank you for your precious and positive Feedback. It is our endeavor to deliver excellent services for all our guests and it is a pleasure to know that you had a memorable trip with us. Your reviews are always motivating and help us make better. Hope to see you again with My Tour Travelogy, Agra Thanks & Regards My Tour Travelogy, Agra !!! Call & WhatsApp (24×7) +91-98-10-973-997
Read more
About the operator

By: My Tour Travelogy
10 reviews

Tee123_m
10
Nice trip
Waoo wonderful trip...everything happend according to commitment..staff was very polite thanks to giving us nice…
Read more

AmritaC73
10
Delhi Agra tour
Amazing.. We all enjoyed a lot. Specially services provided by tour organizer... Special thanks to them for…
Read more

Krmanu121
10
5 Day Wonderful Trip to Delhi-Mathura-Agra-Jaipur-Delhi with My tour travelogy.
Wow!, It was a fascinating, comfortable and joyful 5 day trip. My family visited the prominent places at Delhi,…
Read more

Vps1981
11
Awesome trip to Delhi Agra and jaipur
It was amazing experience during Delhi Agra Jaipur tour. All the family members had enjoyed in this trip. Driver…
Read more 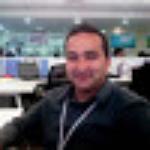 dhiraj d
20
Very good
The trip was well organized and i enjoyed it. The service was very good with nice hotel and and airport pickup car…
Read more

Kuldeep_Tomar
11
Very Professional and Fantastic service providers
I have used their service three times and they have been super fantastic all the times. Be it vehicle type/…
Read more