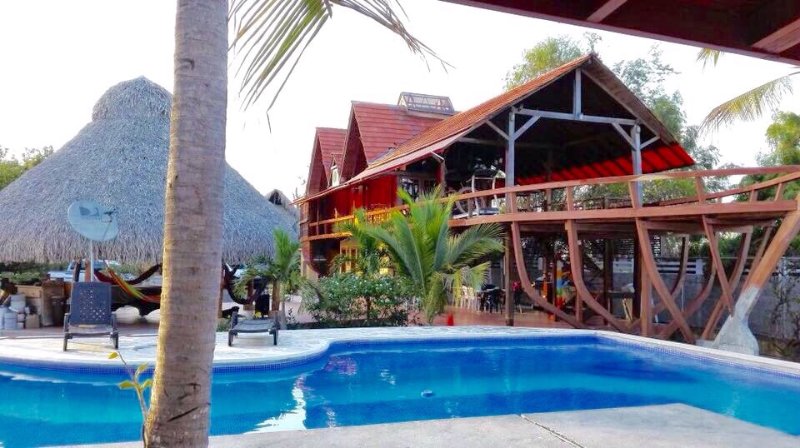 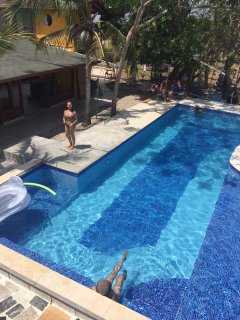 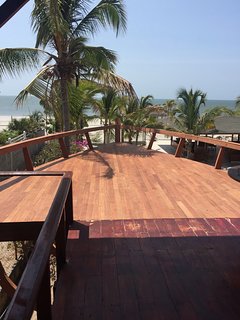 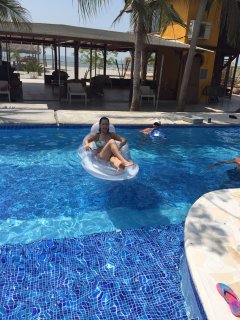 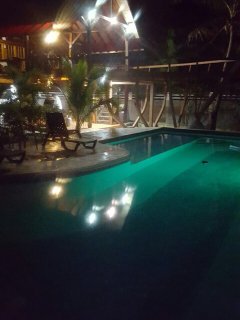 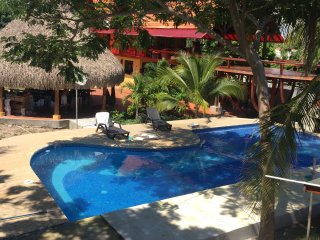 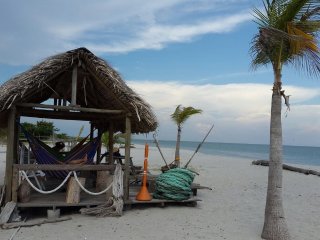 Bottom line, DO NOT GET A ROOM HERE.
I wanted to take my two boys fishing to Punta Chame and decided to get a room so I didn’t have to drive 2 hours there and 2 back in one day. I decided to make it a family trip and started to look for a decent hotel to spend the night. When my family of four first saw the hotel on line, we fell in love. The Noah’s Ark design and the over abundant amount of photos of their beautiful pool really had us going. They offered a free breakfast and also said we could arrive at 830am on day one and leave the following day at 630pm as an extended checkout. The room was $135 per night for a queen and a “full” sized beds, so we were certain this was going to be a nice room and an amazing experience. “You get what you paid for”. We sent $70 to their bank account as the requested and was told we could pay the rest ($65) on site.

We arrived on afternoon around 4pm however and rang to get let in. A very nice woman answered their gate and let us in. We were treated by a group of very awesome dogs (I’m a dog-lover.). We were shown our room and were immediately disappointed. A very small room on top of the structure. Very little space to put our bags and definitely not a $135 room by any means. Buuuut, this is about getting my boys fishing the next day and we were here and we already paid half up front. So we kept going.

The boys wanted to go to the beach and I needed to test out the fishing gear. So we went down to the beach and had a good time for a while. As it started to get dark I told the boys that they needed to move their little party to the pool. We all went to the pool and the water was fine. But, it was loaded with leaves, twigs and generally dirty. It was also packed with mosquitos. We didn’t last more than 30 minutes here and decided to move along. Getting bit up by the mosquitos was bad, but we had a long drive and needed to eat.

So, around 630pm we were getting hungry and saw they were starting to put steaks and meat on their grill and preparing food from their fully functional open kitchen in the ground floor. I asked the same lady from before about dinner and was told “no, we don’t serve meals, you have to get your food elsewhere”. That didn’t make any sense. The smell of the barbecue was amazing and the amount of meat they put on it was for a good amount of people... but apparently not us. Fine, I thought, “where do you recommend we go to?”, I asked her. She recommended that we go to “Coco Bar and Restaurant”. that they had several good dishes including fish which we were hoping for. Hungry, we headed over immediately. IT’S A FREAKING CANTINA!!! Coco Bar is a local bar, packed with drunks. That’s it. What the hell was this woman thinking of recommending that we go to a freaking bar with my 9 and 11 yr old boys? I’m not taking my family to a damn cantina!! That really upset me. How could they obviously be preparing a lot of food for someone , but then send us away to such a bad place?!?! We then drove 35 minutes to Coronado to get our meals and then 35 minutes back again. We arrived back to the hotel around 1015pm to a gate that was chained and locked!!! We started ringing the bell, knocking and yelling and after a spell was finally confronted by a drunk hotel manager (who I find out had been drinking and grilling all afternoon with several family members). He first questioned who we were and was then stunned that we had left. “We had to leave to get food and you knew that! Your wife told us where to go to!!” After an upsetting and awkward moment, they finally let us in.

After a few minutes of winding down, we went to bed. The following day, we had breakfast which was included in the menu. The breakfast was simple. No further comment. We went fishing and were back around 1pm. Once again, their fully functional kitchen was catering to everyone except us. Come to find out they were entertaining several family members and friends who were visiting. No wonder they didn’t take care of their clients, they were taking care of their friends and family. They forgot that they sent us away to get our meal and locked us out. Although they could make meals there, they wouldn’t for their paying guests but were happy to bring out the steaks, soups and full lunch for their special private guests. While there we felt forgotten, ignored, discarded and felt like we were bothering them from their drinking, bbqs, walks on the beach, etc.
Aaaaand then when we went to pay, they don’t accept credit cards.
I’ve been everywhere and have learned to never burn bridges. I’ve said to others, “never say never”. But as a business owner and world traveler, I can assure you, dear reader, these people do not care about their paying customers. The rooms are not worth the amount they’re asking for just by size alone, they do not have meals available, they don’t care where you go to eat and recommend the worst just to get you out of their hair (and away from their family barbecue). They do not maintain their facilities, dirty pool, unkept grounds and they’ll forget that your even there.

Mr Francisco Giraldo and your crew, we will never NEVER return to this hotel. Your standards are so incredibly underwhelming and you only care about yourself, not the client. So keep swilling your Ron Abuelo and forgetting about your paying clients. I’m going to ensure that every social media platform learns how uncaring and non-attentive you are to your eager customers.

Date of stay: June 2019
Was this review helpful? Yes
This review is the subjective opinion of a TripAdvisor member and not of TripAdvisor LLC
Problem with this review? Thank you. We appreciate your input.
Updating list...
Do you own a vacation rental? List it here.

Looking for a place to stay in Bejuco?
View all 5 vacation rentals