Would not recommend this place! Rooms extremely dated and service terrible. - Review of AKZENT Waldhotel Rheingau

US$175
US$142
View deal
SAVE US$33
Free cancellation until 21-04-21
Reserve now, pay at stay
eDreamsUS$142
Booking.comUS$142
Trip.comUS$175
View all 15 deals
Prices are the average nightly price provided by our partners and may not include all taxes and fees. Taxes and fees that are shown are estimates only. Please see our partners for more details.
kristym964
Kuala Lumpur, Malaysia
273

Would not recommend this place! Rooms extremely dated and service terrible.

Upon arriving at the hotel the gentleman at reception was grumpy and definitely not welcoming. Our room was located just off reception and the view from the windows looked straight onto construction they were doing to the hotel. My husband and son went for a walk to check out the restaurant and pool whilst I got unpacked. They were stopped and told they couldn't enter the pool area without robes (which you had to hire) and children definitely weren't allowed. If this is the case it should be stated on the website or prior to booking as we were looking to use the pool with our son. We opted to eat elsewhere for dinner as didn't feel welcome at the hotel and didn't want to pay for an average dinner. Breakfast buffet was ok, we were seated at a table for 2 with an extra chair placed for our son but no extra cutlery given. We were really disappointed in the hotel overall, it is quite dated, especially the rooms and parking is inconvenient to the entry of the hotel. If we had been staying more than one night we probably would have looked for somewhere else to stay.More

Show less
Room tip: Make sure you specify a room with a view, and not of the construction site.
Google Translation

Thank you for your rating. Unfortunately we were not aware that you are traveling with a child, as you have booked only a small double room for 2 people. For hospitality we did not charge the child.
We ask for your understanding that our SPA area is only available for our adults looking for recreation

Report response as inappropriateThank you. We appreciate your input.
This response is the subjective opinion of the management representative and not of TripAdvisor LLC
See all 75 reviews
Nearby Hotels 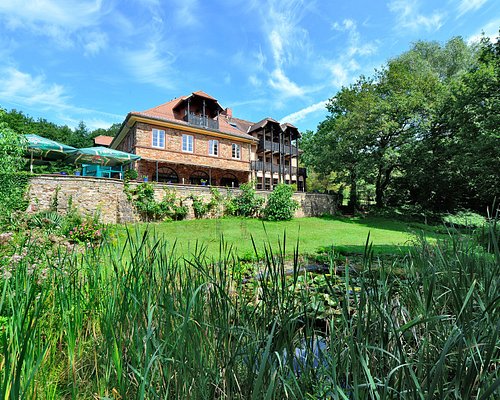 Hotel Haus Neugebauer
US$98
Booking.com
View deal
Priceline
US$98
eDreams
US$98
Agoda.com
US$99
View all 14 deals from US$98
37 reviews
1.7 km from AKZENT Waldhotel Rheingau

Priceline
View deal
Free cancellation
Reserve now, pay at stay
eDreams
US$117
Booking.com
US$117
Agoda.com
US$117
View all 7 deals from US$117
12 reviews
2.4 km from AKZENT Waldhotel Rheingau
We compared the lowest prices from 7 websites

Expedia.com
View deal
Free cancellation
Pay up to 12X
Booking.com
US$135
Hotels.com
US$135
Priceline
US$135
View all 15 deals from US$135
139 reviews
3.8 km from AKZENT Waldhotel Rheingau
We compared the lowest prices from 15 websites
Breakfast included
Fetzer's Landhotel
US$150

Expedia.com
View deal
Free cancellation
Pay up to 12X
Priceline
US$149
Hotels.com
US$150
Booking.com
US$149
View all 12 deals from US$149
100 reviews
5.7 km from AKZENT Waldhotel Rheingau
We compared the lowest prices from 12 websites
Top Rated
Relais & Chateaux Hotel Burg Schwarzenstein

Hotel food is horrible, service non existing and cancellation not known to the hotel management. Never ever again! And finally the hotel manager even hangs up on you at the phone as he didn't like to be confronted with his bs service. They are only after the quick money and there is zero service.

This review is the subjective opinion of a TripAdvisor member and not of TripAdvisor LLC
Lisa L
21
Reviewed May 17, 2017 via mobile
Walkers don't bother stopping

I had lunch here and order a coffee. I asked for some tap water to go with it. They refused! I think this is so CRAP! I was going to try the wine but didn't as it was a bit day and I didn't see why I should buy another drink at a place that refused me water.

The hollandaise sauce with my asparagus was too runny no doubt eeked out with their unavailable tap water.

Wonderful quiet location, clean rooms and friendly staff, phantastic breakfast buffet.
My room had two beds, but two people would not have been very comfortable. The bathroom is even tinier: to use the towel after the shower without getting bruised means leaving the bathroom door open. Wifi and cell phone reception only in selected corners of the property. Great casual wine restaurants in walking distance.

This review is the subjective opinion of a TripAdvisor member and not of TripAdvisor LLC
allyphant
Singapore, Singapore
7665
Reviewed June 7, 2016
It was okay.

I stayed at this hotel in early May for a corporate meeting. The room was okay, clean, and basic amenities were provided. The food was also just okay, nothing to shout about. The meeting rooms were nice in that it had floor to ceiling windows and so it was rather pleasant even though we had to be cooped up in the meeting room most of the day.

I did not like this hotel very much, but I will admit that this is my personal subjective opinion. I am not a fan of the wilderness and being so far away from a town. I feel very stranded in such places. That being said, I understand that some people like this sort of seclusion. There is a bus to the town but the same bus did not take us back to the hotel and we had to walk back some 800m from the next nearest bus stop. The hotel is also rather dated but at least it was clean... some would call it charming I guess.

If you like being in a quiet, peaceful place, away from the hustle and bustle of the city, and surrounded by greenery, then this place is for you. There are nice vineyard restaurants nearby and F&B outlets in other hotels in the area. So I could see that being a relaxing holiday for some, just not for me.

This review is the subjective opinion of a TripAdvisor member and not of TripAdvisor LLC
Hans-Olav J
Telemark County, Norway
9635
Reviewed March 23, 2016
In the middle of nowhere, but the hotel and restaurant have its quality

I did a last minute booking for this hotel because conference in Frankfurt and all hotels near airport where full booked. When arriving to Akzent Waldhotel it was a just before sunset and the hotel are located in a rather dark valley - and I was a bit skeptic to the place. The hotel are build over several floors and half-floors, if you have moving disabilities make that clear to the front desk, its a lot of steps up an down before getting to your room. I got a room in 3 floor with pitched roof and you might get a claustrophobic feeling. But the room had a good size and very quiet. The bathroom was ok, except that it was not possible to stand and take shower, the bath tub was under a very pitched roof and sometimes its unpractical to stand on knee in the tube and take shower.... Very good breakfast.

Thank you for taking the time to describe your experiences and play us which were noted criticisms.

Report response as inappropriateThank you. We appreciate your input.
This response is the subjective opinion of the management representative and not of TripAdvisor LLC
View more reviews
PreviousNext
12…13