Hotel Plein Soleil
Lock in the lowest price from these sites

Travelocity
Snaptravel
Hotels.com
View all 10 deals
Prices are the average nightly price provided by our partners and may not include all taxes and fees. Taxes and fees that are shown are estimates only. Please see our partners for more details.
166karstenk
Mainz, Germany
36283

Wonderful hotel with open, beautifully designed public areas. Breakfast is served inside and outside. The pool is OK. The room in a small cabin was nice, well-designed. There was a view of the bay from the room. Only downside was the somewhat small shower that wetted the toilet and exit to the room. Road access is confusing and GPSs may misguide. The last couple 100 metres are pretty rough but can be done carefully with any rental car. Just go really slowly around the potholes. What you get is a quiet location. Recommended.

Trip type: Travelled as a couple
See all 273 reviews
Nearby Hotels 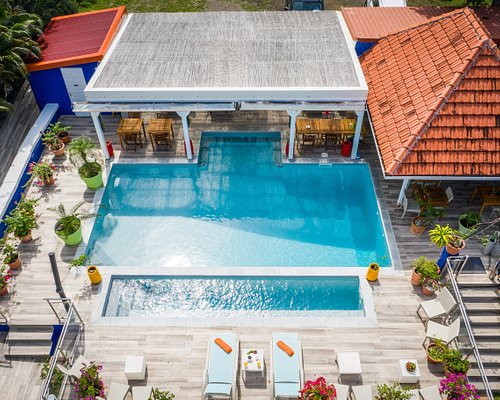 Hotels.com
View deal
Booking.com
US$136
Priceline
Agoda.com
US$136
View all 11 deals from US$136
208 reviews
5.4 km from Hotel Plein Soleil
We compared the lowest prices from 11 websites

Taking safety measures
We compared the lowest prices from 9 websites 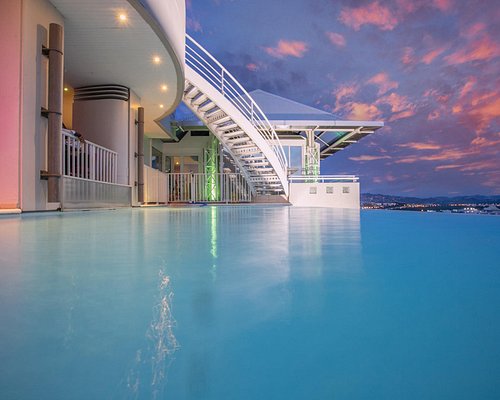 My wife and I stayed in one of the garden view rooms with a small private pool. The room was very nice and had a very large covered veranda with a kitchenette with everything you would need to fix a meal. There was a small room next to the pool with a second bed, shower, and toilet. Breakfast was very good with a large variety of fruits, pastries, and cooked eggs, all served at your table. We had a choice of two fixed menus each night, both of which were very good if you like deluxe French style cooking, and of course a bit on the expensive side.
The hospitality and service of the manager and his staff could not have been better. We got lost coming in at night and did not arrive until 10 PM, after the kitchen was closed, but they still prepared a meal for us. The only downside to Hotel Plein Soleil is the rough and twisted road getting there. Postal addresses on Martinique rarely work on Google maps, or the GPS in our car. We discovered that if you enter the town near your destination and then expand the map the hotels, restaurants, and other attractions usually appear.
Le Francois was well situated for us to visit things in the middle and southern parts of Martinique, and we found the roads good for a Caribbean island.

This review is the subjective opinion of a TripAdvisor member and not of TripAdvisor LLC
alwaysready1981
Auburn, New York
189
Reviewed February 24, 2019
Nice, BUT....

We made reservations well in advance, and were advised, and sent photos, of the room we paid for. That was NOT the room we received, but no complaint, as the room given us, without explanation, was somewhat similar, and clean. On arrival, though, finding the place was a trip in itself! Firstly, as the hotel is about a half hour from the airport, I had sent FOUR (4) e-mails, and telephoned twice to obtain accurate directions to the hotel. I never received the courtesy of a single response from the hotel, so we decided our only option was Google Map. Don't do that! Even Google doesn't know how to find this place! It took us over one and a half hours wandering that part of the island before finally finding a sign for the hotel. This was well after dark, on narrow, winding roads, and the signs are all BLACK...great for night-time vision! After finally turning onto the correct road way to the hotel, the fun really starts. Others have commented about the treacherous roadway, but it can't be appreciated in written form! Imagine driving off the main road, onto a rutted, partially broken concrete, rock and dirt, twisting, one lane roadway, for about a kilometer. That road then ends at the edge of a banana plantation...and becomes really bad! From there on, for about another kilometer, it's similar to driving over a recently plowed corn field, except there are deeper holes and ruts! It's at that point, you begin feeling sorry for the car rental company.
When you arrive at the hotel, it just takes a few minutes for your major internal organs to fall back into their proper places (hopefully), and you have a chance to appreciate the hotel. Unfortunately, you also realize it will be necessary to traverse these roads, to leave the hotel for any reason. The hotel is situated overlooking a small bay, and most rooms have an attractive view, and are clean.
After looking at issues provided in other reviews, though, it appears the management (is there really management? We certainly never saw a "manager") isn't interested in taking care if issues brought out, but, instead, responding with excuses and platitudes.
The breakfast is very nice, with plenty of fresh fruits, pastries, and made to order egg dishes. Dinner....well prepared, but a choice of only two items each evening...and not inexpensive. If you want something different, of course, close your eyes, hum your mantra, and head out in the dark, along one of the worst roads in all Christendom. But...just think of it as a challenge.
Need wi-fi, for personal or business uses, as I did? In spite of allusions in the advertisements, that wi-if is available in the rooms, that is an "illusion". It's not. You are able to walk to the hotel lobby and wi-fi does trickle to your computer, if you're patient.
If you have already booked the hotel, though, don't despair. It is well tended, and clean, with attractive gardens, and ample outdoor lounging areas by each room, for sunning, or watching the vistas. Also, contrary to some other reviews, we found the people working there to be very helpful and friendly...particularly Michel and Robin, and would love to see them again.

This review is the subjective opinion of a TripAdvisor member and not of TripAdvisor LLC
Karen T
4
Reviewed January 2, 2019
Excellent Hotel

We just stayed there for a week and we had a wonderful stay.
Beautiful location and decor as well as an accommodating & pleasant staff.

The Breakfast was amazing. Full Breakfast w good coffee and nice selection of Fruits/Yogurt/pastries and eggs. We liked the dinner but the breakfast really shines. Dinner is somewhat limited and fairly expensive. I would explore other restaurants as the food in Martinique is excellent. Would also be nice if they had snacks and lunch/lighter menu since it is pretty secluded there and not easy to get a snack.

We had one of the smaller rooms without a private pool but we still loved our room. The pool that is for all is quite nice and a gorgeous view. Only negative about room was bathroom was constantly soaked from open shower. It a design flaw and should be fixed.

Had a great trip and will be back.

Thank you for taking the time to share your experience after your stay at the hotel.

It is a real pleasure to read you. I am delighted that the stay was up to your expectations.
Thank you for having noted the quality of the restoration.

For the bathroom, I recommend for a next stay a higher category. You will enjoy it.

Hope to see you soon,

Report response as inappropriateThank you. We appreciate your input.
This response is the subjective opinion of the management representative and not of TripAdvisor LLC
Karl S
Washington DC, District of Columbia
2826
Reviewed December 11, 2018
An intimate escape

Stayed in a Garden Suite, which is huge and located at the bottom of the hill near the shared pool and is very private. Main difference from Master Pool seems to be the larger bedroom and bathroom and deck area, and view is of the hillsides instead of the water. The private pools are what really make this place stand out from other hotels -- no swimsuit necessary. Food in the restaurant is superb, especially for dinner. Breakfasts consist of cooked to order scrambled or fried eggs plus fresh fruit, pastries, yogurt, etc. The road is long, twisty, steep, very narrow in sections, muddy over the last stretch, and a challenge to navigate the turns, especially in the dark. There are small white signs that are easy to miss, but look for them and ignore Google Maps after turning off the main road! You will dread every time you have to drive to/from the resort, so this place is best for guests who want to stay in and have most meals on property rather than exploring the island. I do recommend at least one trip to Grand Anse beach, however, especially if you scuba dive. It is about one hour drive from the hotel. Diamond Beach was less impressive -- I would skip it. The staff are wonderful, but most speak very little English, so it can be challenging. Only real complaints are the terrible road, the lack of any wifi in the room (and painfully slow in the main lodge), and the mosquitos at dinner (bring repellant) -- our ankles were covered with itchy bites after the first dinner.

Thank you for taking the time to share your experience following your stay at the Plein Soleil hotel.
Delighted that you enjoyed the stay.

Hope to see you soon,

Report response as inappropriateThank you. We appreciate your input.
This response is the subjective opinion of the management representative and not of TripAdvisor LLC
Poppycat18
Cambridge, United Kingdom
7843
Reviewed March 18, 2018
Lovely hotel with stunning views

Just returned from a 3 week break in the French Caribbean. We stayed here 9 nights and thoroughly enjoyed our stay. The food was excellent and the service provided by Christina and her colleagues was exceptional. The hotel is perched on a headland high up overlooking a bay. It is very airy and tastefully decorated and furnished. Our room was very spacious and well designed with all that we needed. We particularly enjoyed the sun sets over the mountains. However, the vehicular access to the hotel was very precarious as the last kilometre was on a very rough and unmade road. Also upon arrival the greeting we received was unfriendly and not welcoming. The only time we made acquaintance with who we believe was the manager was when we paid the bill at the end, not particularly customer focused, especially as were staying for 9 nights whilst most guests only stayed for 2 to 4 nights.
Having said all this I highly recommend it.