Not the camping type but WOW! - Review of Scarabeo Camp

CheapTickets
StayForLong
Prices above are provided by partners for one room, with variable occupancy rules as provided by the property, and do not include all taxes and fees. Please see our partners for full details.
LuxeTourista
Toronto, Canada
3303371

Not the camping type but WOW!

This place blew my mind! I came here for a girls weekend and it was the best time we could imagine. Everything from the comfortable tents to the amazing cuisine was amazing - you seriously don't go without here. If you are visiting the Marrakech area, this camp is a must do! It is a short trip from then city and 1 night disconnecting and enjoying the beautiful scenery of the stone desert with the atlas mountains in the background is totally worth it. The wifi/service is weak but I feel like its the best way to enjoy the camp. Take a camel ride around the area and soak up the beauty of this amazing country. I highly recommend for a friends/family trip or a getaway to connect with a significant other. I have posted several photos on my instagram blog @luxe_touristaMore 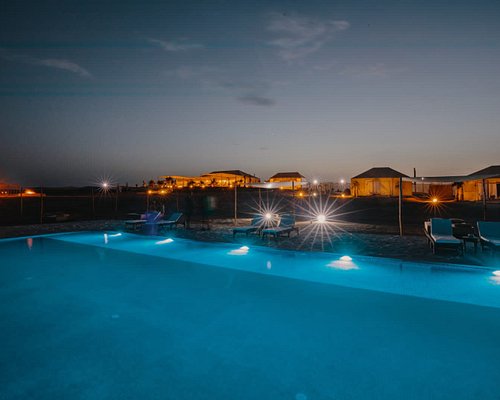 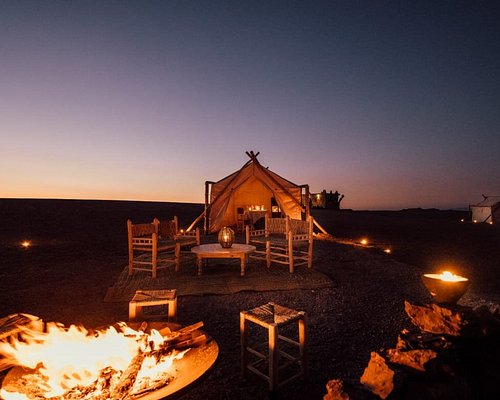 Keeping the tradicional mint tea, you arrive at Scarabeo camp and you are hosted and recieved with a very friendly staff and mint tea. Scarabero camp is a desert experience with all you can have, camel rides, great accommodation, great food and great staff. Everybody always very helpful and the place to have a rest away from the daily busy life.

This review is the subjective opinion of a Tripadvisor member and not of TripAdvisor LLC.
Hwa-Shih L
Los Angeles, California
1153
Reviewed May 29, 2018
Transported To A Different Time, Absolutely Magical!

My son and I stayed for 1 night at Scarabeo and I am so glad we did as it was a highlight of the trip. Initially I debated whether the cost was worth it and whether the camp will live up to the expectations we had. My "discerning" teenager loved it especially there were many great instagram worthy pictures and I just loved the beauty of it and the added bonus of sharing something unique with my son which is harder to come by these days.

What makes Scarabeo so special:
- the decor of the tents and common areas; they absolutely make you feel like you are in explorer ready to discover something amazing
- for glamping, it was extra nice that each tent had its own private bathroom with camping style toilet and tents had a fire stove that heated the tents at night. There was also a device to charge devices but you need your USB charging cord
- the staff - they were all very nice and accommodating
- the food- highly recommend you prolong your stay by having lunch - there was an array of different veggie dishes in small bowls, meat kebabs, rice and bread
- we were there in early April so wildflowers were abundant and we enjoyed walking up different hills and checking out the surrounding area
- the stars at night - I think it was the closest I have ever seen orion's belt and the stars were so close and bright I thought I could touch them

Lastly, nothing beats having a bottle of Rose ($21) & homemade corn nuts while sitting in your personal cabana patio and doing absolutely nothing.

This review is the subjective opinion of a Tripadvisor member and not of TripAdvisor LLC.
Cameron M
Winnipeg, Canada
138
Reviewed May 16, 2018
Slowed Down Glamping

We stayed two nights at Scarabeo. It was a much welcomed break from the bustling Marrakech. We checked in and had our luggage brought to our tent as well as some mint tea (of course). Time definitely ticked slower here. Very relaxing place. We just chilled, read out books, lounged, hiked, and took in the views (amazing sights of the High Atlas mountains). I would agree with some other posts that the management is quite laid back (they screwed up our camel ride and weren't the best at explaining why, although we only speak English so that may have contributed a bit).. Even the camel ride was a bit overrated as I hiked the path a few times and its not much. But hey, now I can say I rode a camel.

The food was great there. You have the standard Moroccan breakfast, lunch was a nice mix of food and the dinners were Tagine this or that. The decor was great, but it did get quite hot as you are in a desert (although locals will remind you that it is not, in fact, the real desert). My favourite part was the break from being hounded by all the people in Marrakech, and not having to pay for everyhing then and there. Im also glad we did two nights because with packing and unpacking I don't feel I would've been able to unwind as much as I did.

This review is the subjective opinion of a Tripadvisor member and not of TripAdvisor LLC.
Alice S
London, United Kingdom
7270
Reviewed April 19, 2018
What a place, magical and unique experience

My friend and I recently spent one night at Scarabeo Camp and had a wonderful experience - what a magical place. We stayed in one of the Superior Suite Tents which highly exceeded our expectations - the tent included a huge double bed, coal fire (which was lit early evening) and lovely antique decor. During our stay we did a camel ride and a yoga class, both of which were really enjoyable. The food we ate was excellent - lots of tasty, healthy Moroccan meals. During the day it was unbearably hot and too hot to be in the tent, but as long as you're happy relaxing in the shade with a book then you will be content. Nighttime at the camp was the standout memory for us - the whole camp was illuminated with candles, lanterns and bonfires which made for a very atmospheric evening. The star gazing was incredible. My only criticism would be that the staff, however lovely and helpful, were quite disorganised and scatty. On a few occasions we had to repeatedly ask for drinks we'd ordered.

I must admit that I am rather confused by a lot of the negative reviews about the camp - many people complain about it not being a real desert, but the Agafey Desert is a stone desert, something which Scarabeo make very clear on their website. If you're expecting golden sand dunes, you'll need to drive hours to the Sahara - not 45 minutes outside of Marrakech. Also - yes, there is no doubt that it is expensive but for such a unique and memorable experience it really didn't matter for us :)

I would highly recommend Scarabeo if you're looking for a unique desert experience within easy reach of Marrakech.

This review is the subjective opinion of a Tripadvisor member and not of TripAdvisor LLC.
zoenicole819
San Francisco, California
2019
Reviewed April 16, 2018
wild dogs, no heat and no desert

I was so excited for our trip to the desert outside of Marrakech. So much so, that we planned our entire trip around Scarabeo camps availability. It was supposed to be a desert but in the winter when it rains it’s slightly green and, as we learned, it does rain and gets very cold at night. Wild dogs surrounded our tent at night and our screams went unheard. It was a miserable night and I wouldn't recommend putting yourself through it.

This review is the subjective opinion of a Tripadvisor member and not of TripAdvisor LLC.
View more reviews
PreviousNext
1…789…