Great base for the spectacular Lofoten islands - Review of Villa Reine 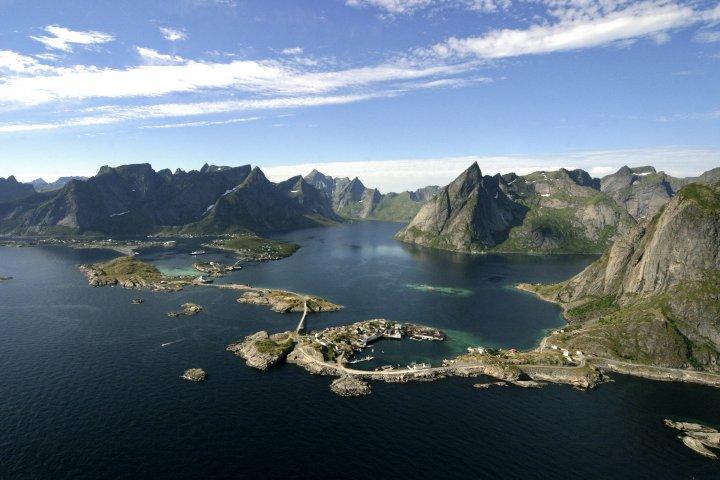 Excellent - based on 2 reviews
Write a Review

5 helpful votes
“Great base for the spectacular Lofoten islands”
Reviewed September 6, 2014 for a stay in August 2014
4
people found this review helpful

We have just returned from a wonderful holiday in Lofoten, staying at the Villa Reine. Lofoten is just amazing – the most beautiful place I have ever been to. I can’t recommend it highly enough! If I could, I would give 6 stars to Lofoten and 4 to the house.

The house was basically what it says and was well kitted out. There is a spacious lounge and dining area and a well equipped kitchen. The terrace has very nice views along the coast and is equipped with a barbecue and a hot tub. There are 3 upstairs bedrooms (1 double, 2 with bunks) which are comfortable. We found some of the doors were stiff, to the extent that we thought one bedroom was locked and unavailable so we didn’t use it (we discovered on the last day that the door was in fact just stuck and we could have used it after all!). There is also a double bedroom in the basement, which is dark and less comfortable but somewhere to sleep if needed. Bedding was stored in the wardrobe in the master bedroom. The attic was in the process of being converted when we were there and will make a lovely room when it is finished. There is only one bathroom and toilet, which may be a limitation for a largely party.

The instructions that came with the house were good, though there were a few places where a little more detail would have helped. Here are some of the points we found.

Finding the house from Moskenes Ferry - we found the directions not terribly clear, here’s my version: exit the ferry complex, turning right onto the E10. Go through 2 tunnels; take the first right turn after the 2nd tunnel, signposted to Reine. Take the 1st right (after 200m) and the 1st left (after 20m). The house is immediately on the right.

Shops – throughout Norway the shops are closed on Sunday, the only exception being that some petrol stations sell food and fishing equipment; it took a while for this to sink into our British mind-set! There is a Coop 2km north of the house on the E10 which is open until 7 most evenings (6 on Saturday, closed Sunday). This has a good selection of groceries and you will find most things you need here. If, like us, you catch the Saturday late afternoon ferry from Bodø you arrive too late to shop here and it is not open until Monday morning. Fortunately, the Statoil garage in Reine (a 5 minute walk from the house) has a shop which is open until 10 p.m. every night (when we were there) and sells a more limited selection of groceries, but enough to knock up a meal or two. If hiring a car in Bodø, you may want to shop there before catching the ferry – the big Coop was open until 11 p.m. during the week and has an excellent selection. Be prepared for everything in Norway to cost at least twice as much as in the UK!

The bakery at Å is well worth a visit. We found the 16km return cycle ride to buy hot fresh bread straight out of the oven made a nice pre-breakfast outing, though be warned that the time the first loaves are ready varies considerably.

We had 2 people with special diets: 1 coeliac (gluten free) and 1 vegetarian. The supermarkets seem to cater very well for gluten free diets with a good selection of specialist foods (I can recommend the buckwheat pancake mix!). The Reine Coop stocks a good selection (though the Coop in Bodø had the best selection we saw), but the Statoil garage does not. Norway doesn’t seem to get vegetarian diets and on the one occasion we ate out, our vegetarian ended up eating a plate of chips!

The kitchen was well equipped and had most things, though it took us a while to find where some items were stored. The electric kettle blew the lights and we then had to hunt round the house in the dark to find where the circuit board was (at the top of the stairs) – we used the hob kettle from then on.

The house comes with 2 single-man kayaks and there is a nice launching place nearby (left out of the house, left, 1st right, through the children’s playground). We didn’t find any wetsuits or dry bags at the house which limited our adventures (the water is very cold). Reine Adventure had dry suits but didn’t want to rent them to us for some reason. If you want to use the kayaks, I recommend bringing your own wetsuits and sealed dry bags.

There were 3 bikes, 2 of which were in working order.

The house comes with several fishing rods, but only 2 of them were in good condition. The fishing itself was amazing, I have never seen anything like it – there are SO many fish. We went spinning from the shore most days and caught mackerel or small coal fish every time. We also went on a boat trip from Svolvaer (the local fishermen seemed to have all finished for the season by the end of August) and caught around 30 good size fish: ling and tusk. Fishing gear can be bought at the Coop or at the petrol station (we lost quite a few spinners).

Mountain walking – we found some route descriptions on www.68north.com. Based on this, we walked up Ryten in the north of Moskenesøya (stunning views) and then went to Kvalvika beach. We found the map wasn’t entirely accurate (in 1 place we found 2 small lakes where there is 1 on the map). The route was somewhat harder than he suggests (the path off Kvalvika beach crosses a boulder field), but was definitely still a walk rather than a scramble and made a fantastic day out. The beach was somewhat disappointing, the sand being polluted with oil and having a large pile of rubbish in 1 corner.

We went to Ramberg beach on two occasions – beautiful!

In short, Lofoten is very highly recommended and this house is an excellent place to stay.

Date of stay: August 2014
Liked best: The location
Liked least: We missed 1 bedroom because the door was stuck
Travelling group: Extended Family
Would you recommend this hotel to a friend?   Yes.
Recommended for:
Was this review helpful? Yes
This review is the subjective opinion of a TripAdvisor member and not of TripAdvisor LLC
Problem with this review? Thank you. We appreciate your input.

All was as described by the owner, Reine is really one of the most beautiful city of the Lofoten.

We had a great view on the sea from the house, and enjoyed the BBQ on the terrace.

All the specified equipments were here and in order.

Date of stay: May 2014
Travelling group: Friends
Would you recommend this hotel to a friend?   Yes.
Recommended for:
Was this review helpful? Yes
This review is the subjective opinion of a TripAdvisor member and not of TripAdvisor LLC
Problem with this review? Thank you. We appreciate your input.
Updating list...
Do you own a vacation rental? List it here.

Looking for a place to stay in Reine?
View all 2 vacation rentals