A wonderful fortnight - Review of Moose Hotel and Suites

Moose Hotel and Suites
19 people are viewing this hotel

US$385
US$331
View deal
Free cancellation until 21-08-05
Expedia.comUS$360
Booking.comUS$360
ZenHotels.comUS$385
View all 17 deals
Prices are the average nightly price provided by our partners and may not include all taxes and fees. Taxes and fees that are shown are estimates only. Please see our partners for more details.
davidhI7504LS
Whitchurch, United Kingdom
91

We had stayed in Banff before but this hotel was new and recently opened. It is of an upper mid range standard, not five star but nearly there! It is built in a mountain style which means that every room can be reached from outside so if there is snow about it is on the entrance pathway to each room. The staff however work hard to ensure access is easy. Our room a suite with a large double bed and a sofa bed, we were a party of three adults, was comfortable and well appointed. There was a microwave, toaster, kettle, coffee machine and adequate supplies of coffee, tea etc. The hotel has an indoor pool, and two hot tubs, great after skiing! All the staff were helpful and friendly. We found there was very little to fault and that previous criticisms are now unfounded. We thoroughly enjoyed our stay and are likely to return again. Ski storage was available and steps from the storage area almost to the ski bus stop. A great place for a skiing holiday.More

Show less
Room tip: The larger suites on the fourth floor are quite capable of taking four.
See all 1,398 reviews
Nearby Hotels 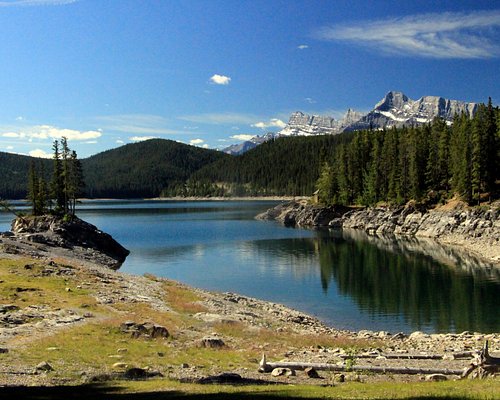 Fairmont Banff Springs
US$528
Booking.com
View deal
Free cancellation
Reserve now, pay at stay
Priceline
US$528
Traveluro
US$445
Hotels.com
US$480
View all 14 deals from US$445
8,942 reviews
1.9 km from Moose Hotel and Suites

Taking safety measures
Banff Inn
US$223
Booking.com
View deal
Free cancellation
Priceline
US$159
Hotels.com
US$233
Trip.com
US$230
View all 15 deals from US$159
1,138 reviews
0.6 km from Moose Hotel and Suites
We compared the lowest prices from 15 websites
Banff Caribou Lodge & Spa
US$240

Taking safety measures
We compared the lowest prices from 15 websites
Bow View Lodge
US$212
Booking.com
View deal
Free cancellation
Reserve now, pay at stay
Expedia.com
US$200
Hotels.com
US$200
Priceline
US$212
View all 15 deals from US$200
1,221 reviews
0.5 km from Moose Hotel and Suites

This place was perfect with it's big restaurant with great food and brand new rooms! The prices were a little on the higher end but were justified as you get a great experience from top to bottom! Very happy with our stay at the Moooooose!!! Hotel.

This review is the subjective opinion of a TripAdvisor member and not of TripAdvisor LLC
Queenlisab
Winnipeg
197123
Reviewed April 5, 2018
Poor wifi & sound proofing! Not worth the $$$$.

For a newer hotel and all the hype about it, it's a letdown! We stayed there in March/April. We had the second to best suites in the building and were not impressed. We had a view of the side of the house which is in the middle of their courtyard.

The décor leaves something to be desired. The moose artwork is nice but that's about it. The little bit of marble in the bathroom does not make up for the poorly laid out room. The rain shower is attached to the side of the shower wall along with the handheld shower. And as others have stated, it's fine for someone shorter but a taller person would have issues.

The kitchenette could use some extra lighting - under the sink/cupboard area. They do have a toaster, dishes and utensils, kettle and one of those mini coffee machines (the pod type, not the Keurig kind). The coffee is AWFUL. Seriously! This hotel went cheap on a lot of items.

The fireplace is a nice touch but there's something wrong with it, every time it shuts off, it makes a big banging sound. But it was nice to have it going after a chilly day in the mountains.

As for the layout of establishment, all the rooms have doors to outside. You walk into the hotel, get your keep, and then step outside to head to your room. It's just an odd design the way the rooms are set up inside… there are better ways to utilize the space.

The Wi-Fi is absolutely awful! Do not tell me that it's the norm for the area because we know otherwise. If you can get on the Wi-Fi early when no one is up and about, it's tolerable but when folks are going about their day, it's a snail's pace if you can even get it to work. It's extremely frustrating for tech savvy folks like us.

As for the soundproofing, is there actually any? We could hear our neighbor's baby/toddler screaming its head off, the neighbors opening/closing doors, moving their chairs upstairs, etc.

There's a swimming pool on the 4th floor and two outdoor hot tubs, sauna, and a fire pit area. We did enjoy the hot tub and sauna - we had the roof top all to ourselves. It was nice!

However, for the price you pay for this spot, I'd recommend going elsewhere. We wouldn't return.

Suggestions: Offer fresh coffee or hot chocolate, and flavor infused water at the front lobby area. There are plenty of hotels that do this and it's a nice touch. It doesn't make up for the poor internet connections or soundproofing but those little touches make your establishment appear more inviting.

This review is the subjective opinion of a TripAdvisor member and not of TripAdvisor LLC
LW C
Atlantic City, New Jersey
11055
Reviewed April 5, 2018
Perfect Location!

Pro’s:
Awesome location! Walk to restaurants & shops.
Hotel has 2 hot pools, an indoor pool & fire pit.
Free transportation in town and to the Ski Mountains. You can purchase your lift tickets right at the hotel front desk!
Friendly, approachable staff.
We love the simple rustic/modern décor.
Restaurant on site.
Con:
The heating unit in our room, was either too cold or too hot. We just couldn't get it balanced which caused us to wake up every morning with a dry nose, mouth and headache. We recommend a small humidifier and aspirin to get you through the night. Otherwise everything else was so wonderful, we still have to give this hotel 5 stars!

Stayed here for two nights at the end of March. The location is really convenient to everything in town. The room was clean; my only complaint is that it was well below freezing out, and their rooms open up to the outside, so every time we wanted to leave our room we had to walk a considerable distance in the freezing cold to get to the main part of the hotel.
The hot pools on the upper pool were extremely relaxing with an amazing view, which is the main reason I booked this hotel! It didn't disappoint.
Overall, we enjoyed this hotel despite the cold walks from our room to the main lodge!

This review is the subjective opinion of a TripAdvisor member and not of TripAdvisor LLC
TravelGeekGirl
New York City, New York
15366
Reviewed April 4, 2018
Comfy Mountain Hotel - Best in Banff

Banff is a beautiful town but you won't find any 5-star resorts here. This hotel has all of the amenities you need. It's clean, everything is new, comfortable and practical. There is a large roof deck with hot tub, a pool, and a small gym. There is also a restaurant and indoor parking garage (helpful in this freezing weather). There is a small self-service laundry room as well. Our room was a one-bedroom with a pullout couch for the kids. It was more than enough space and there is even a small kitchenette that makes snacks and breakfast easier. It's also around the corner from a super market and walking distance (2 blocks) from all of the Main Street stores and restaurants. I don't think there is a better choice in Banff.