The snot hole - Review of The Burntwood Hotel

TravelocityUS$93
Lol.travel
Orbitz.comUS$93
View all 15 deals
Prices are the average nightly price provided by our partners and may not include all taxes and fees. Taxes and fees that are shown are estimates only. Please see our partners for more details.
S D
Manitoba, Canada
53

Sadly, I had to stay here this past week. A couple of the staff were very nice, and as helpful as they could be. BUT.... The smell in the room is only exceeded by the smell in the hall. Oh, and don't forget all the decorative snot balls about the room and bathroom. There is a welcoming committee as you enter, asking for money, and whats in the bag?
I could go on and on, but I think you get the picture. One star, only because I can't do half of one! Plan ahead, or sleep in your vehicle at the Safeway parking lot!

Room tip: To choose a good room, try searching hotels in Thompson and stay elsewhere!
See all 21 reviews
Nearby Hotels 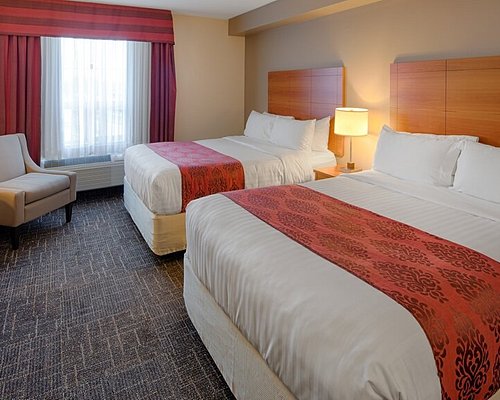 Breakfast included
Days Inn & Suites by Wyndham Thompson
US$152
US$143
Tripadvisor
View deal
Free cancellation
Pay up to 12X
Hotels.com
Booking.com
US$142
ZenHotels.com
US$152
View all 18 deals from US$142
171 reviews
0.5 km from The Burntwood Hotel

Expedia.com
View deal
Hotels.com
ZenHotels.com
US$121
Travelocity
View all 15 deals from US$121
66 reviews
0.7 km from The Burntwood Hotel

It looks OK from the outside, but inside, it is a different story! The staff were rude and the amenities in the pool did not work. While checking in, 2 people entered -one with a knife attempting to kill the other. The front door was damaged in this process. The rooms are not in good repair - door frames broken and furniture smashed. I was told that this was the last hotel room available in Thompson and it would take at least that to get us back!

Room tip: Take the advice of Tripadvisor or Expedia and go to one of the places they suggest.
Ask Jim P about The Burntwood Hotel
Thank Jim P

This review is the subjective opinion of a TripAdvisor member and not of TripAdvisor LLC
Jim R
South Indian Lake, Manitoba, Canada
2917
Reviewed February 14, 2017
I'll sleep in my truck before I EVER stay in this dump again! Oh and step around the drunks on the way in.

We checked in to attend a friend's young son's birthday pool party around 3:30 p.m. Immediately several things came to mind. First our neighbours were having a drunken yelling match, second the chairs were cracked and looked like they came over on the Ark. The carpet was dirty and so old, it too must have arrived on the Ark.
Bad enough and then we went to the pool. The water was cold, the hot tub while filled with what can charitably be called water was not operating and a kiddies pool sat empty with huge rust stains on the liner. The walls had large dark stains in several places and the emergency out door exit was covered in ice, not frost, ice. While I did not try to open the alarmed door, I have serious doubts that it would open if needed.
Fast forward 2 hours. My young son and I go down the hall to go to the parking lot. I heard no fewer than 4 loud drunken arguments through the doors including one which featured a woman screaming that she was being hit. I informed the desk on my way out. I also told the desk clerk that the people in the room next to ours continued to yell and scream. I told the clerk that I wanted a different room. I was promised one.
An hour later my son and I returned. The yelling next door continued unabated. During my absence, my wife had spoken to the front desk clerk about this who told her that hotel security couldn't do anything about it. My wife suggested contacting the RCMP which apparently they did. The clerk also informed my wife that they only room they had for us to move into was one with a single bed. Fortunately by now our e=neighbours had been removed or passed out.
When I went to check out I asked the clerk, a woman I had seen on past stays where the owner could be contacted. She told me he lived down south and could not be contacted. I asked her if there was any plans in the works to renovate this once nice hotel and she informed me that the short answer was no..
Having spent nearly 10 minutes waiting to check out and to speak to the clerk we proceeded on to the Grapes Restaurant for which we had a coupon from the hotel for a complimentary (minus beverages) breakfast until 11:00 a.m. I arrived at 11:02 and was informed by first the waitress and then the manager that breakfast was over.
I asked that the manager speak to the hotel clerk about this as the hotel PAYS THE RESTAURANT for the meals but n spite of her best efforts, I was not provided with a breakfast after all the bull S*&t I had gone through. I asked to speak to the owner of the Grapes Restaurant and was informed that he was in a large Asian country and that was that.
I can not suggest strongly enough that no one ever venture into this nightmare of an establishment.
The staff is poorly trained, the hotel dark, dingy dirty and in an advanced stage of disrepair with an absentee landlord who obviously has decided to simply collect as much cash as he can before the place is closed by the health department. The entrance both outside and in the foyer can not see me to be cleared of intoxicated individuals making going in quite intimidating for my 5 year old son. WHAT A DUMP!!!!

Room tip: There are none!
Ask Jim R about The Burntwood Hotel
Thank Jim R

This review is the subjective opinion of a TripAdvisor member and not of TripAdvisor LLC
Mad W
1
Reviewed August 18, 2016 via mobile
Horrible

I booked hotel online and regretted it. The are vagrants all over the hotel, the bed was old and not comfortable. There was black hair in the bathroom that creeped me out. There were loud people outside my window for most of the night. Since my company paid for my room, I left and stayed at a different hotel out of pocket. I did not feel safe there

This review is the subjective opinion of a TripAdvisor member and not of TripAdvisor LLC
Lisa_in_Maple_Ridge
Maple Ridge, Canada
102
Reviewed August 16, 2016
Terrible Entrance

Walking in the hotel is intimidating and if we had not already had reservations at a busy time of year we would have walked away. Many homeless (or homeless looking) people standing right at the front entrance smoking under the "no smoking" sign. Front desk apologized, but the situation did not change that night or the following morning when we left. Friendly staff helpful, but cannot make up for the surroundings. Rooms clean-ish but run down and old. Air conditioning worked fine, however. Loud stamping and voiced in the hall and upstairs.

This review is the subjective opinion of a TripAdvisor member and not of TripAdvisor LLC
ytacr
Vancouver, Canada
1
Reviewed July 3, 2016
Horrible

Traveled to Thompson for business, company booked the rooms. The hotel smelled like stale alcohol and something indescribable. Don't think there has been any updates in years. Very loud at night with people fighting outside. It may have been a nice place once but now it isn't fit for anyone to stay in. We checked in about midnight and checked out the next morning. Do not recommend this hotel.

This review is the subjective opinion of a TripAdvisor member and not of TripAdvisor LLC
View more reviews
PreviousNext
12…
<script type='text/javascript' crossorigin='anonymous' async onerror='__scriptLoadError(this,true);' src='https://static.tacdn.com/assets/EkR174/0e7qB0.39b9df84.es5.js' data-rup='EkR174/0e7qB0.