I have been in this hotel many times ---BUT

I have stayed at this hotel many times and it has improved over recent years. If you do not need to be right downtown Yellowknife it is a good place to stay with groceries and Walmart really handy and not far from the airport. BUT - if you need entertainment during your stay - the WiFi sucks and the TV is marginal. There are many good restaurants in walking distance ( in summer anyway) and even in winter but stay out as long as you can because room entertainment is awful. If you have to have an elevator maybe not as they have two but one is always not working and on rare occasions both are down!More

Show less
Room tip: Rooms facing west have great views but some are noisy if near the road

Thank you Bill for the great comments, and happy that you were able to point out some very good key points to our location.

I would like to touch on the guest Wi-Fi that you point out was sub par during your visit. Our guest Wi-Fi is getting an overhaul and we hope the project will be completed prior to your next stay with us. It has been along time coming and I wish I could provide the exact completion date.

Hope to see you again.

Report response as inappropriateThank you. We appreciate your input.
This response is the subjective opinion of the management representative and not of TripAdvisor LLC
See all 68 reviews
Nearby Hotels 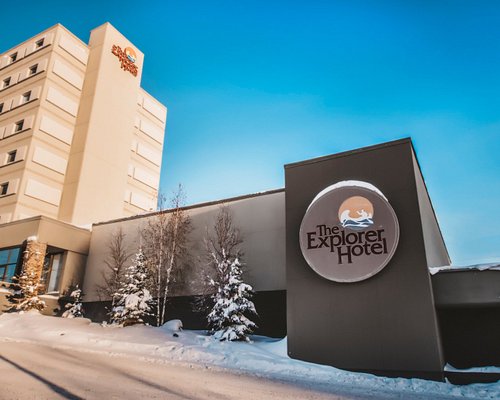 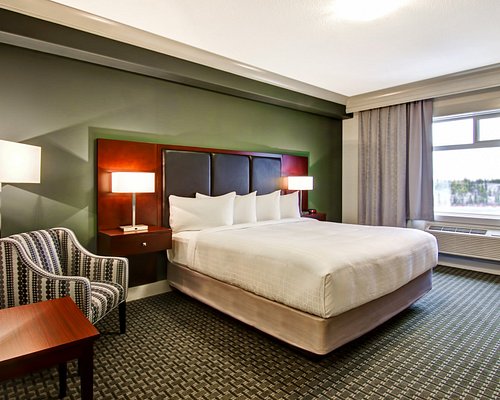 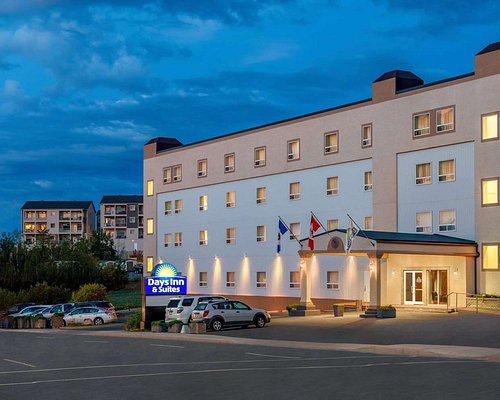 We stayed here for four nights during Christmas holiday. The hotel conveniently located in the area where super markets, restaurants and hospital nearby. There are many parking spots onsite we could easily park our car. Our room is a suite which has a sitting room with kitchen and cooking equipment along with a living area to watch TV. The bedroom is large and clean with comfortable queen bed The bath room is large too and equipped with washer and dryer. Obviously a small family could comfortably stay here. There was a small fitness area near the reception which we did not have time to use. The staff are very friendly and helpful. I would definitely come back again.

We are very happy that we could make your stay a special one, especially during a time such as Christmas. You point out lot of great features of the hotel and we appreciate that as well.

We at Stanton Suites Hotel Yellowknife hope to have an opportunity in the future to host you and your family again.

Report response as inappropriateThank you. We appreciate your input.
This response is the subjective opinion of the management representative and not of TripAdvisor LLC
EatMe420
Comox, Canada
119
Reviewed November 7, 2018
Another Hotel That Should Call itself a Hostel

I am forced to stay here as this place is leased for us at work.

The first year I stayed here, I came back to the suite to find a drunk passed outside my foor (see pic), The interesting thing is there are cameras all over the hallways, but they either don't work, or the front desk staff doesn't bother to monitor them. Having stayed here many times, my money is on the latter.

Shopping carts abound in the lobby and the hallways since the lazy long term guests buy their groceries across the street, and don't bother to wheel the carts back outside afterwards.

One morning, I went down into the elevator to go down to the gym, and stepped into a sticky puddle of urine as someone decided to relieve themselves in it at some point during the night. I told the front office clerk....didn't bat an eye...didn't apologize on behalf of the hotel...didn't clean the mess. He merely told me he would let housekeeping know and locked down the one elevator until housekeeping arrived.

Last year, the internet worked...not great, but it did work. The hotel changed providers and now many rooms have no signal. The internet signal from the pub two blocks away is the same strength as the one from the hotel. I have to go down and sit on the worn out filthy couches in the lobby to get a decent signal.

Some of the gym equipment was in disrepair for almost a year. I tried in vain to explain to one lady at the front counter what needed to be repaired, but I got the same look from my dog when I ask it the time. I actually wrote out in simple English what needed to be fixed at one point hoping the repairs might be done.

The front desk staff does the absolute minimum to assist guests.

The one bright spot is the maintenance guy who does a great job of keeping this dump running.. But he can only do so much, given what he has to work with.

The house keeping staff although pleasant, also do the absolute minimum.

Thanks for taking the time to leave your comments.

Report response as inappropriateThank you. We appreciate your input.
This response is the subjective opinion of the management representative and not of TripAdvisor LLC
E.l B
Edmonton
61
Reviewed November 6, 2018
Fun

Friendly staff and cozy atmosphere. Suites are comfortable and the location is convenient for shopping and walking distance to downtown location. There are also walking trails with scenic views from this location

Ask E.l B about Stanton Suites Hotel
Thank E.l B

Very glad to see you enjoyed your stay with us at Stanton Suites Hotel Yellowknife. Very nice to see you like the location away from the hustle and bustle of down town. Hope to have you stay with us again.

Report response as inappropriateThank you. We appreciate your input.
This response is the subjective opinion of the management representative and not of TripAdvisor LLC
Christabel E
2
Reviewed October 24, 2018
Disgusting disgraceful dirty disorganized unequipped broken lamps and lights hallways dirty and smelly rooms dirty

Disgusting..very disappointing.. rude front desk rooms not ready st 4... last room ready at 6:30pm... no apologies.. they did not have record of our booking of 5 rooms.... then said it was for Dec.... lamps in rooms broken, heater broken in one room.... so heat on high... noisy... was told hotel reserved for family of patients at hospital next door.... room smelt of smoke and amnesties were in poor condition. Check in lady was extremely rude... unable to understand registration process. We were told that they messed up registration because still used DOS program... will upgrade next year...

Room tip: No no no.... cancel your trip if that is all you have
Ask Christabel E about Stanton Suites Hotel
Thank Christabel E

Very sorry to see we were not able to meet your expectations during your stay. We hope in the future to do better.

Report response as inappropriateThank you. We appreciate your input.
This response is the subjective opinion of the management representative and not of TripAdvisor LLC
Michael W
Calgary, Canada
1
Reviewed October 20, 2018 via mobile
Very nice accommodation, Wifi is terrible

. As I come to Yellowknife for work contracts once or twice a year and have normally stayed at another hotel, I was very surprised at the quality of this hotel. The suites are nice and clean, insuite laundry is a great perk and the beds comfortable. For someone like myself who is away from family for weeks on end, the wifi is a terrible disappointment.Being assigned a suite at the end of the building, the wifi signal is pretty much non existent. I cannot consistently connect to do anything productive. Video chatting with my children is out of the question and checking and replying to email has to be done over my phone data package. Why is internet access in Yellowknife such a problem ?

Thanks for leaving your comments and your recognition of the wonderful condition that welcomed your stay.

Our guest Wi-Fi is receiving a over haul which would put that issue to rest, I am only sorry it was not completed sooner for you.

Report response as inappropriateThank you. We appreciate your input.
This response is the subjective opinion of the management representative and not of TripAdvisor LLC
View more reviews
PreviousNext
1…456…12