US$93
US$89
View deal
SAVE US$4
PricelineUS$93
Expedia.comUS$93
eDreamsUS$93
View all 14 deals
Prices are the average nightly price provided by our partners and may not include all taxes and fees. Taxes and fees that are shown are estimates only. Please see our partners for more details.
tinyislandteacher
2

This is our go-to place to stay in Charlottetown because of 3 main reasons:
1) Great pet policy! Our dogs love staying here
2) Newer hotel - very classy and clean
3) Beds are comfortable

We are very impressed with the level of care that the staff pay attention to. Rooms have lots of space (especially King suite) and very comparable to hotels in the downtown core. Close to a lot of amenities and a short drive to downtown.

Room tip: Higher floors facing the back of the building are quiet. The blackout curtains in rooms are *chef's kiss*
See all 75 reviews
Nearby Hotels 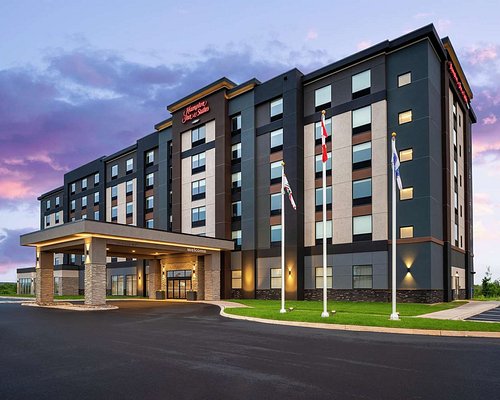 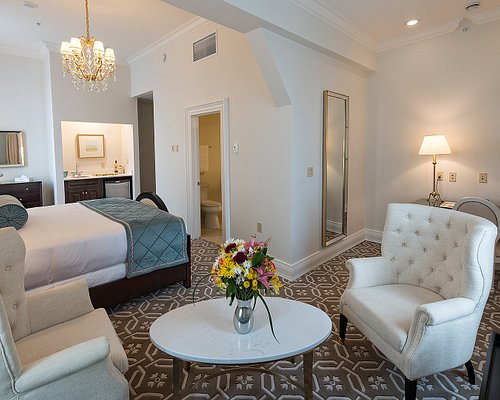 Taking safety measures
We compared the lowest prices from 17 websites
The Holman Grand Hotel
US$124
Booking.com
View deal
Free cancellation
Hotels.com
US$124
FindHotel
US$121
Priceline
US$124
View all 17 deals from US$121
589 reviews
4.3 km from Hampton Inn & Suites Charlottetown

Hotels.com
View deal
FindHotel
US$57
Expedia.com
US$57
Travelocity
US$57
View all 9 deals from US$57
166 reviews
3.9 km from Hampton Inn & Suites Charlottetown
We compared the lowest prices from 9 websites
Breakfast included
Fairholm National Historic Inn
US$165
US$123

Taking safety measures
We compared the lowest prices from 15 websites
Breakfast included
Comfort Inn
US$88
US$74
Booking.com
View deal
Reserve now, pay at stay
Hotels.com
US$82
Expedia.com
US$82
FindHotel
US$88
View all 16 deals from US$74
352 reviews
0.8 km from Hampton Inn & Suites Charlottetown

Our family with teen stayed over the Labour Day weekend.
The hotel appeared new, and maintained well. Free breakfast was still happening but in an easy take and go style. Staff gathered what you would like, from coffee to breakfast sandwiches and passed it out for you to sit or easily take to your room and eat.
The walls were definitely thin and although we have no complaints, I would hate to be there over a weekend with a large group of kids staying there.
Our room was not cleaned or tidied during our 2 night stay. I’m not sure if this was on purpose or accidental, but either way with the pandemic ongoing I was ok with no one entering our room during our stay and left it alone.
Good stay. Would recommend.

This review is the subjective opinion of a TripAdvisor member and not of TripAdvisor LLC
Coastcruising
Saint John, Canada
121
Reviewed September 10, 2020
Friendly Staff and nice clean hotel

This review is the subjective opinion of a TripAdvisor member and not of TripAdvisor LLC
690rolfb
236
Reviewed September 6, 2020
Brand new Hampton Inn with all amenities

A quick trip to PEI and stayed for 2 days at the Hampton Inn Express. All new hotel, maybe 1 year old, with all amenities and high standards of the Hampton Inn latest package. Very reasonable prices. Easy access via one of the main roads getting into Charlottetown. Maybe not right in the center of town, but easy to get in and out of town. Free parking is a bonus.
All good, any time again.

This review is the subjective opinion of a TripAdvisor member and not of TripAdvisor LLC
bwell8
Cold Lake, Canada
106
Reviewed August 23, 2020 via mobile
Lukewarm Experience

The Hampton Inn Charlottetown was our base for 3 nights as my boyfriend and I explored the Charlottetown area and the rest of the beautiful province of PEI. We were generally happy with our stay, but there were a few issues that somewhat tainted the experience.

First, let me begin with the good:
The hotel is very modern and clean. The room was spotless upon entry and was well-appointed with a king-sized bed, a walk-in shower, and plenty of electrical outlets/ charging stations. Very comfortable with a great aesthetic!

The not-so-good:
I got in the shower around 9 am on both Saturday and Sunday and was surprised by not having hot water. It’s wasn’t freezing, so I managed, but lukewarm showers on vacation are a bit disappointing. I’m surprised that this is an issue in a virtually brand-new hotel.

Breakfast is only served until 9, including on the weekend, which seems pretty early when on vacation mode. That’s not a huge complaint, though, as we could have made a point to go if it were one of the reasons for choosing this property, but it wasn’t a big deal for us to miss breakfast.

The sound proofing in the hotel was pretty awful. The doors slam shut behind you and we could hear the 4-5 doors in the vicinity of our room every time they closed. If people were talking in the hallway, we could hear just about every word they were saying from our bed. This might not have been super off-putting, but the hotel was hosting a few minor sports teams, with dozens of kids between 8-12 years old staying with their families. Don’t get me wrong, I’m a teacher and I adore kids, but they were excessively loud, and there were unaccompanied kids in hallways, elevators and other areas all of the time. I know as well as anyone that it’s hard to keep a large group of children entertained, but when they’re running the halls on their own, shouting to each other, or playing with mini hockey sticks in hallways (and I mean a full out games with teams and nets) and playing video games on the business computers morning to night, even at 11:30 pm, management should likely step-in and set some limitations. Not the fault of the hotel that there were teams, and I’ve travelled with many sports teams myself, but I was somewhat disappointed with the hotel’s lack of expectations regarding hotel behaviour.

Overall, I’d probably stay again when visiting Charlottetown, but this particular stay left a bit to be desired.

This review is the subjective opinion of a TripAdvisor member and not of TripAdvisor LLC
eblaidoir
1
Reviewed March 8, 2020
Very nice hotel, a bit loud

I enjoyed the hotel and the employees. Free popcorn in lobby and good breakfast. The rooms were clean and spacious. The bathroom was big and could accommodate easily two people getting ready. You could hear others through the walls and door. I would recommend this hotel for a trip. The times were quiet between 10pm and 6am.

Review collected in partnership with Hampton
This business uses tools provided by Tripadvisor (or one of its official Review Collection Partners) to encourage and collect guest reviews, including this one.
Ask eblaidoir about Hampton Inn & Suites Charlottetown
Thank eblaidoir