US$85
View deal
Free cancellation until 21-12-11
Reserve now, pay at stay
PricelineUS$85
eDreamsUS$86
FindHotelUS$85
View all 18 deals
Prices are the average nightly price provided by our partners and may not include all taxes and fees. Taxes and fees that are shown are estimates only. Please see our partners for more details.
Klindatheau1972
Merritt, Canada
3612

Got here and 1pm and told that check in time was at 3pm and my room wouldnt be ready until then. Did some erands and made it to the hotel by 3pm; and my room was still not ready. I did'nt get into my room until 3:40 pm. Parking is ok, but alot of backyard coasting to get to the parkade.

Well got to the room and liked a bit of what i saw. Room had a couch, mini fridge, Microwave and two double beds. Until i got to the TV and saw this old tv flat screen from the 2005's. I wanted to hook my Apple tv and Blu-ray DVD player; but no hdmi hook up ports. So in the last dozen hotels in the last two months... this hotel had the least compatiable TV'S.More 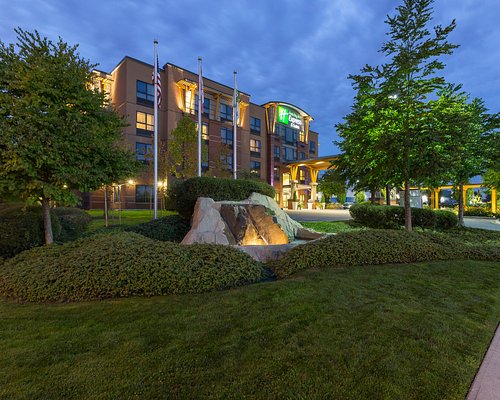 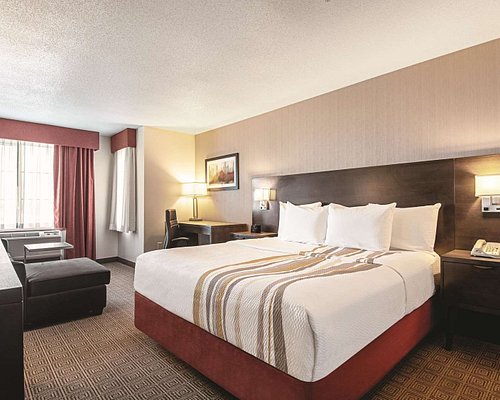 Orbitz.com
View deal
Booking.com
US$97
Traveluro
US$90
Priceline
US$96
View all 19 deals from US$90
1,469 reviews
6.8 km from Executive Hotel Vancouver Airport

good value for money even though rates keep going up! nice people at the front desk who are very helpful. my fifth stay with them and would use them again. check out is quick and easy and the shuttle runs on time.

This review is the subjective opinion of a Tripadvisor member and not of TripAdvisor LLC.
Janice L
1
Reviewed March 8, 2018
Great stay

I thoroughly enjoyed my stay at the Executive Airport Plaza Hotel. Friendly and helpful staff from the front desk to the shuttle driver! Great restaurant onsite and a liquor store. Huge roof top deck!

Review collected in partnership with this hotel
This business uses tools provided by Tripadvisor (or one of its official Review Collection Partners) to encourage and collect guest reviews, including this one.
Ask Janice L about Executive Hotel Vancouver Airport
Thank Janice L

This review is the subjective opinion of a Tripadvisor member and not of TripAdvisor LLC.
mjaywl
Vancouver, Canada
35
Reviewed March 7, 2018
Leaky sprinkler, unprofessional staff person

The sprinkler in my original room started leaking. Sometime in the middle of the night, we heard loud groaning and ticking above us. We thought it was just the normal water sounds of the hotel. However, the sprinkler started dripping right on the bed! I called the Front Desk who told me someone would be by within 15 minutes to check the leak and move us to another room.

The gentleman who came to move us was prompt and kind - however, he made some ignorant comments to us that I was appalled by. I believe he truly didn't know what he was saying was not OK. I believe he thought he was making small talk.

I was told that the hotel was booked completely the day before and had the sprinkler started leaking then I wouldn't be able to get a new room. According to him we were very lucky.

As an aside, he mentioned that because the hotel was so booked up "two Indian men had to sleep together in one bed" and that "two women had to share the same room" according to him, they didn't want to.

Regardless of people's belief systems, I believe it's not the hotel's business who and why people room together -- anyone can room together with whomever they want. Why race was something to highlight is another issue. I was asked if I knew "Mr. Low" - I'm not quite sure what this meant either but I can guess.

The reason I want to provide this information is because the amount of assumptions and discrimination in the short conversation we had was astounding and made me feel uncomfortable. I feel that diversity awareness training will be good for the hotel staff especially since it's in the hospitality sector. Staff will work with and meet many different people.

I was at the hotel for a business meeting my company hosted. We often host meetings at this hotel location due to proximity to the airport. We've had very good service thus far. Nonetheless, would I want to subject my guests to this behaviour and service? No. I do want to note that the catering/banquet, front desk, a/v staff working at the meeting were great. I want it known that the other staff I encountered were great.

To comment on the hotel's response: I did make a review on their wifi survey. I was contact very quickly to discuss the issue. However, I was working at the meeting and asked to be contacted by phone the next day. I didn't receive a phone call. I followed up on Monday and still have not heard back from the hotel.

This review is the subjective opinion of a Tripadvisor member and not of TripAdvisor LLC.
Connie H
fort st john
12
Reviewed March 6, 2018
Vacation 2018

Always count on the hotel to be clean and very accommodating staff. The best place to stay!!! Look forward to next week when we are back again. The front desk staff and Laura are the best. They are efficient and so kind.

Review collected in partnership with this hotel
This business uses tools provided by Tripadvisor (or one of its official Review Collection Partners) to encourage and collect guest reviews, including this one.
Ask Connie H about Executive Hotel Vancouver Airport
Thank Connie H

This review is the subjective opinion of a Tripadvisor member and not of TripAdvisor LLC.
aliddo
Vancouver Island, Canada
184
Reviewed March 4, 2018
A little tired, but functional

The location of this hotel is good, just minutes from the airport, shopping and skytrain. On the downside, the room was in need of some updating and a good clean. The heater was caked in dust and there were dead ladybugs on the window sill. Given the cold weather, those bugs had been there for some time. Was there for a conference so only ate the catered food, which was reasonable, but not inspired.

This review is the subjective opinion of a Tripadvisor member and not of TripAdvisor LLC.
View more reviews
PreviousNext
1…484950…