US$104
US$90
View deal
SAVE US$14
Free cancellation until 21-04-30
PricelineUS$104
eDreamsUS$104
FindHotelUS$90
View all 15 deals
Prices are the average nightly price provided by our partners and may not include all taxes and fees. Taxes and fees that are shown are estimates only. Please see our partners for more details.
67um
Toronto, Canada
8816

Good size rooms. Location is very convenient if you are planning to do snow tubing. It’s newly renovated hotel. Outdoor hot tub looked good, unfortunately we didn’t have time to use that. We had no microwave in our room that was a only complaint we had.

Trip type: Travelled with family
See all 89 reviews
Nearby Hotels 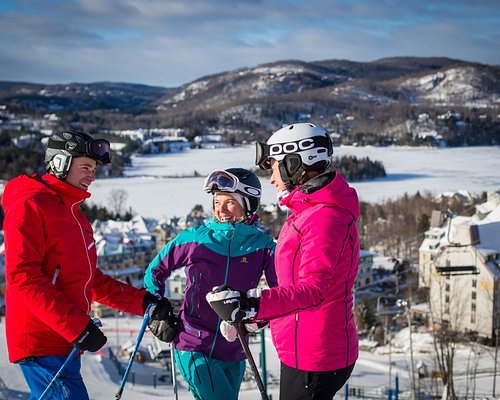 Expedia.com
View deal
Pay up to 12X
Booking.com
US$108
FindHotel
US$102
Lol.travel
US$151
View all 18 deals from US$102
416 reviews
10.7 km from AX Hotel
We compared the lowest prices from 18 websites
Breakfast included
Sponsored
Holiday Inn Express & Suites Tremblant
US$128

Taking safety measures
Tour des Voyageurs
US$108
Booking.com
View deal
Expedia.com
US$107
Hotels.com
US$107
StayForLong
US$157
View all 17 deals from US$106
586 reviews
10.5 km from AX Hotel
We compared the lowest prices from 17 websites
Breakfast included
Microtel Inn and Suites by Wyndham Mont Tremblant
US$74

Wyndham
View deal
Booking.com
US$74
Hotels.com
US$73
FindHotel
US$88
View all 18 deals from US$73
106 reviews
2.8 km from AX Hotel
We compared the lowest prices from 18 websites
Cap Tremblant Mountain Resort
US$100

I booked a stay with my friends 3 weeks in advance . The same day , they started installing roadblocks for our way there and the city had just become a red zone (meaning cases have gone up extremely in the area). We called the hotel to waive the fees because we physically could not get there , as we would each get 6000$ fines and/or be asked to turn back around . The manager has no compassion or understanding for our situation , and when we tried calling again , she sent us to voicemail. Even Booking.com(the app I booked through) called them and tried reasoning with her and she didn’t bother even letting us change dates or at least give us back a percentage of the reservation cost we paid. I should have read all these reviews first because it is very clear they have extremely poor customer service and care very little for their clients. Don’t book here.

This review is the subjective opinion of a TripAdvisor member and not of TripAdvisor LLC
raquelakl
11
Reviewed September 29, 2020
Save yourself the headache and don't book at this hotel

Terrible customer service! I did not even get to the hotel facilities and they left a sour taste in my mouth. I had booked a package (massage and spa at the Scandinave spa + one night stay at the hotel) in July 2020, making sure with the hotel and the spa that there were availabilities for the dates I wanted. Once the stay was booked with the hotel, I had to book the massages at the spa through the hotel (although the spa and the hotel are two different establishment). Not a problem, I told the hotel the date I wanted my massage (having previously checked availability on the spa website to make sure there were appointments on that date). They told me they would call the spa make the reservation and call me back that evening. I never got a call back. The next day I called them (thinking they had booked the massages but forgot to call me and confirm everything), they hadn’t called the spa to book the massages. It had slipped through the cracks and no one was ever going to call the spa and make the reservations. They called the spa more than a day after I had called them asking to make the appointment and, sure enough, there were no more massage appointments at the spa anymore. They told me to come to the hotel anyway, and not have the massages, even though I had paid extra (approx. 300$ more) for the massages and access to the baths. I cancelled the reservation and was put in contact with someone who could help me resolve the issue. The manager proceeded to tell me they could not reimburse me (even though the package was bought through their website). The problem was on their part (forgot to book the massages when I had called), and they would not reimburse me. Finally, the manager said she would speak to the accountant and get back to me, and told me to contest the transaction through my bank because it would be the only way I would get my money back for now. The manager never called me back. I contested the transaction through my bank. The hotel refused my contestation through the bank (even though they were the ones to tell me to do it that way) and do not want to give me my money back.

Save yourself the headache and do not book anything with this company. They have no respect for their customers.

This review is the subjective opinion of a TripAdvisor member and not of TripAdvisor LLC
temi613
Ottawa, Canada
8167
Reviewed August 22, 2020 via mobile
Very nice and comfy.

The hotel is very well situated , in the mountain , very quiet but 2minutes from the Main Street and restaurants. Took a special , 2 nights and dinner at the Grill. When I booked ,I was told that we could bring our own wine, by Nancy but not the case because they now have there liquor license. But the food on the BBQ was delicious! The cooks were very good. Really enjoyed our stay. We also hade a free beverage at the bar.
Overhaul very good , will go back.

This review is the subjective opinion of a TripAdvisor member and not of TripAdvisor LLC
cintia2308
Playa del Carmen, Mexico
91
Reviewed July 5, 2020
Dirty room in covid times

The location is good not really far away from the touristic area, the service have to get better honestly (really disappointed), people sees you trying to ask something and they pretend you are invisible ( restaurant and front desk). Unfortunately in COVID times we got a a greasy room, the main wall was dirty with some oily handprints on the wall and the staff just called the housekeeping to clean the area, no appollogies, no room move, no nothing.

This review is the subjective opinion of a TripAdvisor member and not of TripAdvisor LLC
Manuelb31
Barcelona, Spain
33
Reviewed March 14, 2020 via mobile
my wife has coronavirus and they refuse to cancel

I had a reservation for this hotel from April 8-10. My country has prohibited us from leaving Spain and my wife is very ill due to the coronavirus.

I have written to the hotel so that, due to all this, they would cancel the reservation at no cost, since my wife is very very ill and we will not be able to go or travel for a long time.

The unfortunate response of the hotel, after explaining my story is that it will not return the money of my reservation. I do not see it as normal, as it is a case of force majeure.