US$111
US$103
View deal
Priceline
Booking.comUS$103
HiltonUS$111
View all 17 deals
Prices are the average nightly price provided by our partners and may not include all taxes and fees. Taxes and fees that are shown are estimates only. Please see our partners for more details.
David B
Glasgow, Scotland, United Kingdom
1

Stayed for 2 nights for a work trip. Handy location and staff were nice enough. Did have to go down to bar to order room service though due to staff shortages and a number of items were out of stock on the menu.
Staff on second night were much more welcoming and made for a more pleasant stay.
Mugs in room were dirty though with tea stains and looked as though hadn’t been cleaned which is concerning in the current climate.
I would stay again for ease of location but not the best Hilton experience I’ve had.More

Show less
Room tip: It is in a handy location, not far off the motorway but isn’t the best Hilton I’ve stayed at.
Trip type: Travelled on business

Thank you for your TripAdvisor review regarding your stay at Hilton Leicester. I am sorry to see you have a couple of issues, we are sorry for this. We are glad to see though that the team looked after and made your stay pleasant. Thank you again and we hope to welcome you back next time you are in Leicester.
Kind Regards

Report response as inappropriateThank you. We appreciate your input.
This response is the subjective opinion of the management representative and not of TripAdvisor LLC
See all 1,961 reviews
Nearby Hotels 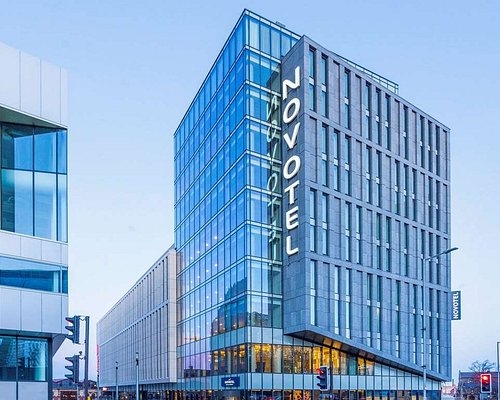 Leicester Marriott Hotel
US$126
Tripadvisor
View deal
Pay up to 12X
Expedia.com
Hotels.com
Marriott Hotels
US$127
View all 18 deals from US$126
1,339 reviews
0.4 km from Hilton Leicester Expedia.com
View deal
Hotels.com
Booking.com
US$89
Agoda.com
US$95
View all 6 deals from US$89
11 reviews
4.9 km from Hilton Leicester
We compared the lowest prices from 6 websites
Premier Inn Leicester (Braunstone) hotel

We stayed at the hotel as part of a Stay, Play Explore break.

We got a very warm welcome and nothing was too much trouble.

I’d recommend getting a room at the back of the hotel if you’re a light sleeper as there is a lot of road noise, but the rooms were clean and spacious.

We used the pool in the morning and the kids loved it.

Review collected in partnership with Hilton Hotels & Resorts
This business uses tools provided by Tripadvisor (or one of its official Review Collection Partners) to encourage and collect guest reviews, including this one.
Ask Nlax09 about Hilton Leicester
Thank Nlax09

Thank you for your TripAdvisor review regarding your stay at Hilton Leicester. It is great to see you you received a warm welcome and the team looked after you during your stay. Thank you again and we look forward to welcoming you back again soon.

Report response as inappropriateThank you. We appreciate your input.
This response is the subjective opinion of the management representative and not of TripAdvisor LLC
Discover51550563371
1
Reviewed August 28, 2021 via mobile
Customer service fail

I have stayed at the Hilton many times as a business traveller and generally the hotel is fine. On this occasion, I forgot my charger in the room and phoned the hotel to see if they had found it. I was told that the lost and found office was busy and would call me back. After trying for 3 days, I have given up. It is not the fact that I lost a low value item, it is the principal that the hotel did not care about me as a customer and at least attempted to locate the charger and respond to my call. I wont be staying here again.

Thank you for taking the time to share your opinion on Trip Advisor after your recent stay. I was sorry to hear that your expectations were not fully met on this occasion and apologies for the disappointment this has caused. Your feedback has been shared with the management team so that we may learn from your experience moving forward. Thank you again for your comments. I hope we will have the opportunity to welcome you back to our property in the near future.

Report response as inappropriateThank you. We appreciate your input.
This response is the subjective opinion of the management representative and not of TripAdvisor LLC
MemphisLizzy
Memphis
1818
Reviewed August 19, 2021
2 Nights Business Stay

Front desk staff were helpful. Room was clean. Decor needs updating. I usually stay at Hilton properties in the US. So I expected similar standard at this hotel. This hotel would benefit from corporate help improve food, restaurant service, soundproofing hallways, decor, and the state of it's grounds.

Report response as inappropriateThank you. We appreciate your input.
This response is the subjective opinion of the management representative and not of TripAdvisor LLC
Dumbira
32
Reviewed August 13, 2021
Good hotel

We stayed in this hotel to break the long journey back gone after holidaying in Lancashire, we wanted a hotel with pool for the kids to have something to do. The check ins and check outs were quick and easy, great breakfast lots of choices to eat, hot or cold and the guy at the bar was friendly and they have good range of drinks, small but good, there is a coffee area but this is not open to serve guest all the time. Theriomorphic were cleaned and basic, good tv size, desk and a sofa. The bathroom was cleaned but keep in mind that yoga building is very old and it shows as soon as you walk in the corridors to go to your room, especially in the bathroom, it could do with some re-vamp. Didn’t have a good sleep as there was too much noise coming from the corridors, but I guess that was down to guests being careless. The pool was a good size, but as everywhere else you have to make sure you book your hour slot quick as they go ver fast. There is a gym, steam room and a sauna ( the sauna was not working). A good hotel for a few nights.

Review collected in partnership with Hilton Hotels & Resorts
This business uses tools provided by Tripadvisor (or one of its official Review Collection Partners) to encourage and collect guest reviews, including this one.
Ask Dumbira about Hilton Leicester
Thank Dumbira

Thank you for your review regarding your recent stay at Hilton Leicester. It is great t see you enjoyed your stay but I am sorry to see you had noise issues during the night. We thank you again and we hope to welcome you back next time you are in Leicester.

Report response as inappropriateThank you. We appreciate your input.
This response is the subjective opinion of the management representative and not of TripAdvisor LLC
hanifb123
Preston, United Kingdom
41
Reviewed August 9, 2021 via mobile
Two Queen (Deluxe) Rooms booked for two nights

We visited Leicester to meet family and friends. I booked two Queen deluxe double rooms - one for my family (2Ad 2Ch) and another room for my two other siblings.
We were greeted by an excellent staff member who made us all feel very welcome and directed us to our rooms. The checkout undertaken by Ashley was fantastic and took on board all our complaints and took action for the times we experienced poor service.
We asked for some slippers and we’re told that the room we had booked were not a deluxe. The second room booked separately by my sibling was also booked as a deluxe but apparently theirs was also not a deluxe room.
The issues faced in this hotel included non-existent room service which was surprising for a 4 star Hilton, the beds and pillows were comfortable but the room itself was very old but reasonably clean, the bathrooms are seriously a two star standard although everything still works, the size is really small and the design doesn’t really work well. Overall we appreciate this hotel is quite old and we can’t really compare to the Hilton Metropole in London, we’ve never felt we were looking forward to being home again after having stayed in other 4 and 5 star hotels.
On the first day we wanted a hot drink in the reception area. So we looked around to see where we could purchase a coffee. We were told to go to the coffee shop pod which was unmanned. We went to the bar where there was understandably plentiful alcohol. We asked the two waiters where we can purchase coffee and they advised they can make us a hot drink. When we asked for a menu, one of them regurgitated a mental list of different hot drinks - I picked up on one drink and oddly they didn’t have a written drinks menu, so two drinks were apprehensively ordered. The next question we asked was if they had any biscuits or cakes with the hot drinks. One of the two clown waiters then said yes, and the other clown said no, so we just told them to cancel the drinks and we’ll walk to McDonald’s to buy the drinks! Upon leaving the hotel for the drinks, we noticed both the clowns arguing amongst themselves about why the other had offered a biscuit when there was no biscuit. This was a highly bizarre and uncomfortable situation for us.

No fridge was in the room and this caused us to struggle as we needed somewhere to put water and insulin. If we realised there was no fridge then we would have visited the Marriott instead.

The breakfast was good.

The room cleans were to a good standard.

The parking was very convenient and reasonably priced.

The pool was nicely staffed and clean. There were plenty of towels and toiletries.

Overall having spoken to Ashley at the end of our stay, and having received some recompense, I think the overall experience was ok, it wasn’t bad and the hotel could really do with making some proactive improvements to both the staff service and the hotel itself. It should not call itself a 4 star hotel as that is what a customer would expect - if this was called a 3-star hotel and priced accordingly, then we wouldn’t have complained.

Thank you for your review, we really appreciate the time you have taken to share your experience. I was sorry to hear that your expectations were not fully met on this occasion and apologies for the disappointment this caused. Your feedback has been shared with our management team so that we may learn from your experience. Thank you again for your feedback.

Report response as inappropriateThank you. We appreciate your input.
This response is the subjective opinion of the management representative and not of TripAdvisor LLC
View more reviews
PreviousNext
1234…