US$79
US$72
View deal
Free cancellation until 21-08-05
CheapTicketsUS$72
Orbitz.comUS$72
getaroom.comUS$79
View all 16 deals
Prices are the average nightly price provided by our partners and may not include all taxes and fees. Taxes and fees that are shown are estimates only. Please see our partners for more details.
BackPacker829192
Ghent, Belgium
2

Good situation : close to the Lac and close to public transport

Good situation : it is situated in a quiet area (close to the Lac) and well placed for a visit to Bordeaux : there is a direct tramway next to the hotel going to the city center. The rooms in the hotel are clean and pretty large.

Review collected in partnership with Accorhotels.com
This business uses tools provided by Tripadvisor (or one of its official Review Collection Partners) to encourage and collect guest reviews, including this one.
See all 1,172 reviews
Nearby Hotels 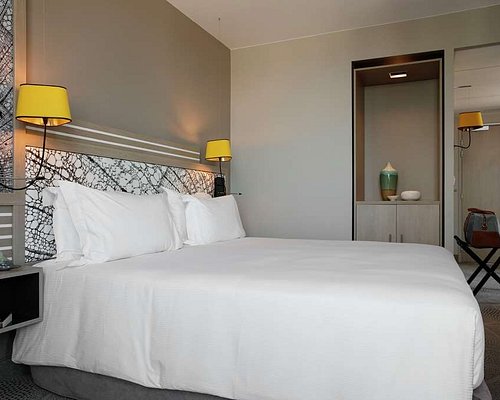 Expedia.com
View deal
Hotels.com
ZenHotels.com
US$78
Booking.com
US$85
View all 15 deals from US$78
2,545 reviews
6.1 km from ibis Bordeaux Lac Hotel
We compared the lowest prices from 15 websites
Zenitude Hotel-Residences Begles

I have visited this hotel several times when driving to and from Spain. They have a large turnover of staff, however they have always been friendly. Unfortunately the restaurant isn't great & expensive, I've had anything from cold food served to wrong orders, even though I've ordered in French, I have to unfortunately report that the staff in the restaurant don't appear bothered when it comes to customer service or satisfaction. However the hotel itself is good, so as long as you eat elsewhere it is nice hotel

Dear Sharon A.
Thank you for taking the time to tell us about your experience at the ibis Bordeaux Lac. I am sorry that your experience did not meet your expectations; please allow me to express my sincerest apologies.

At Ibis, we strive to provide a superior service experience for every customer; therefore your feedback is very important to us. Please rest assured that we are taking the appropriate measures to address the problem and prevent future occurrence.

We appreciate your sharing your concerns, and it is our hope that you will give us the opportunity to better serve you in the near future.

Report response as inappropriateThank you. We appreciate your input.
This response is the subjective opinion of the management representative and not of TripAdvisor LLC
JandBonhols
Wigan, United Kingdom
6120
Reviewed December 2, 2019
Basic, clean, in a good location with helpful staff

This review is the subjective opinion of a TripAdvisor member and not of TripAdvisor LLC
421Traveler_123
Brooklyn, New York
332146
Reviewed October 18, 2019
Typical Ibis Value: Clean, Affordable and with Breakfast

Ibis Bordeaux Lac offered the kind of good service, clean rooms and solid breakfast for a competitive fare you can usually get from Ibis. This hotel is linked to Bordeaux by public transportation and has a secure and free parking lot. This is a great option for those driving to Bordeaux who prefer to avoid the downtown area. However, as with all Ibis, you should expect simple rooms and limited amenities.

This review is the subjective opinion of a TripAdvisor member and not of TripAdvisor LLC
Alison C
Vera, Spain
914
Reviewed August 31, 2019 via mobile
Not worth the money

I was driving through France to Spain with my dog who is not a great traveller, so stress levels were quite high. I had downloaded the Accor hotel app so I could use this to find accommodation near to where I was. The app does not allow you to book a hotel room with a dog so I had to call. The receptionist was helpful and took my booking. I couldn't fi d my credit card so she told me she would hold the room for 50 minutes and I should call if I was going to be later. I did think maybe late so I pulled I to a service area and called. I was told it was a bad line and she could not hear me, she then just hung up, no attempt to call me back and I knew from my last conversation with then that they had caller display. The room cost about £110 and another €10 for breakfast. The room was nothing special, very basic and certainly not worth the money. I ate in their restaurant and ordered a burger, the burger was tasty but was tiny and certainly not worth the money. Breakfast was good though, more than enough variety but quite busy so a bit if a queue. I would have booked into the IBIS budget over the road if the app and website had the correct phone number. It would have been £50 cheaper and from what I could see from the app, offered the same as its sister hotel without the restaurant, but there are restaurants around ai it would have been fine.

This review is the subjective opinion of a TripAdvisor member and not of TripAdvisor LLC
OnAir788502
Antwerp, Belgium
616
Reviewed August 9, 2019
Great value!

We stayed here on our drive to and back from Andalusia. It's still Ibis so don't expect anything fancy, but we found this a great place to spend the night. Friendly staff, handy location (you're right back on track), no noise at night, room was spotless and spatious, bed was absolutely great. We didn't try the restaurant or have breakfast in the morning but it looked fine as far as we could see. There are a couple of other restaurants close-by.