US$91
US$80
View deal
SAVE US$11
PricelineUS$86
Hotels.comUS$86
StayForLongUS$91
View all 15 deals
Prices are the average nightly price provided by our partners and may not include all taxes and fees. Taxes and fees that are shown are estimates only. Please see our partners for more details.
Annemarie9051
Stiens, The Netherlands
1

A great night in a great homely hotel

Great hotel. With great personel. Flexibele and homely. Great interior. Verry good breakfast with everything present. We were on our way back from the airport going home. Great stop. Near the higway and private parking. No sticker needed.More

Show less
Room tip: Not so hot.
Review collected in partnership with Meliá Hotels International
This business uses tools provided by Tripadvisor (or one of its official Review Collection Partners) to encourage and collect guest reviews, including this one.

thank you very much for your feedback.
We are pleased to read, that you´ve had a good stay with us.

We hope to see you soon!

Report response as inappropriateThank you. We appreciate your input.
This response is the subjective opinion of the management representative and not of TripAdvisor LLC
See all 299 reviews
Nearby Hotels 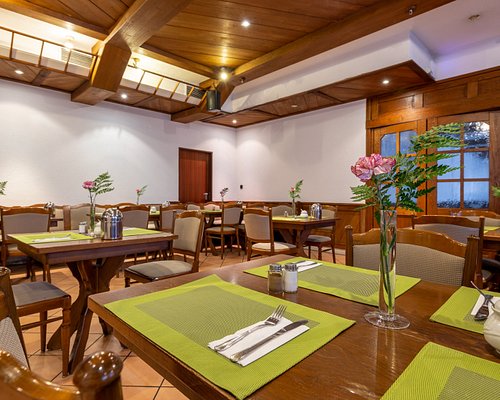 Expedia.com
View deal
Pay up to 12X
Booking.com
US$71
Agoda.com
US$62
StayForLong
US$75
View all 15 deals from US$62
7 reviews
4.1 km from Hotel Dusseldorf Krefeld affiliated by Melia
We compared the lowest prices from 15 websites 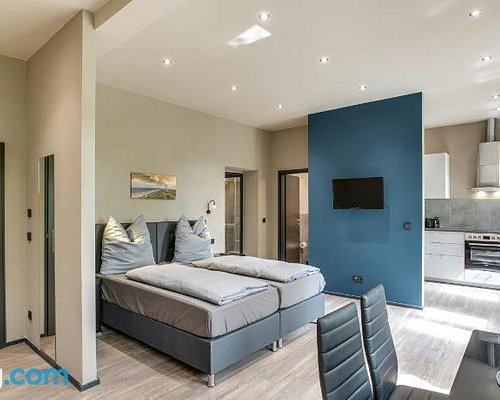 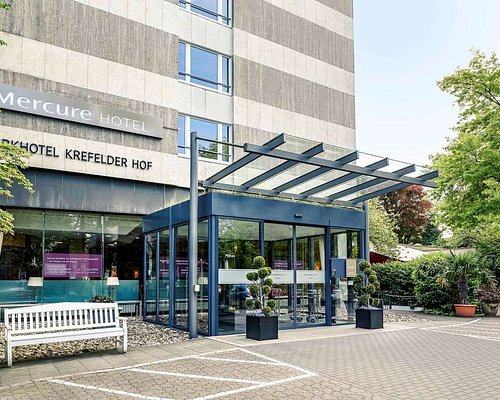 Top Rated
Mercure Parkhotel Krefelder Hof
US$138
US$123
Booking.com
View deal
Free cancellation
Expedia.com
US$122
Priceline
US$122
StayForLong
US$138
View all 18 deals from US$122
436 reviews
5.3 km from Hotel Dusseldorf Krefeld affiliated by Melia

I booked two rooms in the hotel for a family visit. The rooms are modern and clean. Beds are a bit harder than I want but acceptable. Breakfast offered variety and the service was good. The hotel is in the middle of a modern business park so not much charm. Forstwald is very near by where the walking is very good.

This review is the subjective opinion of a TripAdvisor member and not of TripAdvisor LLC
V951PFdavidp
Taunton, United Kingdom
242132
Reviewed November 20, 2019 via mobile
Excellent modern hotel

Stayed here for one night when visiting the Messe Düsseldorf. It was a little far out, but hotels nearby are ridiculously expensive.
The bed was ok, a little hard, but other than that the hotel was excellent, very clean and well equipped.
The breakfast was amongst the best I have had in mainland Europe. I was really impressed.
I arrived late and did not require an evening meal, but I expect this would have been difficult to source outside of the hotel as there did not appear to be much around.
Uber from the airport was just over €40. Uber will not however collect you in the morning, it’s too far out. A taxi took 15 minutes to come and then €38 to the Messe.
If I visit the Messe again, I would have no hesitation staying here.

thank you very much for your feedback!

We hope to welcome you again in the future if the fair starts again.

Report response as inappropriateThank you. We appreciate your input.
This response is the subjective opinion of the management representative and not of TripAdvisor LLC
sl2021
london
258136
Reviewed November 13, 2019 via mobile
Basic and not somewhere I would choose

I spent 2 nights here after being warned by a colleague it wasn’t great. On arrival I thought the communal area looked nice.

Bedroom was ok & bathroom - bed wasn’t great and pillows awful. There was a lot of noise with the window open and despite it being November the room was really hot.

Had a kettle in the room but no spoons or creamer/ milk.

Asked for an iron on arrival never materialised so had to call the next morning.

Came back day 1 to find the cups not washed.

The noise of the person next door could be heard.

No facilities here as based on an industrial estate. Nearest location to my meetings but probably wouldn’t choose again.

Overall disappointing I think with some tweaks they could jnproge this

thank you very much for your detailed feedback.
We are really sorry to read, that we didn´t meet your expectations.

We moved all the above mentioned Points forward to the departments of our hotel.

All the best,
Hotel DKR

Report response as inappropriateThank you. We appreciate your input.
This response is the subjective opinion of the management representative and not of TripAdvisor LLC
AndyM290670
Crowthorne, United Kingdom
92125
Reviewed October 24, 2019
Disappointing

We booked four rooms for the duration of the K Fair at the Messe Dusseldorf during October 2019. Having stayed here for the same reason on a couple of other occasions (every 3 years). The hotel used to be the Tryp Dusseldorf Krefeld.

Location to the Messe is excellent - being just 10 miles away which took approximately 15 to 20 minutes in the morning depending on traffic.

Check in and check out was good. It was nice also to see the same employees working in the bars and restaurant. In fact the staff are very good - however, the reception could have been a little more helpful - especially bearing in mind instead of the standard rate, we paid EUR 259.00 per night due to demand caused by the exhibition at the Messe.

Parking had to be paid on top of this.......just another way to take your money but most definitely should be included.

There were some decorating works going on which started at around 8am. Could these not have been scheduled at a later time when the hotel was less full! This was on one floor and carpet had been covered to prevent paint getting onto it. It didnt look great.

We had basic rooms, which were very basic but manageable. Lighting in the room is terrible which made it difficult to work. WIFI is just appalling. Very difficult to work remotely and certainly no Netflix streaming!!! I even asked and was told the signal strength was not good enough. In this age, i am sorry but this is just not good enough. I asked for an iron and ironing board and had to take it my room myself. Could they not have had it brought up. Very old ironing board but the iron was okay. One of my colleagues had asked for an iron and ironing board and was told they had run out. Sorry, but this is not acceptable. You know you will be full with business guests and at the highly inflated price we paid, I would have expected someone to have gone to the local shop and bought more!!!!!

In one of our rooms the television did not work.

As we stayed in a basic room we had no water provided - despite paying EUR 259 per room per night. Management need their head screwing on - what would it cost to provide a free bottle of water.....and not just for the next level room which also looks pretty basic. Especially at these rates....come on!

The hotel did not have functioning air conditioning, despite this being advertised as part of the room. On complaining, as it was unbearable during the night, we were provided with fans but told the in room air conditioning only works when it is over 18C outside.......unbelievable, especially when you advertise it as being included. We did complain but no action was taken, just - after day 3 - the suggestion of a fan. The manager did not make any special efforts to speak with us.

The bathroom is okay and the shower is very nice and powerful.

As previously mentioned the bar man and the restaurant staff are all excellent. Food is good but the menu is very limited. Breakfast is also fairly good although the scrambled eggs started by being the best I had ever eaten to at the end of 8 days, being something I would have thrown in the dustbin at home and started again!!!!

In summary, we would only stay here again if we absolutely had to. Demand at these big exhibitions at the Messe Dusseldorf make it difficult to find hotels which are relatively near by and this would be the only reason for staying here again. It is necessary to take a taxi if you want to eat out.

All in all a disappointing stay and we will be looking elsewhere for next time. In fact, this stay has also put me off staying in Melia hotels so a little unfortunate for them.

This review is the subjective opinion of a TripAdvisor member and not of TripAdvisor LLC
Tan N
82
Reviewed October 17, 2019
Disappointing

The hotel was clean and communal areas were clean, airy and well kept. Breakfast was excellent and offered a fair rate for what is on offer ( €16)
The room was small and very hot with no air conditioning. No in room facilities were offered despite being offered an upgrade....
The restaurant closed most evenings while we were there which seemed madness as we were a coach party and no other restaurants are in the vicinity. We had to ask our coach driver to take us or use public transport or taxis.
On 2 evenings they offered bar food however only one member of staff to cover the kitchen and the bar is ridiculous. Waiting over an hour to be served a drink as the bar staff was cooking!
Security was breached and paying guests were put at risk when hotel staff gave out personal information about their guests to non residents. These non residents then entered the hotel which had the potential to turn nasty

we would like to thank you for your detailed feedback.
We are very worried about the mentioned facts you´ve just told us.
The points are absolute not our standard and we would like to warmly apologize for the above mentioned points.
We moved the feedback forward to the F&B department for a further discussion.
In fact we´ve been renovated at March 2020. All the rooms do have an AC and more to offer such as snacks, water and bathrobes.

We would like to mention though, that we do not send our or hand out any personal information to non residents.
Because of that, we would like to get in touch with you.
Please be so kind and email us to hotel.d.kr@melia.com the information and the exact situation please.


We still hope to welcome you again at our Hotel and please stay safe!

Report response as inappropriateThank you. We appreciate your input.
This response is the subjective opinion of the management representative and not of TripAdvisor LLC
View more reviews
PreviousNext
12…50