Dein Engel
Lock in the lowest price from these sites

Expedia.com
Hotels.com
eDreams
View all 14 deals
Prices are the average nightly price provided by our partners and may not include all taxes and fees. Taxes and fees that are shown are estimates only. Please see our partners for more details.
Windhund
Yorkshire, United Kingdom
232161

This trip had been booked for a long time, we were a group of golfers on an annual weekend.

First up, if your main concern is Coronavirus, then look no further, we were very concerned but felt safe in this hotel. The staff all wore masks and masks are obligatory in public areas for all guests. You may only remove them when seated in the restaurant.

One of our concerns was regarding buffet service, the hotel policy did put our mind at rest, gloves were issued for serving purposes and perpex screens were abundant.
The food was excellent, absolutely no complaints, and, it is Bavaria, so plenty of it too.

We did not use the wellness area so cannot comment.

As for the attached golf course, alpine style, so expect a lot of hills. It is not a long course, plenty of par 3s, but still costs over €70 a round, which I feel is rather expensive. If you need a cart, add another €40. We had lousy weather, so in fact only managed one round of golf which was a shame because we had a free round per day included in the room price.
The rooms were lovely and clean, wifi was very good, no issues there with plenty of parking space.
To summarise, I would definitely recommend this family run hotel with the friendliest of staff.More 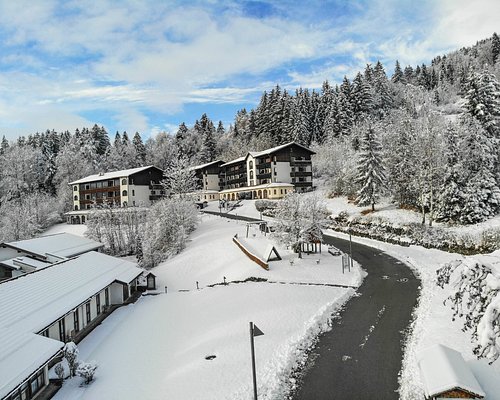 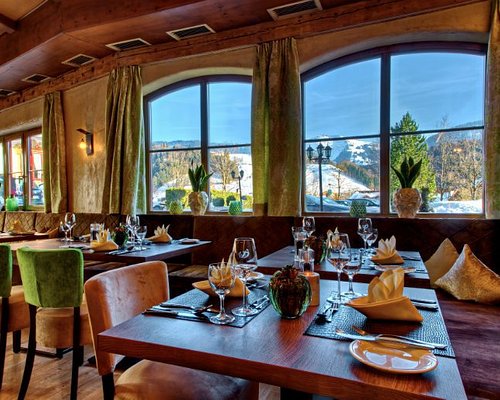 Breakfast included
Koenigshof Hotel-Resort Oberstaufen
US$153
US$142
Booking.com
View deal
Hotels.com
US$142
Priceline
US$142
Trip.com
US$153
View all 14 deals from US$142
213 reviews
2.5 km from Dein Engel
We compared the lowest prices from 14 websites
Breakfast included
Hotel Adler
US$198

We stayed at hotel Dein Engel Oberstaufen for four nights in November. Below the line, we are disappointed although we did not expect a particular hotel in Southern Germany. We only wanted to spend some lovely days in a cosy hotel, enjoying wellness & sport and relax by doing little during the day.

Location, about 1.3 miles from Oberstaufen station, was ok. Because, it would be difficult to walk with luggage, the hotel offers a shuttle which was waiting already and brings you to the hotel. For days without luggage and if you do not want to hire bikes, there is a bus very close by. So a car is not even needed.

Lobby is ok, mainstream. Reception is friendly and check-in quick. Our room was old style and partly renovated and now has a design which in our opinion shall fit well to best-agers older than 55 or 60 years. A bit old-fashioned, but definitely well maintained, spotlessly clean (in fact the cleaninest room ever even on in the corners). Bathroom in late 90ties design, but again all working, no sign of heavy usage (or damage).

Wellness area was a big disappointment. It appears to be more than 10 years old, maybe from turn of millennium. It once upon a time was built with apparently a high demand on variation of (local) sauna types, Kneipp water treatment, showers and relaxing areas as well as whirlpool and two more than swimming pools. However, all now is outdated, heavily used and shows signs of age, but of (black) mould, dirt in the corners, rust at the ceiling, old wood in the sauna, cracked wall/ ceiling painting. We could not relax much, also because we could not avoid to listen to conversations of other guests because of some „echo“ from a bit far away sitting areas. A reconstruction must be difficult, but to be honest, we have chosen the wrong hotel and would prefer a lower number and less variation of sauna, but with a modernised design, also showers which are cleaned and the whole area of rooms showing a clearer layout and higher functionality.

Be aware that sauna is switched on automatically by timer (no change of start time possible) at 3 pm. This does not match to the positioning of a „Wellness & Sport“-Hotel and was even more disappointing on a late October/early November day when it was heavily raining all day. Guest were sitting around or wasted their time in the pool area waiting for sauna to get started.

The most embarrassing and annoying, no one at reception told us that we - although we stayed at the "old" part of the hotel, can use the sauna of the "suites" =premium part of the hotel. This sauna is several months old. We found ourselves, but were locked one evening when we returned to the other part of the hotel 10 minutes past eight. Sauna was still set to summer time and therefore reduced temperature an hour before closure (already 7 p.m.!). We had to pass through entirely dark floors and had to call the bar (reception leaves around 8 p.m.) to open doors again.

Breakfast is ok, again mainstream, no much change. During two succeeding bank holidays we have eaten the cheese from day 1 on day 3. No new, no other food. Breakfast system is like we know from former Eastern Germany when you were placed at a fixed table to avoid to meet people from West/ East Germany. We changed table though to sit in at the window, because we went very early and no one was sitting there. Service was not happy to do so, because they allocated this table to a couple coming for late breakfast and did not want to clean the table in between. Winter garden is nothing special, but nice and clean to sit there. Just change table and ignore this stupid system.

We know that now you believe we are talking down the hotel, but the following is the worst we ever had and happened to us in the second night. At 04:54 am, service "entered" our room (despite locked door!), waking us up loudly and offering us a "Schroth Kur" which we never ordered. We threw out of our room...and left a day earlier. The hotel wanted to charge us for all nights, and later very "generously" offered to cancel the cost for the last night. When we paid we realised that they for the reduction of nights increased the price for the remaining nights. No comments...Try to find another hotel, not recommended.