Giordano and his children are very personable. Giordano is very accomodating and helpful. - Review of Hotelito Oasi Italiana

US$41
View Deal
TripadvisorUS$41
Snaptravel
ZenHotels.com
View all 7 deals
Prices are the average nightly price provided by our partners and may not include all taxes and fees. Taxes and fees that are shown are estimates only. Please see our partners for more details.
verificaz
Plantation, Florida
121

Giordano and his children are very personable. Giordano is very accomodating and helpful.

This country hotel is managed and operated by its owner Giordano. Its located on a montainside, away from the noise and traffic with a vierw of the Caribbean Sea. Giordano is Italian and personally attends its guests. His pasta dishes are very good and tries to obtain fresh fish and local produce daily.
The hotel is geared to those who enjoy "the road less traveled" and can adapt to minor inconveniences such as the electricity going out. He has recently installed a generator with capacity to run the AC units installed in the rooms.
Free Internet is available at the restaurant.More 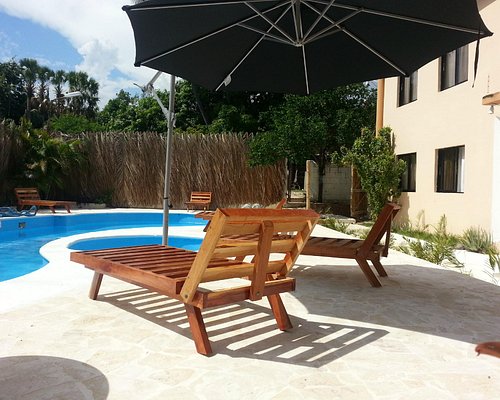 The village is small and there is nothing going on (in low season), so hotelito oasi italiana was a nice little place to stay and spend some time. The pool is clean, the view is fantastic and the rooms are large. Only thing that really bothered us is that the water didnt work often and the toilet was clogged. The owner serves great food. Breakfast was amazing, pasta and pizza are delicious and freshly prepared. Good spot to visit the area.

Report response as inappropriateThank you. We appreciate your input.
This response is the subjective opinion of the management representative and not of TripAdvisor LLC
917danl
Houston, Texas
4144
Reviewed December 3, 2018 via mobile
Lovely hotel, peaceful, safe with friendly owner and staff

My 4th stay here, love the tranquility, hotel grounds, authentic Italian cooking. And the river and ocean is a must see. Hotel has a inground pool, good: linens towels, a/c, WiFi and breakfast is included. Very safe with 24 hour security. I return in 4 weeks.

Report response as inappropriateThank you. We appreciate your input.
This response is the subjective opinion of the management representative and not of TripAdvisor LLC
jessica0234
Boston, Massachusetts
1317
Reviewed April 2, 2018
I Never stay cause the was no Room

After I book my reservation for my wedding anniversary and I got charge for my reservation, when I call the hotel to confirm my room, they told me that there was no room available, I have to call 5 times because the front desk never response the phone call, when I finally get to talk with someone very poor connection over the phone, they told me that their was not room available, as a today im still waiting for my refund, I have to end up renting a room thru Airbnb, because im already have everything ready to stay in Barahona, but not a room So Disappointed...

This review is the subjective opinion of a TripAdvisor member and not of TripAdvisor LLC
SC-DC-2017
32
Reviewed September 5, 2017
Decent and doable with young children for the price

Owner not very attentive, but responded when made requests: fixed sink, fan provided for the room to spread AC air, shown other rooms to consider options. Restaurant not available because reserved for large group. But could get coffee / breakfast in patio (paid for; not included). Electricity shut off in the night 2 of the 3 nights we stayed. The auto-switch to turn on the back-up generator did not work. So each time woke up from heat, woke up night worker, and he manually turned on generator, and then AC back on. Rooms were nice, nice view. No hot water. Staff was attentive to cleaning requests. Wifi decent only in and near restaurant, ie, not in rooms.

This review is the subjective opinion of a TripAdvisor member and not of TripAdvisor LLC
JorisV
La Paz, Bolivia
7036
Reviewed August 19, 2017 via mobile
Bit disappointing

Hard to find (once you're in los patos, about 200 metres after the river pool, a small street to the right). Happy to have found it, the other hotels were full. Lady who met us showed us their worst room (why???), then after two other horrible rooms she showed us the one we stayed in. She seemed very incapable. Room was decent size, but worn. Shower had no shower head, and even after requesting it to be made, it wasn't. Our key to the room broke in the lock, the owner got angry at us (his fault for having crappy locks), meaning we did not feel secure to leave items in the room. Power fell out many times during the night, meaning having to reset the ac more than once per night. We were not allowed to eat at the restaurant, because he had an outside group coming in. Little to no options nearby, not very nice with two young kids. The following night we asked if we could have dinner, he offered to make us spaghetti bolognaise. Not very spectacular or heavenly as I read in other reviews. Rather boring really. Time for dinner depended on the group. Breakfast (not included) again dictated by this outside (!) group. 2nd morning he refused, we got angry he then put us at his worst table and quickly made breakfast. Pancakes were very nice! Swimmingpool had no chairs or anything. Not a lot of parking space. Price was okay, but we did not like that this group was more important to the owner than his own paying guest. Do not know if there are any real alternatives in the area? Next time I would skip this town (after cooling down in the natural los Patos pool on the way) and head straight for Cabo rojo.

This review is the subjective opinion of a TripAdvisor member and not of TripAdvisor LLC
View more reviews
PreviousNext
12…10
<script type='text/javascript' crossorigin='anonymous' async onerror='__scriptLoadError(this,true);' src='https://static.tacdn.com/assets/lmr1u9.02969c47.es5.js' data-rup=