This is one of the most beautiful places that we were,the owner, and the staff are very sweet and nice.
The view is amazing the hotel is very carefully with the sanitary practices for the covid so you will be safe there.
The place have not people with covid so you guys have to be careful with that.

Trip type: Travelled as a couple
See all 96 reviews
Nearby Hotels 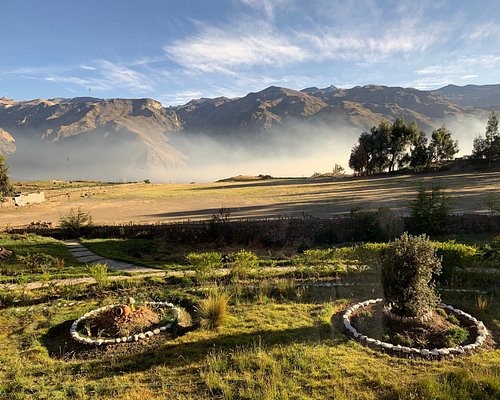 Our tour guide David was amazing with his local knowledge and passion for the area, we learnt a lot and had so much fun. He adapted the plans to fit the weather making sure that we saw everything we wanted to. The lodge itself is idyllic, the food was great, and it was lovely to warm up by the fire after our first day exploring. On the second day we spent a good amount of time at various viewpoints to see condors, not rushing off after a short time like many other groups seemed to be, we also loved the mountain biking element of this trip and would recommend it highly.

Report response as inappropriateThank you. We appreciate your input.
This response is the subjective opinion of the management representative and not of TripAdvisor LLC
keelimsmith
Birdeye, Arkansas
159
Reviewed August 30, 2019
We had a wonderful time at Colca Trek Lodge

We arrived just in time to enjoy the fire in the dining room to socialize with the other guests. It was perfect, the staff offered juice, beer and wine and kept the fire going. Dinner was wonderful, fish with potatoes (of course which were wonderful). Rooms are roomy, clean and boast a wonderful view of the sunrise at Colca, you can jump out of bed, open the curtains, get back in and watch the sunrise. Breakfast was great and the bike tour of the condors with the group was great. The tour guides were wonderful, fluent in English. The condors were plentiful on the bike ride. Lunch afterwards was pasta with veggies and a take away bag with fruits and snacks was special. They have a HUGE condor hung in the game room, got to see that!. Staff was very friendly.

Thanks for your comment . 0ur staff will always be happy to receive you again :) The lodge provides rest and nature, and sure we ll keep working in improve our service given by local and friendly people.

Report response as inappropriateThank you. We appreciate your input.
This response is the subjective opinion of the management representative and not of TripAdvisor LLC
thimoulin
Saint Louis, Missouri
1526
Reviewed August 20, 2019
Not a great value

The Colca Canyon is a great place to see, but I would not recommend doing a tour. Rather, it seems to me that it is a better value to rent a car, drive around there and stay in a nice hotel (such as the Colca Lodge with hot springs).

I will start from the beginning: If you plan do book this online know that they do not have any system implemented and everything is done over email (more prone to mistakes too). You have then to wire $100 to them to make sure you have a spot. This was more complicated than it seems with my bank and there was a $20 fee involved. Colca Trek made an exception and I transferred them the money over Western Union, which saved me such fee. Still, very cumbersome process.

I booked the 2 day tour. Initially, it was advertised that we would be picked up from our hotel and that we would go to hot springs at the end of the second day. About a month prior we received an email stating that they would not be able to pick us up, rather, we would have to go to their store to get the van. About 15 days prior to the tour we get another email stating that the hot springs are too crowded and that we would do a hike instead. It surprises me that being in this business for so long they could not anticipate how the hot springs would be and not falsely advertise such a feature in their tour.

Very well, we go on our tour. First thing to know is that the Colca Valley/Canyon is a 3h drive from Arequipa. Add in the stops to pee, have lunch, see animals (llama, vicuña, etc) and some rock formations and you've spent pretty much all of your first day with very, VERY skippable things. After dropping our stuff off at the nice hotel they have there, we go on a short hike down to where the Valley narrows down into the Canyon and watch the sunset. This was great, but lasted 30 min, maybe less.

The second day starts early. We go to the Cruz del Condor and arrive there around 7:30. No condors in sight but it was quite nice seeing the beautiful canyon with no tourists around. We go to our downhill bike experience. This lasted 30 min max, which was such a shame. Instead of touring down slowly and appreciating the vistas, our tour guide rushed the way down. Given that we were instructed to stay together and follow him, we all finished this activity so much faster than it should have been. The views are incredible. The valley and the ancient terraces are wonderful. Unfortunately we were not able to enjoy it as much as we could. We then head back to the Cruz del Condor, around 9:00 and this time we see so many condors. It is now packed with tourists too.

To end the day we go on a pretty mediocre hike to a lake. Why we didn't use this time to see more of the canyon/valley is beyond me. We then go back to the hotel, have lunch and then head back to Arequipa.

Now here's why I think you should go to the canyon but not do a tour: the best thing about the Colca, by far, is its geography and the terracing. The condor watching is also another highlight. None of this requires any knowledge. There's no hidden gems. It's right there. If you drive around, stopping at the miradores that you think are nice you'll have a much better, unique and exclusive experience, not having to share it with a 16 people tour. Our tour guide, Sabino, was a nice guy, but the information he offered is not worth the price you pay - in money terms (US$190/person) but also in having to pace yourself with the other 16 people, never really having solitude in a place that kinda requires quiet admiration, etc. Also, the food we ate was ok (I think it's almost impossible to eat bad food in Peru) and the hotel is nice, but, again, not worth $190/person.
If you are a couple, and decide to rent a car and stay in the Colca Lodge, for example, you'll spend less, stay in a much nicer hotel, spend as much time as you want admiring the canyon and can then use the savings to buy a good book on the history of the Colca ;-) .

This review is the subjective opinion of a TripAdvisor member and not of TripAdvisor LLC
Sandra U
2
Reviewed July 7, 2019
Staying @ a nice lodge but not being on one of the Colca Trek treks.

The lodge on the eastern edge of dusty Pinchollo was quite an oasis. The staff is minimal during the day, but cooks and support staff arrive in the late afternoon and the tidy bar/restaurant comes to life with a crackling fire in a fireplace, and warm delicious food prepared with care. There is a community TV in the Condor Room, but no TV screens in the rooms--just views of a garden area, and a soccer pitch, with Colca Canyon beyond it. The morning breakfast buffet was tasty, as well. We would most definitely stay again, if visiting the area!

Nothing better than receive such a nice opinion.!
0ur staff will always be happy to receive you again. The lodge provides rest and nature, and sure we ll keep working in improve our service given by local and friendly people.

Report response as inappropriateThank you. We appreciate your input.
This response is the subjective opinion of the management representative and not of TripAdvisor LLC
Teddiestravellers
Dublin, Ireland
2147
Reviewed June 8, 2019 via mobile
Superbe Lodge and location

We stayed there as part of our 2d/1n tour with colca trek. The location is so so so beautiful - the view from the rooms is incredible. There's a pool table, music, TV, games and a fireplace to chill. There's a bar which serves delicious pisco sours. Everyone at the lodge is so friendly and will do everything to make your stay perfect. Food was delicious with a great selection for breakfast. There's no heating in the room but the beds are so warm and they give you hot water bottles. Bathroom was spotless and shower super warm. We were so sad to leave - really wanted to stay longer in this magical place.

Thanks a lot for your opinion. It encourages us to improve day by day our service and facilities.
Wellcome again!!

Report response as inappropriateThank you. We appreciate your input.
This response is the subjective opinion of the management representative and not of TripAdvisor LLC
View more reviews
PreviousNext
12…16