US$46
US$44
View deal
SAVE US$2
Travelocity
eDreams
PricelineUS$46
View all 12 deals
Prices are the average nightly price provided by our partners and may not include all taxes and fees. Taxes and fees that are shown are estimates only. Please see our partners for more details.
captainormal
Oliva, Spain
3310

Lovely hotel,plants, wonderful colours and modernish furnishings a nice patio for drinks or food with a fountain and plants to make it look and feel comfortable,bedrooms clean and not to small,good helpful staff in the reception and the bar/restaurant.....

See all 50 reviews
Nearby Hotels 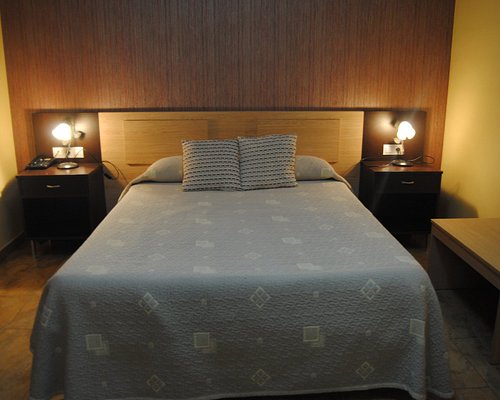 The room size was adequate and functional. Attention to detail required. Batteries in the TV remote were spent. Shower head holder was loose.
The hotel boasted a wedding salon, and one can see a smart dining room, but the breakfast and other main meals were served in a bland room with tables for ten.
Service was reasonable, but bar service totally poor, with locals being preferred to higher spending guests. Situated in a somewhat drab town opposite a bullring which I would liked to have seen in side (not when being used!)

Room tip: Try for a room near the top of the stairs as the corridors are maze like.
Ask keithf915 about Hotel Plaza Manjon
1  Thank keithf915

This review is the subjective opinion of a TripAdvisor member and not of TripAdvisor LLC
salterkb13578
Camposol, Spain
278
Reviewed April 10, 2016
Can't cope with coach parties.

Our coach party turned up slightly earlier than hotel arrival time. Welcomed at reception then things went wrong, rooms hadn't been made up and in the end some rooms had been double booked, resulting in some of our party having to stay in another hotel. Please also note they allow smoking in all rooms some of them smelt of stale tobacco. Wifi was free but couldn't be picked up in our room. Room was clean and tidy but the walls are thin allowing you to hear into other rooms and the corridors. Now onto the food, which really wasn't very good. We were a British tour group and it was very Spanish, no taste even the Spanish tour party were complaining, our tour guide tried to get them to produce better food, got a little better but not much. Drinks at the bar were expensive compared to Sanish normal prices. 3.40 euros for a small beer. Entertainment on the first night was cancelled as the Flamego dancers car had broken down, just music played too loud had to turn it down myself. Next night 4 screechers and a dancer. The Spanish all walked out saying they were terrible we stayed and laughed all night as they were so bad we couldn't stop laughing. Overall a small friendly hotel run by the family, as some have noted before they all have multi jobs. As for us Brits we can always laugh in adversity. If you are a small party or a couple you will enjoy it. But two coach loads could not be catered for.

Room tip: Our room was in the front of the Hotel overlooking the road. Very noisy if you want to sleep with the window open.
Ask salterkb13578 about Hotel Plaza Manjon
1  Thank salterkb13578