Baileys Motel
Lowest prices for your stay
US$68
View deal

US$68
US$46
View deal
SAVE US$22
Hotels.comUS$60
PricelineUS$56
eDreamsUS$68
View all 14 deals
Prices are the average nightly price provided by our partners and may not include all taxes and fees. Taxes and fees that are shown are estimates only. Please see our partners for more details.
Gabrieleumg
Bunbury, Australia
3

I've stayed only one night, it was very pleasant. Quiet and clean. Great location, close to the free CAT bus stop. Kitchen was equipped with all the basics. However, there is NO pool, has been removed years ago...So disappointing!! Expedia.com
View deal
Free cancellation
Reserve now, pay at stay
Booking.com
US$60
FindHotel
US$66
ZenHotels.com
US$88
View all 13 deals from US$60
174 reviews
We compared the lowest prices from 13 websites 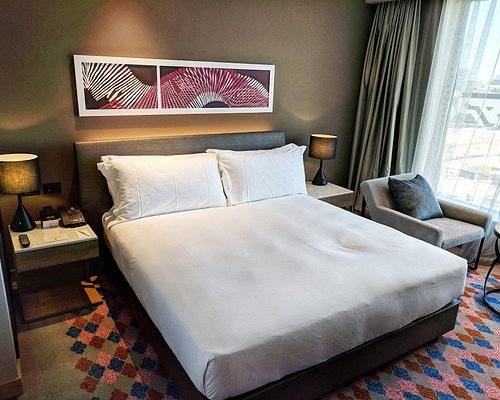 Priceline
View deal
Free cancellation
Reserve now, pay at stay
Expedia.com
US$119
Booking.com
US$120
StayForLong
US$148
View all 18 deals from US$119
2,138 reviews
0.8 km from Baileys Motel
We compared the lowest prices from 18 websites
Top Rated
Breakfast included
COMO The Treasury
US$421

Hotels.com
View deal
Expedia.com
US$137
FindHotel
US$131
Priceline
View all 12 deals from US$131
73 reviews
1.5 km from Baileys Motel
We compared the lowest prices from 12 websites
Sponsored
Aloft Perth
US$126

Hotels.com
View deal
Booking.com
US$108
Agoda.com
US$93
Expedia.com
US$108
View all 13 deals from US$93
290 reviews
1.6 km from Baileys Motel
We compared the lowest prices from 13 websites
Sage Hotel West Perth

Hotels.com
View deal
Expedia.com
US$110
Agoda.com
US$95
Booking.com
US$113
View all 17 deals from US$95
1,040 reviews
3.4 km from Baileys Motel
We compared the lowest prices from 17 websites
Baileys Serviced Apartments

Hotels.com
View deal
Booking.com
US$111
Agoda.com
US$82
FindHotel
US$149
View all 15 deals from US$82
181 reviews
0.4 km from Baileys Motel
We compared the lowest prices from 15 websites
Breakfast included
Alex Hotel

Hotels.com
View deal
Booking.com
US$148
ZenHotels.com
US$131
Expedia.com
US$149
View all 17 deals from US$131
644 reviews
1.5 km from Baileys Motel
We compared the lowest prices from 17 websites
Duxton Hotel Perth

I booked at the Motel without knowing what to expect. I was pleasantly surprised when I got there to find an efficient reception staff who were polite and quick, the room was clean and well appointed. The view from my room overlooked the park and was pleasant. It was easily accessible and the parking secure.

Room tip: My room overlooked the park and was very quiet except when the Police drove past with sirens blaring!
Ask PrathaDenmark about Baileys Motel
1  Thank PrathaDenmark

This review is the subjective opinion of a TripAdvisor member and not of TripAdvisor LLC
Mussweghier
124
Reviewed November 25, 2020
Greedy and some issues

Stayed for a week. Had requested an upper floor room which was ignored, so were allocated a downstairs room next to outside stairs, which we didn't like. Room had an unbearable bleach smell. We requested a different room and pointed to upstairs request. Opted for different room and had to pay an extra $10 a night as this one had an old, tiny dual hotplate grill and a sink.
The room was interconnected with a neighboring room, so the locked door between the rooms were an issue for sounds from the different occupants next door. There was some domestic outside one of the downstairs units on two separate mornings that resulted in them being banned prematurely of their booked stay. We have had pidgeons above our room ceiling every day, they became active after 7am. They were not on the roof but inside the roof cavity. Cleaning crew was annoying every day as they had the habit of talking loud with each other while servicing the vacated rooms with doors open, dragging vaccuum cleaners along the concrete paths rather than carrying them, and they were constantly yelling at each other across the complex.
We paid about $62.50 a night for the week plus the extra $10. We wanted to extend for another week but this where the greed kicked in...they said rates were now higher and so requested $92 per night which we found way too much, especially since this is a simple place. Moreover, they could've easily allow us to stay at the rate we had paid. He said he would not be charging us the extra $10, which means he thought the room was now actually 'worth' $102 a night! So we checked out after the week.

This review is the subjective opinion of a TripAdvisor member and not of TripAdvisor LLC
Cruisedontsnooze
Busselton
4525
Reviewed March 7, 2020
No swimming Pool!!!

Booked this place a few months in advance. Reason being its a short walk to the Optus stadium, and it had a pool. (We have stayed here before.) This was the last leg of our 2 week holiday. Arrived from Wave Rock on a 37 deg day and both ( my Canadian visitor and myself) were looking forward to jumping in the pool. Imagine my disappointment on being told there is no longer a pool and it has been turned into a SMOKING AREA! Really!!!! Doing away with a pool and Encouraging smoking! I was gobsmacked. really pissed off to be honest. It was bloody hot. I hope they re -look at this.
You may want to be aware of very lit up rooms at night....The rooms have outside lights that are NOT on sensors therefore stay on all night lighting the rooms up like a blimmin xmas tree! The curtain rails jut out quite a bit from the wall so staff ended up getting towels and blocking it off. Didn't help much as still had the sides to contend with. I hooked the curtain in the door frame and quickly shut the door. lol helped a bit more. I really hope they look into new curtain fixtures. Im sure they can. afford it after all..... they must be saving money by not needing to clean a pool out anymore with chemicals!!!

Just watch if you stay in Room 12. Shower is walk in and the water goes half way into the room. Dont put your clothes or bath towel on the floor! Need to be more sloped towards the drain....OR a bigger size drain may help?

I did speak to the staff and manager about my issues. All the staff were very nice and helpful. Guess at the end of the day its not them that make these decisions.....they just have to do as they are told. Manager however, hopefully should be able to liaise with owners??

PLEASE PUT THE POOL BACK, this is Perth after all , it gets hot and you can practically still swim from October to April and you are nowhere near a beach.

This review is the subjective opinion of a TripAdvisor member and not of TripAdvisor LLC
Interstateworker
Sydney, Australia
52
Reviewed March 5, 2020
Well-located and affordable

I had a spacious, quiet room. I was in Perth for a meeting in the CBD which was easily accessible by either a 20 minute walk or the very convenient free city bus service around the corner. Good cafes nearby and great walks down to the river, especially around Claisebrook Cove and Victoria Gardens, and across the road from a park. Excellent value for the price. Downsides: no breakfast available, and the Italian restaurant on-site is very expensive if you are just wanting to eat in the motel.

This review is the subjective opinion of a TripAdvisor member and not of TripAdvisor LLC
Julie N
Port Macquarie, Australia
147
Reviewed March 4, 2020
Good budget motel

No pool at this motel and only one washer & dryer

For those on a budget it was great value