US$37
US$29
View deal
SAVE US$8
Free cancellation until 21-05-21
Expedia.comUS$36
eDreamsUS$37
PricelineUS$37
View all 14 deals
Prices are the average nightly price provided by our partners and may not include all taxes and fees. Taxes and fees that are shown are estimates only. Please see our partners for more details.
Cynda Y
Vancouver, British Columbia, Canada
2

Rooms were clean and comfortable. First time to Cambodia so I had nothing to compare it to but no bugs not even a roach which was at another hotel we stayed at in another city. Clean common areas and I really liked the safety deposit box as it was a locked room that only a staff member could open and stayed with the key. You then had a locker assigned to your room and that locker had a key lock as well as a small padlock. That was most reassuring that our valuables would be safe.

Staff were very fast in getting all our luggage loaded and unloaded. Not an easy task as there are no elevators (I think that that is common in Cambodia as another hotel we were in did not have elevators either). Free internet on two computers is a really handy plus.

Also we had all our luggage stacked in the lobby for a while and it was watched by staff. Everything was safe.

Restaurant has good food prices are reasonable. Really good omelettes. Great attentive staff there as well. Thanks and I would stay there again should I be lucky enough to come to Cambodia again.More 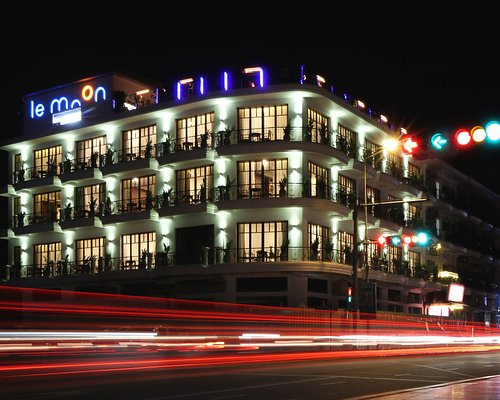 Breakfast included
Sponsored
Amanjaya Pancam Suites Hotel
US$75
Booking.com
View deal
Hotels.com
US$97
Agoda.com
US$64
FindHotel
US$125
View all 15 deals from US$64
502 reviews
We compared the lowest prices from 15 websites 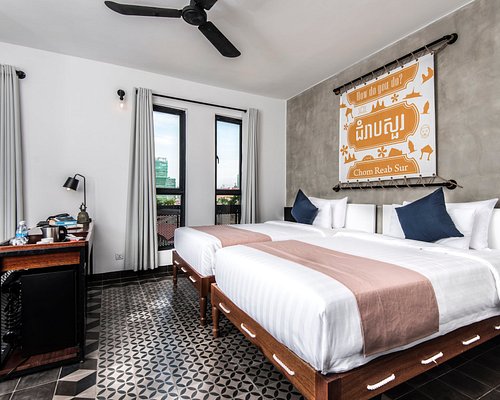 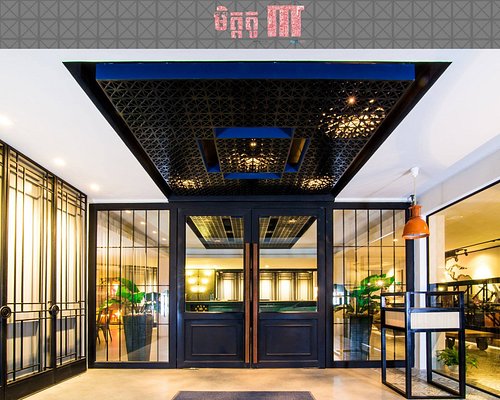 Taking safety measures
We compared the lowest prices from 16 websites
Raffles Hotel Le Royal
US$213
Booking.com
View deal
Free cancellation
Expedia.com
US$190
Agoda.com
US$180
ZenHotels.com
US$283
View all 17 deals from US$180
2,403 reviews
1.2 km from Ostro Hotel

This hotel is fine. It's located very close to the river, a great night market and lots of bars and restaurants. The rooms are mediocre, no window, strange smell and I think we had bed bugs. It's quite cheap and centrally located so I guess you get what you pay for. I wouldn't spend a long time here but it's fine as a stopover as you pass through Phnom Penh, plus with all the things to do you won't have to spend much time in the room anyway!

We are thankful for your time written down a feedback for our hotel. We are very sorry if we could not make your stay with us a pleasant one; however, we are definitely sure that there is no BED BUGS at our hotel as you have mentioned. Anyway, we will take this case into action and double check our rooms.

We wish you a great holiday in Cambodia.

Thanks with best regards,
Ms. Yabee

Report response as inappropriateThank you. We appreciate your input.
This response is the subjective opinion of the management representative and not of TripAdvisor LLC
ka--takkkkkk
Phnom Penh, Cambodia
96
Reviewed June 20, 2013
good value

good clean rooms at a great price , located almost on the river , close to all the entertainment
close to cheap restaurants. some rooms can be noisy but I never had a problem , I rented there for 3 months. I got an aircon room for 10 usd

We, the hotel team members, would like to "THANKS" you for giving us a very good feedback on our tripadvisor page. We are glad you did enjoy your stays with us.

We look forward to welcoming you back in your next visit.

Report response as inappropriateThank you. We appreciate your input.
This response is the subjective opinion of the management representative and not of TripAdvisor LLC
John J
Vancouver
1217
Reviewed May 4, 2013
Excellent for the price

I stayed three nights and was impressed. The hotel is extremely clean. Not just the rooms but the hallways and other areas. The room I had was freshly painted and large. The washroom was nicely tiled and large as well. The door was heavy, solid wood and secure. They have a secure room with lockers for valuables. Staff was very friendly and warm. Location perfect. A block from the river.

The best part was the price. I paid $20 total per night. It was the off season.

I highly recommend this hotel. But it is a budget hotel.

This review is the subjective opinion of a TripAdvisor member and not of TripAdvisor LLC
ausnomad
Brisbane, Australia
31
Reviewed April 29, 2013
Our thoughts on this hotel

Normally leave reviews to those that eloquently key great reviews but:
Booked the hotel and the email com’s were great with mixed reviews I still booked Indochine2, when we got to the room brushed off dead insects from the bed linen which were sorter clean with tears – the towels that was something else, my partner said – not showering or washing in the bathroom, well we did - just hands – too tired too big a day and hungry went off to the great Thai restaurant just up the street and had made a decision to move on next morning, at the restaurant we joined a expat living in PP and in discussions a few hotels were suggested so went out directly after looking. Again 5am could not sleep ‘cause of the decision, went out around 5.15 woke reception guy laying down on a camp bed in front of reception he called to the security guy –also asleep to open the grill I returned 45 mins later both were slumped fast asleep and I picked up my key from the spot on the desk where I left it – now that I do worry about – security? Well they didn’t wake up - Sleeping well you gotta do it sometime. Paid $20 more and went to great rooms at the Lux, yes it is on ‘that pub/bar/club type street’ with interesting sights coming in and out but all good with clean everything with good breakfast, back in its day this would have been a very up market business hotel and still is used by some business as well as those guys entertaining local business girls

This review is the subjective opinion of a TripAdvisor member and not of TripAdvisor LLC
Oliver M
London, United Kingdom
11072
Reviewed April 4, 2013
OK hotel, good location, but no lift!

This is an OK hotel. The location is fantastic, and the staff were helpful. They hotel was basic, but the rooms relatively spacious, though the decor and furnishings were a bit out-dated and a slight musty smell in the room suggested age and wear. The Air-Conditioning was weak, but thankfully the room fan was fine. There is no lift, but they have a porter who will carry your bags. Breakfast is simply but what is nice is that it is in the next door restaurant and is from 6-30am. Wifi was good throughout and showers., etc all worked well. I paid around $20/night, so it was fine for the money. FYI a tuk-tuk from the stations to the hotel is around $3-5.