Orbitz.com
Booking.com
eDreams
View all 13 deals
Prices are the average nightly price provided by our partners and may not include all taxes and fees. Taxes and fees that are shown are estimates only. Please see our partners for more details.
Terryw01
11

Recently stayed for 9 nights and cannot speak highly enough. Food and service was excellent. Nightly entertainment was great and Jimmy can sing a great tune. Elsina looked after us like we were part of the family and made our stay special. Julie and I will return More

Thank you for your wonderful Review.
We shall passed on your words to Elsina and the rest of our staff here for making your stay with us a memorable one.

We looking forward to welcome you here at Breakas again anytime soon.

Report response as inappropriateThank you. We appreciate your input.
This response is the subjective opinion of the management representative and not of TripAdvisor LLC
See all 1,174 reviews
Nearby Hotels Expedia.com
View deal
Hotels.com
ZenHotels.com
US$187
Travelocity
View all 14 deals from US$187
199 reviews
4.9 km from Breakas Beach Resort Vanuatu
We compared the lowest prices from 14 websites 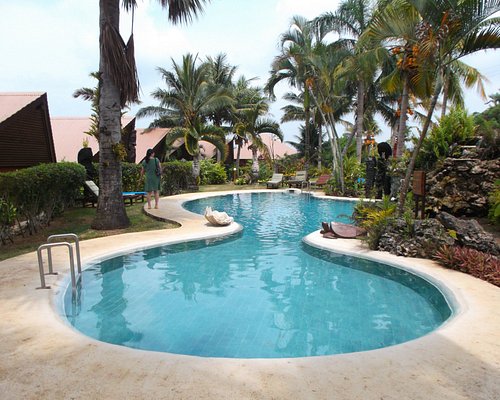 Expedia.com
View deal
Free cancellation
Pay up to 12X
Priceline
US$150
Agoda.com
US$135
Hotels.com
US$181
View all 10 deals from US$135
782 reviews
9.5 km from Breakas Beach Resort Vanuatu
We compared the lowest prices from 10 websites
Mangoes Resort
US$126

Expedia.com
View deal
Pay up to 12X
Priceline
US$148
Agoda.com
US$73
ZenHotels.com
US$160
View all 15 deals from US$73
535 reviews
4.9 km from Breakas Beach Resort Vanuatu
We compared the lowest prices from 15 websites
Holiday Inn Resort Vanuatu

Priceline
View deal
Expedia.com
US$108
Hotels.com
US$108
Booking.com
US$108
View all 12 deals from US$108
204 reviews
1.4 km from Breakas Beach Resort Vanuatu
We compared the lowest prices from 12 websites
Breakfast included
MG Cocomo Resort
US$97

Priceline
View deal
Free cancellation
Expedia.com
US$97
Booking.com
US$87
Trip.com
US$103
View all 12 deals from US$87
328 reviews
6.3 km from Breakas Beach Resort Vanuatu
We compared the lowest prices from 12 websites
Ramada Resort by Wyndham Port Vila
US$215

Priceline
View deal
Free cancellation
Booking.com
US$140
Destinia.com
US$124
ZenHotels.com
US$222
View all 15 deals from US$124
524 reviews
3.3 km from Breakas Beach Resort Vanuatu

I surprised my wife with a 4 night stay at this resort for a Christmas present.
Crossing my fingers and hoping I made the right choice.
Well with a big smile my wife loved it. This place is only for couples (we have 4 kids) so just to chill, in the sun on the lounge chairs, having delicious cocktails, good food and we did have 2 great nights of entertainment (shows)
My wife would stay again. We both recommend this place.

Thank you Robert for the lovely review
You are right Happy Wife Happy Life
Glad you both enjoy your stay with us
See you soon
Regards,
Alsa

Report response as inappropriateThank you. We appreciate your input.
This response is the subjective opinion of the management representative and not of TripAdvisor LLC
Peter B
Brisbane, Australia
110148
Reviewed January 22, 2020
New Years Eve in a pool!

We stayed for five nights after Christmas. We chose Breakas specifically because it's kid free and it was a great decision. As other recent reviews have said the resort was full but you would never have known it except for the time it took for meals to come out. Island time, relax. It reminded us of the Cook Islands! We took our shoes off when we arrived and didn't put them back on until we left. You can be barefoot everywhere. The staff were great, especially the team in the bar, although it'd be wrong just to single them out as everyone was great. We stayed in a garden fare. Roomy, comfy bed, tea and coffee facilities, iron and board and it stayed quite cool just with louvres open and ceiling fan on. The mossies didn't bother us as we kept mossie coils lit. Loved the kid free pool area, especially the bean bags, but again as others have said there needs to be some more shade around the pool/along the beach (as in more umbrellas). If you're going to go swimming in the ocean take reef shoes as there's lots of broken coral. On the whole the food was pretty good. Included buffet breakfast was good. A couple of misses, including at least for us the seafood platter that was pretty ordinary (and expensive) but New Year's Eve was a huge hit, including the seafood! Don't go expecting cheap, it's Aussie bistro prices, and why shouldn't it be? Happy hour every night was great. Loved the coconut mojitos, maybe too much ;) Not often we know we'll return somewhere because the world is a big place but we will return to Breakas.

Room tip: If you can afford beachfront do it, otherwise all fares are the same. Garden fare 16 that we stayed in was quiet, but close to everything
Ask Peter B about Breakas Beach Resort Vanuatu
3  Thank Peter B

Greetings from Breakas Beach Resort and thank you for your great feedback and a bit of constructive comments which we could help us to improve our services.

We will pass on these feedback to our staff.

Looking forward to welcome you back here at Breakas in the near future.

Report response as inappropriateThank you. We appreciate your input.
This response is the subjective opinion of the management representative and not of TripAdvisor LLC
Ericgroszmann
Buderim, Australia
54
Reviewed January 15, 2020
Feet in the sand.

My partner and I stayed for 10 nights over the Christmas/New Year period in this wonderful resort. We had a beachfront fare where you walked straight out onto the sand and then on to the ocean, infinity pool or restaurant/bar. The Breakas staff were very friendly and made us feel welcome the whole time. Meals were outstanding, the menu was comprehensive and if you couldn't find something you liked then you were very hard to please. Our fare with its outdoor shower was one of the best rooms we've stayed in anywhere. And I must mention....no kids, only a few bogans here and there. We would return to Breakas without hesitation and enjoy the wonderful relaxing "feet in the sand" experience.

Greetings from Breakas Beach Resort and thank you for your wonderful feedback from you holiday with us at Breakas.
Our staff are so pleased about the feedback and we are all looking forward to welcome you both for your next holiday at Breakas in future.

Report response as inappropriateThank you. We appreciate your input.
This response is the subjective opinion of the management representative and not of TripAdvisor LLC
ecosseone_1
Townsville, Australia
5837
Reviewed January 13, 2020
Beached at Breakas

We stayed here for a week over Christmas so it was really busy (full). Despite that it never felt crowded. The only down side to being so busy was the kitchen sometimes struggled to keep up. The food was mostly very good and the choices of menu items and specials were wide. Buffet Breakfast is included in the room rate and is a worth taking advantage of. The restaurant setting was especially nice when the weather allowed tables to be placed on the sand next to the pool for dinner. The majority of the staff were friendly, happy and informative. We had a garden Fare one step back from the beachfront which was for us, an ideal location. The bungalows are a good size, well appointed and serviced daily. The pool is large and deep. The bar gets busy at happy hour but nobody minds and the staff always have a smile. The beach is quiet and relaxing, (no kids) but does need some more shade in the area close to the pool. Breakas is a little remote but close enough to town that you can visit anytime for a few dollars on one of the local buses which are in themselves a great experience. Talk to the drivers, listen to some tunes and see the locals do what they do. We will be back.

Thank you Ecosseone_1for your review
Will certainly pass the feedback to all the staff
See you soon
Regards,
Alsa

Report response as inappropriateThank you. We appreciate your input.
This response is the subjective opinion of the management representative and not of TripAdvisor LLC
923debrar
Melbourne, Australia
397
Reviewed January 7, 2020
Nice resort

Stayed here for 9 days 3 couples. The place is a little out of town no problem,no kids allowed made swimming in pool great. Beautiful beach frontage but as most parts Vanuatu reef shoes are needed. The staff are friendly and happy hr was buy 1 get1 free great bargain. The meals from restaurant for lunch and tea were really nice but reason for 4 stars not 5 is because meals took so long to come out. We waited from 1 to 2 hrs for tea .

Hello there,
Thank you for your review
Will pass the thoughts to others
Please note Breakas is always advertise as a 3.5star.
Thank you again
Lukim yu
Regards,
Alsa

Report response as inappropriateThank you. We appreciate your input.
This response is the subjective opinion of the management representative and not of TripAdvisor LLC
View more reviews
PreviousNext
123…
<script type='text/javascript' crossorigin='anonymous' async onerror='__scriptLoadError(this,tr