Priceline
CheapTicketsUS$164
Orbitz.comUS$164
View all 13 deals
Prices are the average nightly price provided by our partners and may not include all taxes and fees. Taxes and fees that are shown are estimates only. Please see our partners for more details.
JohnL3200
Brisbane, Australia
41

Review of Sunset Bungalows Resort
Reviewed May 7, 2018 via mobile

Gladys, Jenni and the team made the start of our honeymoon one to remember. They were exceptionally helpful and friendly - we are planning our return visit already. The lapping water against our bungalow made afternoon naps a must. There was very easy access into Port Villa and chilling at the resort was easy and just what we needed. The tranquil pool, easy room service and delicious food (especially the osso bucco), and DVDs at the resort made an easy day in. The staff also recommended a local concert which was great fun and a nice insight into the island life.

Trip type: Travelled as a couple
See all 624 reviews
Nearby Hotels

Top Rated
13% less than usual
Traveller's Budget Motel
US$56
US$49
Tripadvisor
View deal
Reserve now, pay at stay
Expedia.com
Hotels.com
CheapTickets
US$56
View all 14 deals from US$49
418 reviews
3.7 km from Sunset Bungalows Resort
We compared the lowest prices from 14 websites 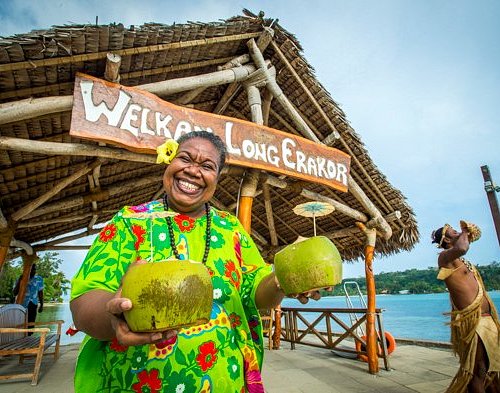 Breakfast included
Erakor Island Resort & Spa
US$223
Tripadvisor
View deal
Pay up to 12X
Expedia.com
Hotels.com
CheapTickets
US$223
View all 12 deals from US$223
911 reviews
5.2 km from Sunset Bungalows Resort
We compared the lowest prices from 12 websites 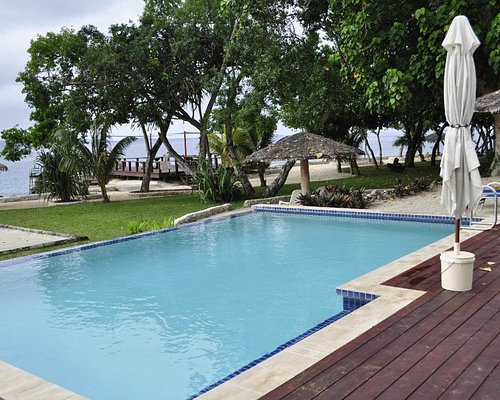 Expedia.com
View deal
Hotels.com
Travelocity
US$96
Booking.com
US$136
View all 12 deals from US$96
211 reviews
12.2 km from Sunset Bungalows Resort

Yes this isn't a flash resort but it doesn't pretend to be one either.
It's a great little place to stay with very friendly staff.
It would be nice, however, if the managers who are often present took the time to say hello. We were there six days and were never acknowledged.
Breakfast isn't enormous but adequate.
Room was well maintained.

This review is the subjective opinion of a TripAdvisor member and not of TripAdvisor LLC
kiwi10Nz
NZ
188
Reviewed January 7, 2018
Sadly a drop in standard since change in Management

The previous managers, Audrey and Greg left in August last year and coming back you can certainly see the difference. The care and attention to detail and customer service is seriously lacking. What was a lovely place to stay and eat and drink is no more.

This review is the subjective opinion of a TripAdvisor member and not of TripAdvisor LLC
Mark L
Brisbane, Australia
148
Reviewed January 5, 2018 via mobile
For the price very disappointed

Sunset Bungalows is a 2-3 star resort and is not value for the price paid. Dark Room, Air conditioning does not work properly, food is 50/50 at best, line is crap and mattress needs replacing, towels smell funny. Not a nice experience. If all bedding and towels were replaced this would be a much better location. Local staff are lovely which makes it difficult to give a 1 star but that's what I feel it deserves at this price. Stayed in a waterfront bungalow.

This review is the subjective opinion of a TripAdvisor member and not of TripAdvisor LLC
hinz_Auckland
New Zealand
3528
Reviewed January 3, 2018 via mobile
Avoid if you can- total disaster!!

My husband and I just returned from a trip to Vanuatu and were supposed to stay at sunset for 4 days from 27 December till 31st. It was so bad and so depressing that we checked out after 2 days and went to coco beach resort. To start with there was a massive confusion over booking and rates despite having exchanged several emails before coming, this took half an hour to sort out when we reached the resort (it’s not a proper resort by the way). Anyway things happen and it got sorted so we let that go, no big deal.
Now the room was Ok but everything felt dirty. Balcony overlooked lagoon which was overwater and you cannot swim as there is no approach to the water. Just look at it if it looks pretty. The room smelled and there were insects everywhere in the room, on the tea coffee service table, bedside tables, coffee table- everywhere.
The swimming pool was dirty for the 2 days we were there and we were told the guy was supposed to come and clean it but didn’t turn up so he is being called. I think the day we left it got sorted but not sure.
No drinking water in the room and bare minimum toiletries in the bathroom.
The biggest turn off was the place itself, other than going to the restaurant and sitting in your room there was absolutely nothing you can do there. It’s bungalow after another in a straight line and few step to the restaurant.
We had dinner the first night at the restaurant and my steak was dry and over cooked. For the price it was terrible. The next day we hired a car and were out the whole day as we didn’t want to stay inside. That night tired we decided to order food in room. Placed an order for chicken wings and garlic bread with hummus from the very limited room service menu that has only snacks. After 10 minutes we got a call that they are out of chicken wings, we then changed it to a sandwich. When the food arrived the garlic bread was on its own. No explanation. When I called to enquire about the hummus that was to accompany it as per the menu I was told they were out of chick peas and so no hummus. That’s it!!
The staff was nice and courteous but clueless. I felt sorry for them. All through our stay never saw anyone resembling a manager even though the Chinese resort owners we always seen hovering around the reception area no one approached us to ask us how we were getting on and if we had problems or apologise about the pool- we had let the reception staff know that we are unhappy with the services and the pool not workable and will be checking out early. However nobody from the management cared. The customer service was next to none.
Last leg of our stay we stayed at cocomo resort almost next to it for 3 days and it was fabulous. No complaints whatsoever- so better I stay elsewhere than waste time here.
I travel a lot and having been a part of the hospitality business myself always try and let go of minor things but this was beyond hopeless.
Never again!!

This review is the subjective opinion of a TripAdvisor member and not of TripAdvisor LLC
TLG10
Wanaka, New Zealand
34
Reviewed January 2, 2018 via mobile
Don’t stay here

We were booked to stay at Sunset Bungalows for six nights. We reluctantly stayed for three nights whilst we sourced alternative accommodation.

The Sunset Bungalows website and advertising in its rooms clearly states the following :

‘A pool with a waterfall to swim in and relax by’ the reality is :
‘ a dirty pool with the pump not working, a slimy fake waterfall , rotten wooden loungers x 4 with ripped old dirty cushions’

‘Enjoy snorkeling in the lagoon - gear provided’ the reality is:

‘ no snorkeling allowed in the lagoon’

Aside from this false advertising other aspects of the accommodation were also highly unsuitable. This included:

No hot water for showering

Stained and dusty mosquito canopy over the bed

Towel rail fell off the wall after 1 night

Springs poking through the mattress

Dining room set for two places every day even though we were a group of four and no attempt made to move furniture for us .

The male manager was unhelpful, rude and arrogant when we came to him with our concerns - in fact it was only with great reluctance that he fronted up, initially he kept sending the young receptionist back to us while he hid around the corner - a totally unprofessional and unacceptable way to treat your guests