US$54
US$49
View Deal
SAVE US$5
Free cancellation until 21-03-19
Expedia.comUS$49
TravelocityUS$49
Trip.comUS$49
View all 13 deals
Prices are the average nightly price provided by our partners and may not include all taxes and fees. Taxes and fees that are shown are estimates only. Please see our partners for more details.
Thezigmeister
Ventnor City, New Jersey
3817

Had a wonderful four day stay at the Golden Nugget. Room service for breakfast was delivered within twenty minutes. Everything was delicious and excellent service. Dinner at Grotto is always a pleasure. Bartenders Billy and Dante are the absolute best, Dave the manager always stops by to check on Us. Love the chicken parmigiana, but the pizza is to die for. Had dinner at the Chairman’s Club a few nights. One of the best clubs in the city with top notch service. They have a variety of food items, something for everyone. Did I mention our beautiful Maria Suite?? Compliments of the best host in AC, Mr. Adrian Ford. Thanks Golden Nugget for a fantastic mini vacation! What we truly appreciate more then anything else is your wonderful staff. These people are the backbone of the GN and always make us feel welcome,More

Report response as inappropriateThank you. We appreciate your input.
This response is the subjective opinion of the management representative and not of TripAdvisor LLC
See all 1,667 reviews
Nearby Hotels 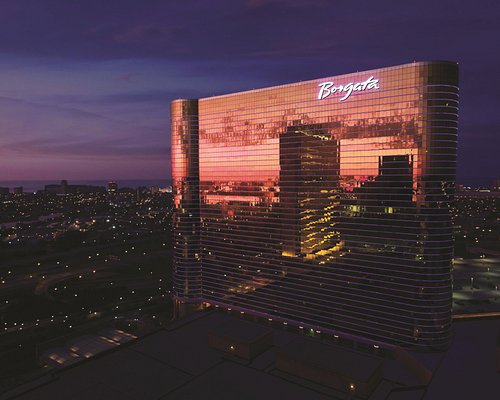 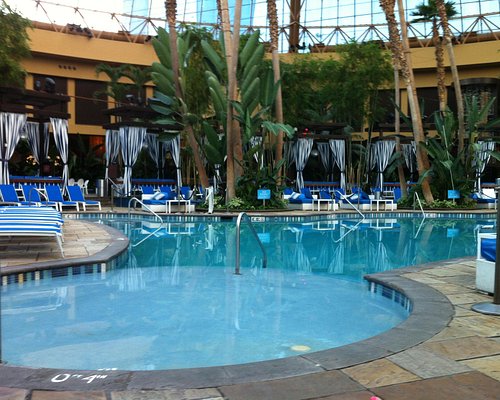 Harrah's Resort Atlantic City
US$54
Booking.com
View Deal
Free cancellation
Hotels.com
US$54
Expedia.com
US$54
Priceline
US$54
View all 19 deals from US$54
30,462 reviews
0.6 km from Golden Nugget

Taking safety measures
We compared the lowest prices from 15 websites
Resorts Casino Hotel
US$59
Booking.com
View Deal
Free cancellation
Expedia.com
US$59
Trip.com
US$56
Hotels.com
US$59
View all 15 deals from US$56
4,505 reviews
2.3 km from Golden Nugget

We come back again and again because we get perfect service from check in to check out every time we stay at the Golden Nugget Hotel and Casino. Valet greets us with the same smile we see on every staff member in the place. Kathy in the Spa continues to give my wife and i great above and beyond treatments that help make our trips like luxury vacations! A HUGE thank you to the whole staff...

Room tip: over looking the pool gives you a beautiful view of the city
Ask JOSEPH W about Golden Nugget
Thank JOSEPH W

Report response as inappropriateThank you. We appreciate your input.
This response is the subjective opinion of the management representative and not of TripAdvisor LLC
Johnw1964
Clementon, New Jersey
32
Reviewed December 8, 2019
The whole ninth floor smelled like marijuana

Casino host is great, I checked in went to gamble was getting my but kicked so decided to go back to room. Exited the elevator and the smell of marijuana was overwhelming. The room even smelled! I checked out, I work for the government and can not be exposed or even suspected of something of this nature. I checked out 3 hours later and the nugget still had the nerve to charge me the $20. I guess they need it more than me..... I even left maid a tip. The smell made me sick and I did not want to wait in line so I may bell hop aware of situation. I was never contacted, no apology, nothing! May have to explore other properties! Was supposed to be fun night since wife was in Missouri and she suggested go have some fun, ughhhh!

We’re so sorry to hear about your experience with us. Can you email us more details so we can look into this further for you? GNACSocialMedia@gnacm.com. Thanks- GN

Report response as inappropriateThank you. We appreciate your input.
This response is the subjective opinion of the management representative and not of TripAdvisor LLC
MLMC1991
12
Reviewed December 8, 2019 via mobile
Customer Service Training Needed

Dealt with an extremely rude employee at the reward card desk who claimed she was the supervisor on duty at the time. I had spoken with a member of that team earlier in the day about upgrading my card to the next level and the points required to do so, whether or not I’d be able to actually receive chairman status since I already had upgraded that year. The initial employee I dealt with was very nice and helpful, informed me I had X amount of tier points left to earn and that I could get it before the end of the year, and Informed me about double tier point days to help me get there. When I came back later that date after accomplishing the tier points needed I was told by the supervisor on duty that I could not get it. She stated due to me upgrading already. I asked politely where it says that and that I was informed otherwise just that morning. When i informed her of that she kept requesting the name of who I spoke with, which I did not get. I attempted to describe the employee and she curtly told me she needed a name. She refused to show me where what she was stating was disclosed on the terms of the program, I had achieved 10,000 points, which is what the program is based on to upgrade to chairman level. She stepped away without saying anything and left my family and I staying there, went into another room for several minutes, came back with two cards and handed it to me and then walked away again without a word spoken. I stopped her as I didn’t understand what just happened. She rudely told me she’s making a note on the account. She was extremely disrespectful the whole time, and elevated the situation to turn into something that it shouldn’t have been. I spent a lot of money and time at the casino throughout the year to achieve the next level as I enjoyed playing and staying there as well as attending events there. But this “supervisor” made me feel like I got special treatment but not in a positive way. Her lack of customer service skills make me question why she is in a position designed to help customers. I work in customer service myself and remained as calm as I could despite her willingness to help and seemingly to only want to put up walls. Her tone, attitude, and inability to communicate what she was doing or why she suddenly changed her tune and gave me the upgrade I deserved was ridiculous and made me extremely uncomfortable. It’s not a nice feeling being told you are wrong and that what you were told earlier wasn’t right after spending hundreds of dollars. Lack of empathy, customer service skills and that overall experience will keep me from ever visiting again. My money can go elsewhere.

This review is the subjective opinion of a TripAdvisor member and not of TripAdvisor LLC
lucillejoe1974
Freehold, New York
56
Reviewed December 8, 2019 via mobile
Weekend trip

we love Adrian Ford. We love the Golden Nugget. Great place Very accommodating. So happy to spend our time there Rooms are great and so are the restaurants. Best casino in AC. So happy to be part of GN family

Report response as inappropriateThank you. We appreciate your input.
This response is the subjective opinion of the management representative and not of TripAdvisor LLC
L7135AYgregp
Nesquehoning
31
Reviewed November 26, 2019
I liked the location that is was away from the majority of casinos.

Room was very nice. It was large and had a decent view of the marina. The shower had was fabulous and the water was extremely hot. The room also had a nice couch. There are a lot of options as far as eating in the casino.

Report response as inappropriateThank you. We appreciate your input.
This response is the subjective opinion of the management representative and not of TripAdvisor LLC
View more reviews
PreviousNext
1…789…278