Another Alternative to Hard Rock - Review of Caesars Atlantic City

Caesars Atlantic City
13 people are viewing this hotel
Lock in the lowest price from these sites
US$124
US$114
Free cancellation until 21-05-21
Reserve now, pay at stay
View deal
FindHotelUS$121
Agoda.comUS$114
HurbUS$114
Expedia.comUS$114
Hotels.comUS$114
PricelineUS$124
View all 18 deals
Prices are the average nightly price provided by our partners and may not include all taxes and fees. Taxes and fees that are shown are estimates only. Please see our partners for more details.
leafoftea
Roanoke Rapids, North Carolina
52

Another Alternative to Hard Rock

Review of Caesars Atlantic City
Reviewed 4 weeks ago via mobile

Decent stay even though it was a last minute option since Hard Rock wanted to charge us.
The room was clean,. No housekeeping service since they were short on staff. Last visit they said was because of Covid.
So beware of this in the future.

Room furniture needs to be painted or replaced. Friends room looked the same.More

Thank you so much for your rating! We are so sorry for any inconveniences during your stay. We thank you for staying with us and hope to see you again very soon!

Report response as inappropriateThank you. We appreciate your input.
This response is the subjective opinion of the management representative and not of TripAdvisor LLC
See all 18,422 reviews
Nearby Hotels 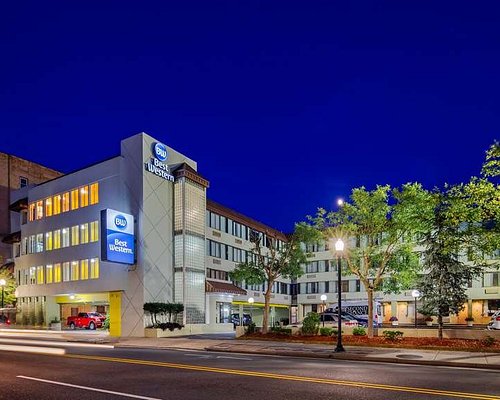 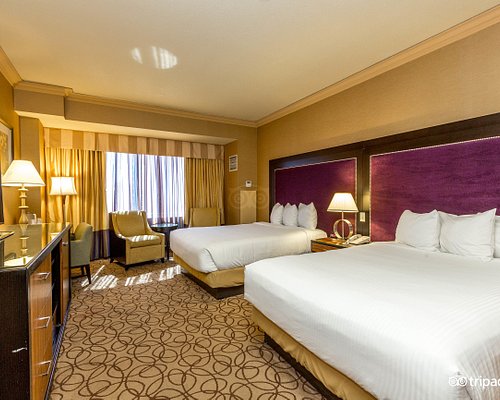 Showboat Hotel
US$75
Booking.com
View deal
Free cancellation
Hotels.com
US$68
Trip.com
US$58
StayForLong
US$83
View all 17 deals from US$58
949 reviews
1.6 km from Caesars Atlantic City
We compared the lowest prices from 17 websites 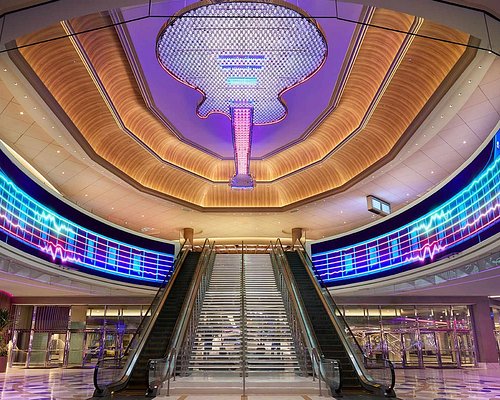 Taking safety measures
We compared the lowest prices from 21 websites
Harrah's Resort Atlantic City
US$95
US$84
Booking.com
View deal
Free cancellation
Reserve now, pay at stay
Hotels.com
US$84
FindHotel
US$90
Priceline
US$95
View all 18 deals from US$84
30,500 reviews
3.2 km from Caesars Atlantic City

Taking safety measures
We compared the lowest prices from 16 websites
Ocean Casino Resort
US$160
US$129
Booking.com
View deal
Reserve now, pay at stay
Hotels.com
US$129
FindHotel
US$129
Trip.com
US$160
View all 20 deals from US$129
1,249 reviews
1.9 km from Caesars Atlantic City

So disappointed in our room. It was so small l with absolutely no view. Toilet kept stopping up. I complained to the front desk without any assistance. The front desk clerk seemed unbothered. I never had a problem before staying at this hotel. It made me so depressed when it was time to go to the room. We felt claustrophobic

Thank you so much for taking the time to provide us with your feedback. We apologize for the inconveniences you experienced during your visit & we hope you give us another opportunity to deliver a 5-star experience.

Report response as inappropriateThank you. We appreciate your input.
This response is the subjective opinion of the management representative and not of TripAdvisor LLC
Georgiegurl1966
1
Reviewed April 2, 2021
Very pleasant experience

I really enjoy staying here. Everyone was so nice and helpful starting at the making of the reservation, throughout my entire stay. My room was so clean and covid precaution is followed strictly. I can't wait until I get to come back.

Report response as inappropriateThank you. We appreciate your input.
This response is the subjective opinion of the management representative and not of TripAdvisor LLC
ShellyP1973
Philadelphia, Pennsylvania
175
Reviewed April 1, 2021 via mobile
Needs more options

We were celebrating our 9th anniversary, we usually stayed at Ballys but decided to go to Ceasars this time.
Check in was a long wait, as they only had 1 person checking people in for diamond and one person for everyone else and the kiosks were not working. We waited inline for about 45 minutes. When we checked in, Kenya the lady checking us in was very pleasant even after a customer just yelled at her. I commend her. Onward to our room. We had to pay extra for a Oceanview room which is crazy. The hotel was nice. The view was okay but compared to ballys, I rather have the panoramic room. The shower in Ceasars is crazy. They have a seat there but the water sprays through the door and on the floor. The hotel itself is nice but there is no indoor pool or hot tub except for the spa which is closed. The only food choices is the restaurants and the little area that sells pre-made sandwiches and Gelato. They don't have anything freshly made. We had to order from a take out place for sandwiches. The prices for sodas and snacks are outrageous. Bring your own....you will save so much money. If you are looking for breakfast, bills gyro is a good low price option.
If Cesars would have more options as far as food and coffee, with lower prices,I think they could be a great Hotel.

Thank you so much for taking the time to provide us with your feedback. We apologize for the inconveniences you experienced during your visit & we hope you give us another opportunity to deliver a 5-star experience.

Report response as inappropriateThank you. We appreciate your input.
This response is the subjective opinion of the management representative and not of TripAdvisor LLC
821jamesv
FLORAL PARK
4934
Reviewed April 1, 2021 via mobile
Casino Umprepared

Seems like Caesars is unprepared for an increase in travel as COVID conditions improve. Very few table games open and when they are they are full. Had to wait till 11pm last night for them to open up a table than many people had asked for. I’m not sure why they have this shortage in dealers, is it cause there aren’t enough or they aren’t calling enough in? Either way it’ll be a while before I come back as the lack of availability was very frustrating.

Thank you for your review. We apologize for any inconveniences you experienced during your visit. We have forwarded your concerns to our leadership team for review. We hope you will allow us the opportunity to welcome you back again soon!

Report response as inappropriateThank you. We appreciate your input.
This response is the subjective opinion of the management representative and not of TripAdvisor LLC
BassProBob
Calabasas, California
624
Reviewed March 27, 2021 via mobile
Clientele & Service Really Fell Off. I’m Dissatisfied With Caesars.

Just got to east coast with my sister and my cousin. I was delighted at first when we arrived Caesars AC. However, after this visit, I think I’m going to focus on more MLife properties instead of the El Dorado. First, I didn't get there till late and I was given a terrible room in the Centurion Tower. The room was disgusting. Towels were dirty as if someone wiped their rear end with it and simply hung it back on the rack. Went to the front desk and I asked for another room and the front desk lady was extremely rude. She told me that there were no more Centurion Rooms and only Forum Rooms with double beds or I had to pay for a suite which was the price was absolutely ridiculous. To make a long story short, the front desk woman told me to call housekeeping for new towels. Didn’t even bother (I will get to them later). The ventilation system was horrendous. With all the Covid and other possible respiratory ailments, why on earth is the HVAC very lousy? Brought some Lysol and I sprayed every faucet of the room. They were posting signage about cleaning windows during the week but housekeeping can’t properly clean a room.

I don’t know if people are coming to spend their income tax or stimulus checks, the type of people DO NOT match the customers of Caesars past. They are loud. They sit at the machines and don’t play machines. People banging on machines. They are screaming and hollering like children at a preschool. They harassed the hostess. By the way, there is a middle aged hostess of Hispanic descent that worked the night of 3/26 and she was absolutely rude (near the area of Lion Festival and Dragon’s Law on the 2nd Floor gaming area) and thought I had a fake ID. Lady. I’m 60 years old. I couldn’t see your ID and I should have contacted your manager. Your attitude and demeanor was appalling. Shame on you. I shouldn’t even have given you a tip for your horrible service. Security is non existent especially at night. Some whacked out lady playing Cashman near the Laurel Lounge got into a screaming contest with another hostess at approximately after 2am. Idiots can’t use a kiosk to order a drink?? Totally embarrassing and no one from security showed up to diffuse the incident. People eating goldfish crackers at machines. I guess homeless and underage loitering is allowed more often these days.

To make a long story short, I’m not going back to another Caesars property again until they take their real customers seriously. I heard AC Harrah’s is a dump too and they sold Bally’s too. The rooms suck. The service sucks. The people that do less and don’t contribute seem to get more perks and positive attention than the good people that just want a good entertaining time. I don’t come to the casino to see animals and idiots at the zoo or bums on the street corner.

Go to the Borgata if you’re in AC.

We apologize that we fell short and your experience did not meet your expectations due to the issues that you outlined in your post. We assure you that your complete satisfaction is our greatest concern. We have forwarded your comments to our Hotel operations team for their review so that we can ensure that our guests are always receiving the highest level of quality service you deserve.

Report response as inappropriateThank you. We appreciate your input.
This response is the subjective opinion of the management representative and not of TripAdvisor LLC
View more reviews
PreviousNext
1234…3071