CheapTickets
Expedia.com
ZenHotels.com
View all 8 deals
Prices are the average nightly price provided by our partners and may not include all taxes and fees. Taxes and fees that are shown are estimates only. Please see our partners for more details.
jeremy w
Edinburgh, United Kingdom
67104

Excellent apartments close to the sea

There are 12 spacious two-bedroom apartments and 3 one-bedroom apartments. They are in excellent condition with cooking facilities, WIFI and cable TV. The price is about the same as any of the hotels on the seafront, but you get much more for your money. The apartments are located in the town centre and opposite one of the main supermarkets. There are restaurants and cafes all around and, if that's your thing, they are only one block from the casino. There is a heated pool. Apartments on the second floor have balconies. During the winter months, you can see the whales playing in the bay opposite the apartments. With private secure parking and excellent and attentive staff, they are definitely the best option in Puerto Madryn.More

Show less
Room tip: The one bedroom apartments are less expensive and have two additional sofa beds in the living room.
See all 103 reviews
Nearby Hotels Hotels.com
View deal
Travelocity
Expedia.com
US$58
eDreams
US$102
View all 15 deals from US$58
724 reviews
2.9 km from Terrazas de Mar
We compared the lowest prices from 15 websites 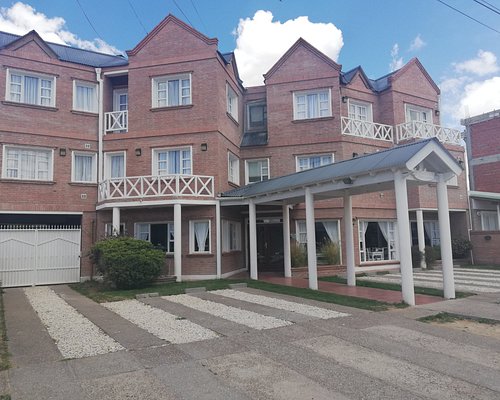 We stayed there the last Easter weekend. Rooms are comfortable, the location is close to almost everything in downtown. You have banks, restaurants, supermarket and the sea, everything near.
The rooms a very well equipped with full size refrigerator. The only thing a little outdated is the TV set. The swimming pool was at a good temperature and the free parking was ok.

This review is the subjective opinion of a TripAdvisor member and not of TripAdvisor LLC
fernando m
Fairfax, Virginia
16
Reviewed December 8, 2011
Unsafe

Last November 2011, I spent several days at Terrazas .
These were the problems:
1) Apartments are hot and there is no air conditioning. The only way to cool them enough in order to be able to sleep is by opening 2 windows.
The problem is in all of them one window (huge sliding window) opens to the common area. The common area can be easily accessed by thieves who climb through neighboring buildings.

2) One day I was woken up at 5am by a policeman who asked me if something had been stolen from my apartment because one man had been seen running away. One apartment had had property stolen by a thief that got in by the open window.
3) This was not the first time this has happened and probably will not be the last time either.
4) The internet exists only in name. They have a very cheap connection (probably through a telephone line) that is very seldom accessible. They blame it on the town’s connection, but if you go to any restaurant with WiFi, you can connect.
5) Towels are small and thin and need to be replaced
6) You are charged as soon as you arrive, so if you are not satisfied, there is nothing you can do because you already paid for the whole stay.
7) The only positive I can say is that the staff is really helpful, but there is so much they can do.
8) STAY AT TERRAZAS AT YOUR OWN RISK.

This review is the subjective opinion of a TripAdvisor member and not of TripAdvisor LLC
ClownFishJokesHaHa
Seattle, Washington
1210
Reviewed November 29, 2011
Basic hotel, but no breakfast

It's an apartment, with kitchen, dining room, living room. WiFi is spotty to frustrating to none. No front desk/receptionist, so it was hard to find someone to ask about the facility. We checked-in around midnight, but someone was there to open the gate and gave us the keys. No breakfast, but there's a coffee shop around the corner. Location is good, close to restaurants. Room itself is away from the street, therefore quiet. It's good for the price, but will probably not stay here again. Our tours picked us up at 7:30am. We hurried to the corner cafe, which opened at 7am and service was slow. If breakfast is not your primary concern, then this is a good hotel for basic stay.

This review is the subjective opinion of a TripAdvisor member and not of TripAdvisor LLC
kareny13
Tempe, Arizona
247181
Reviewed October 31, 2011
Bit overpriced for what you get

Apartment style with good amount of space; kitchenette; in a convenient location one block away from the tourist office/ocean and carrefour market across the street, free wifi, and have hot water in an instant!! But overpriced and needs attention.   It's a condo apartment building. Apparently there is concierge from 8am-10pm, but where they are who knows, since there is no "office" or "desk" anywhere.  In apartment: no phone(so any messages from tours or what not, means someone knocking on your door to deliver the message in Spanish).  Hotel staff knocked on my door at 9pm on 2nd of my 5th night asking for my full payment, which btw is cash, which I was aware of but to pop up for payment on the 2nd night.   Air condition is broken (good thing there was a fan in the bedroom), as is the tv, which the volume just randomly increases..which you can't ask anyone about cuz you don't know where they are..though you can email them, but obviously not very convenient.  Get one small towel that is a bit larger than a hand towel and threadbare.   Big balcony patio..huge..but nothing out the..not one chair nor table, so doesn't allow one to take advantage of.Of course the pics on the website are amazing, but in reality, very used and need a lot of touching up.  Very very sparse apartment...  Staff are nice, Schirley is especially, but where are they?  FYI only Spanish spoken here. I get its apartment style, which is fine..but have things in there working and worth the price, would be fine at the right rate. Simple things would help so much: get new towels and larger than what my gym has,  provide tissues, a clock, soap dish so it doesn't get stuck on the counter, replace the kitchen sponge on a regular basis, put a chair/table but on the balcony..... I paid AR 450/night, which I had 3 different locals so very appalled at that amount..... Fine for a B&B level pricing but not over US$100.... overpriced for what you get

This review is the subjective opinion of a TripAdvisor member and not of TripAdvisor LLC
hdc900
London, United Kingdom
2318
Reviewed May 27, 2011
Excellent location, price and faculities

We stayed at Terrazas del Mar in very low season and we had a great experience. We travel with a 4 months old baby and the apart hotel idea was more appealing than staying in a hotel. Terrazas is actually like renting out a fully equipped flat with swimming pool.
The location in in the heart of Puerto Madryn with easy access to restaurant, shopping and just two minutes away from the beach.