US$40
View Deal
Free cancellation until 21-03-04
Reserve now, pay at stay
ZenHotels.com
Prices are the average nightly price provided by our partners and may not include all taxes and fees. Taxes and fees that are shown are estimates only. Please see our partners for more details.
Robert R
Sosua, Dominican Republic
3413

We are an English speaking family with some bad Spanish. Not much English at this hotel or in this part of the country for that matter. So with this mindset we were treated very well at this place. The price is very cheap and the room with bunk beds and a queen bed was great for our family. We were the only foreigners at the time we stayed. So if your not prepared for that, this is not the place for you. We used this hotel as the starting point for road trip to the Larimar mines and Bahia de las aguilas adventure. Perfect starting point. Hotel is like a big house. large wall around the entire area and no view of the beach or access to the beach. Breakfast was included and got us on our way. Air conditioner and Wifi were great. Large pool was nice to cool off in the evening. Spanish (or bad Spanish) required.More 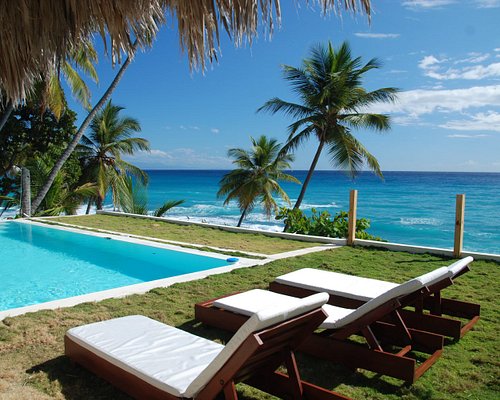 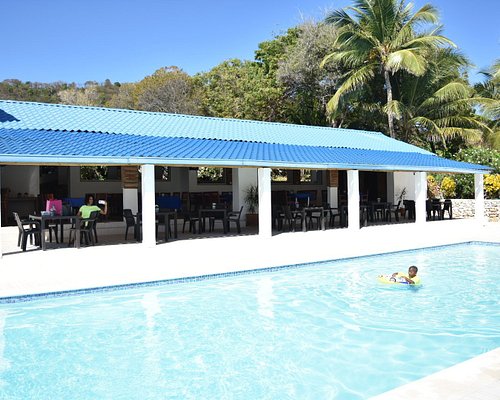 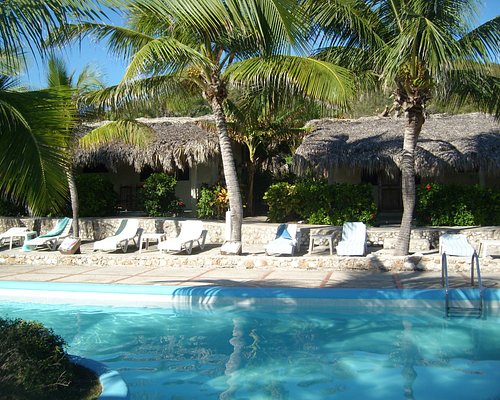 Strange hotel, not a good experience!

First up, it's in a dangerous area so you can't leave the complex unless you have a security escort, even to take some photos of the beach 5 minutes walk down the road. The beaches nearby are very dirty and you have no access to the beach from the hotel as it is gated off for security.

I get the impression that, because we had booked only 24 hours before on booking.com, the hotel was not ready for our arrival (perhaps they hadn't seen the booking?). Our room wasn't clean enough (hair on the bed, floor and in the shower plug). However, the staff serviced our room on the second day to a much higher standard and was much cleaner than when we first arrived.

The air conditioning unit didn't cool the room down properly on the first night, which made for a very hot and uncomfortable night (note, there was no problem with air con on the second night). There was also a local family that seemed to know the hotel staff who were quite noisy, especially on the first night partying.

The hotel has an unprofessional vibe about it. No one in the hotel wears uniform, which is odd, so you don't really know who to speak to. It feels like there are a lot of people around but they are not paying guests (do they work there? Don't know! No uniform, name tags etc) We also had problems with language, which is surprising for an establishment supposedly catering to tourists. We speak a small amount of Spanish and all of the staff bar one person speaks very little English, which was difficult at times. I'm not the kind of person who expects all locals to speak fluent English, however, the basics would be helpful. We left to go on a tour one day and the staff kept approaching us asking if we want a taxi. "No thank you, we are getting picked up by our tour company" we said, to which they had no idea what tour meant and kept saying "taxi? taxi?". This went on for about 10 minutes whilst we waited for our tour company to pick us up.

Also, we ordered a meal on the first night only to be told they barely had any supplies. No beer (they managed to find 1 bottle in the end), only chicken/fish, lettuce, tomato and onion. And then had the audacity to charge us nearly $10US each for the food (plus beer!) for what essentially was a very basic chicken salad. We felt so ripped off that we sat in our room and ate Nutella sandwiches for dinner on the second night!

We were also told that breakfast starts at 8:30am, but our tour company was picking us up at 7:15am, so no breakfast for us! However, when we were waiting to get picked up the staff kept asking us if we wanted breakfast, which was nice, but would have been good to know this before-hand. As I mentioned above, this is all very difficult to communicate when there is a language barrier.

We ended up leaving a day early as we really did not feel comfortable in this hotel. It has the potential to be a good hotel as the building and pool area are very nice, but at the moment, it lacks even the basics to be even a 2 star hotel. I'm just frustrated that we wasted our money here.

On the plus side the pool area was nice. The pool was clean and inviting as were the sun loungers and umbrella's. The veranda where breakfast/dinner is served was also very nice.

This review is the subjective opinion of a TripAdvisor member and not of TripAdvisor LLC
Jean G
Bromont, Canada
212
Reviewed May 22, 2016
New owners , less services

I been there several times over the last few years and and returned there this month. They had very limited service, the rooms were nice but the TV in both rooms did not have cable service, the bar had no beer to serve us and we could not have diner outside because of all the mosquitos. The ventilator was not working, we had to eat in our rooms. So its not what it was before. Seems like they are not really improving but regressing. But the rooms were clean.

This review is the subjective opinion of a TripAdvisor member and not of TripAdvisor LLC
robertomatos01
New York City, New York
42
Reviewed May 6, 2016
Lovely

Quick ride from the city, friendly staff and delicious food. Had a wonderful experience, definitively would recommend. You ask for their mojitos!

Warm, comfortable and quiet, feel like a home away from home.

This review is the subjective opinion of a TripAdvisor member and not of TripAdvisor LLC
DocJohannes
Oslo, Norway
5215
Reviewed July 23, 2015
Lovely place in all ways

Saladilla Hotel is situated just a few minutes drive from Barahona (not walking distance). It has a nice beach (although it was seaweed-time when we were there). The hotel feels like a home, but with all the amenities you could wish for. We had a really nice time, and were very well taken care of, both concerning safety and service.
It´s a really nice place to relax, be sure to watch the sunrise with some yoga on the front yard, or just lay under the trees by the beach listening to the waves.
Also, the nicest beaches in the Caribbean, and Lake Enriquillo nearby.

This review is the subjective opinion of a TripAdvisor member and not of TripAdvisor LLC
917danl
Houston, Texas
4144
Reviewed May 30, 2015
Nice hotel,great views good resturant

Friendly staff and nice spacious rooms, good bed and linens, we had an ocean view, cost $69 plus tax. The hotel was a private residence converted to a hotel, nicely done, large clean pool and pretty views of the bay and mountains from the entire property. This part of the island is very dry so a good place to go in the wet season. The day we were there my DR boyfriend and American friend traveled from Santo Domingo here for one night (Sunday) to get out of the city. I would call this hotel a family hotel and gay friendly as the staff was nice to us. We had lunch and met the chief. I had cordon blue which was made fresh and was delicious, my bf had beef which was tender both came with a mushroom sauce and a side of either plantain or French fries. My friend had fresh fried fish which we very good. The chicken and beef were 450 pesos each. Breakfast was free, mostly eggs and toast with coffee, juice and a fruit plate. I enjoyed it except for the juice, as it had a strange taste. One drawback for us was the city too far to walk to and cost 200 -300 pasos. There was a nice 5-10 mph breeze the whole time, which I liked. Also 500 yards to the left and over a hill there is a local beach which was busy. We ate dinner at a local diner in Barahona Sun night. I was surprised by how crowed and rowdy it was for a Sunday night. We made some friends at the beach and met up with them for dinner and played pool for a few hours. This part of the island does not have many tourist and found everyone to be friendly.