US$125
US$83
View deal
SAVE US$42
HolidayInn.comUS$97
Hotels.comUS$97
StayForLongUS$125
View all 17 deals
Prices are the average nightly price provided by our partners and may not include all taxes and fees. Taxes and fees that are shown are estimates only. Please see our partners for more details.
uberjew
52

my husband and i dont go many places now. we used to when our family and we were younger. but now we steal away for a night here or there.
when we do so, and wherever we go we stay at choice hotels because of our credit card and points.
last weekend we went to the garden show in hartford and rather than come home to the usual, we stayed at this hotel.
we do this whenever we can and have staid at a variety of comfort suites . some are really yucky, some are fine -- but every now and then we hit a gem! one of those 'who would have think its'.
this was that kind of place. yes -- it was boxy and lacked originality, but it was really clean and that counts for more. the pools was perfect. the breakfast was clean and fresh and there was enough. the parking was well lit -- that really matters! the people wee helpful and friendly.
our room was BIG and clean and light and comfortable. the room decor is dated, but it clean. the bathroom was spacious and the shower was very nice.
our check in/check out went smoothlyMore

Show less
Room tip: note that the room given to folks using points is not handi-capped accessible, if you need that,know that
See all 153 reviews
Nearby Hotels 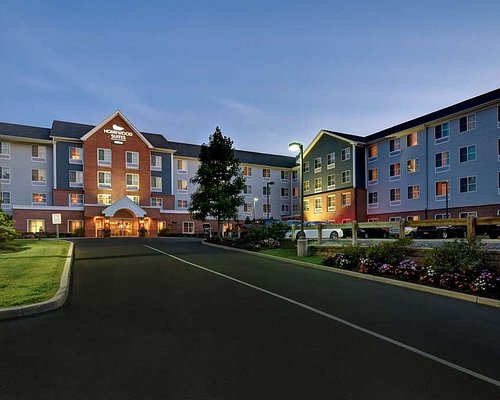 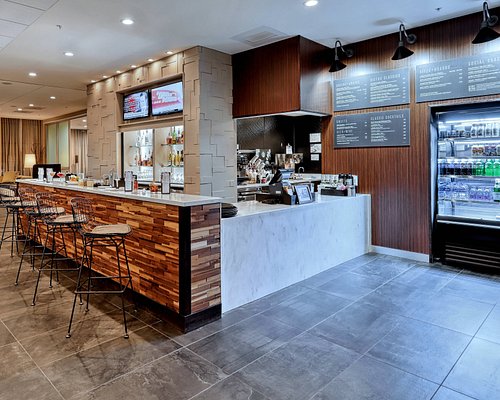 Courtyard Southington
US$135
Booking.com
View deal
Courtyard
US$135
Priceline
US$135
Hotels.com
US$135
View all 18 deals from US$135
26 reviews
6.3 km from Comfort Suites Southington - Cheshire

We've stayed at this property several times and its convenient location right by I-84 is great. While the room was clean and the bed comfortable, the property in general is in need of some refurbishing. We had a king suite, and it can be called a suite in name only, because there was so little room on one side of the bed (by the window) that my trim husband had to shimmy in and out sideways. There's really no reason or excuse for this because the "living room" area, separated by the "bedroom" area by a half wall, is quite large. That half wall could be moved without crowding the seating area, leaving plenty of space to comfortably move around the bed. Maybe this was once a queen suite that was turned into a king? I don't know, but it was lame. The "living room" had only one side table and no ottoman, so one of us had nowhere to place a drink. The tub spigot leaked all the time. After our first night, I wrote the room attendant a note asking that it be fixed...and it actually got worse. The irony is that there is a posted note in the room saying that in an effort to conserve water, towels and linens are only changed after 3 days unless otherwise requested...and water leaks like this one have got to be driving up the water bill significantly. We would stay here again - but we would first inspect the room to be sure of adequate space in which to move around the bed. Regarding the "noise level" rating of "loud," that was actually variable. We didn't hear interstate traffic, but on weekdays Knotter Drive has a great deal of semi truck traffic beginning around 4:00 a.m. - and that WAS loud.

This review is the subjective opinion of a TripAdvisor member and not of TripAdvisor LLC
MDFreqTvlr
Columbia, Maryland
370201
Reviewed October 10, 2019 via mobile
Good value, nothing fancy

If you are looking to spend a night in a clean comfortable room at a reasonable rate then the Comfort Suites works well. The room was roomy enough with modern elements and the price was good. It is very convenient to the interstates. Note that other than fast food, there are no restaurants within walking distance.

This review is the subjective opinion of a TripAdvisor member and not of TripAdvisor LLC
Graham S
Yateley, United Kingdom
3934
Reviewed October 5, 2019
Bewrae - the hotel name is misleading - not necessarily a suite

2 big issues with this place -

Firstly, although the name of the hotel is Comfort Suites, we did not have a suite - our room was slightly larger than the norm but did not have the separated section with a settee or similar as in other Comfort Suites we have stayed in. We had one armchair and one office chair - not much different to many other cheaper motels which do not claim to be suites. Note - this particular hotel is not called "Comfort Inn and Suites" which would signify that only some rooms are suites - it is called Comfort Suites. I pointed this out to the receptionist when we checked out, but she just told me (with a fixed grin) that my booking was for 2 queens, nit a 2 queen suite. When I told her that based on the hotel name and information on website I was expecting that all rooms were suites, she said that because it has a fridge and a microwave they classify it as a suite - what sheer nonsense.

The second very big issue was breakfast. We went down at 7pm (opening time), but the whole area was overrun with youngsters who were obviously all in a large group on some trip and we could not get a table. So we returned to our room and came down again half an hour later, but similar issues - could still not find a seat. So we again finally coming down at 9am only to find that another very large group had taken over most of the area and the remaining tables were also taken. Eventually we managed to beg a couple of chairs from the group and had our breakfast, which we could not then enjoy. Just to aggravate the issue, the presented buffet was not so good as some other Comfort Suites we stayed in and this was made worse because not all was now available. I also mentioned all of this to the smiling receptionist who brushed it aside by saying that the hotel is full and they cannot ask other guests to leave the area in order for us to eat. My response that the issue is that the breakfast area is far to small was totally ignored by simply giving me that fixed smile.

Less major issues were that the bathroom vent made a continuous noise all night and that the bath tap kept dripping although fully turned off. The response to this was "did I inform anyone at reception?" (again with that smile). Of course I did not, the issues really came to light as we went to bed and we would not want a plumber to come in then (not that they would do) and I also knew that there were very limited spare rooms as when we checked in, a lady in front was asking for a room change due to some issue with the toilet not flushing. - another symptom of issues at the hotel. But I did note that she was told that there were only a couple of spare rooms available at that time - and as the smiling receptionist herself told me - they were eventually full. So nothing would have happened if I had reported the issues. I did however point out that within 10 minutes of checking into the room , I had reported that the bank of power sockets on the table was not working - only to be told that it is a common problem with many rooms having these power banks blown. That was not really a problem for us because we only needed a couple and there were others - but again this is symptomatic of the hotel attitude.

But maybe the worse thing of all was the receptionist's attitude. Not once did she apologise for any of the issues. All I received were sarcastic replies (admitedly trying to defend the hotel) given with a very large smile that was more scornful than meaningful.

Fortunately we did not have similar problems with other Comfort Suites that we stayed at through our month tour of USA.

Also I must say that the beds were fairly comfortable and the room generally clean.

But for the reasons given above, I cannot recommend anyone to stay here - avoid.

This review is the subjective opinion of a TripAdvisor member and not of TripAdvisor LLC
cally3315
Lanesboro, Massachusetts
1114
Reviewed July 29, 2019 via mobile
One night stay from lake compunce

Family and I stayed here for 1 night after visiting lake compunce before our next adventure. Hotel Was clean and comfortable. Breakfast and a good selection and was being replenished when things were low. Pool was small and would have been nice to have a hot tub. Would stay again

This review is the subjective opinion of a TripAdvisor member and not of TripAdvisor LLC
patrick_tuckahhh
Georgia
8368
Reviewed June 10, 2019 via mobile
Ehhh. Dated. Needs a total refresh.

This hotel is not really that bad. The bed was clean. We stay at around 20 Comfort hotels every summer. This has been the worst one. The hotel was dated and was not in a great location. WiFi did not work AT ALL. Furniture and carpet looked abused. Breakfast was bad. Shower mechanism was broken. Hotel just needs an in-depth renovation.