Best Western Allatoona Inn & Suites
Lowest prices for your stay
Lock in the lowest price from these sites
US$77
US$64
Reserve now, pay at stay
View deal
FindHotelUS$77
PricelineUS$64
BestWestern.comUS$64
Hotels.comUS$64
Expedia.comUS$64
eDreamsUS$64
View all 20 deals
Prices are the average nightly price provided by our partners and may not include all taxes and fees. Taxes and fees that are shown are estimates only. Please see our partners for more details.
BobB329
Boulder, Colorado
22096

My stay was for one night. No lobby access was allowed and there is a check in window.
I requested a quiet room away from the smoking rooms. I did not detect cigarette smoke during my stay. As to quiet - there is a freeway on one side of the building and a highway on the other. Bring ear plugs if you’re a light sleeper.
My room appeared to be recently renovated and was in good condition. I could not log onto the wifi from my room, but was able to grab a weak signal by standing on the balcony of room 306.
There is a busy commercial area nearby.
My opinion was - decent value for the price.More

Your review and rating of our hotel mean a lot to us, and we thank you for taking the time to share this experience. We want you to know that your feedback and description of your experience at our hotel is of the utmost importance to us. We hope to see you again when your travels bring you back to the area!

Report response as inappropriateThank you. We appreciate your input.
This response is the subjective opinion of the management representative and not of TripAdvisor LLC
See all 550 reviews
Nearby Hotels

Hilton Garden Inn Cartersville
US$140
US$129
Booking.com
View deal
Free cancellation
GardenInn.com
US$129
Priceline
US$129
FindHotel
US$140
View all 19 deals from US$129
731 reviews
5.3 km from Best Western Allatoona Inn & Suites
We compared the lowest prices from 19 websites 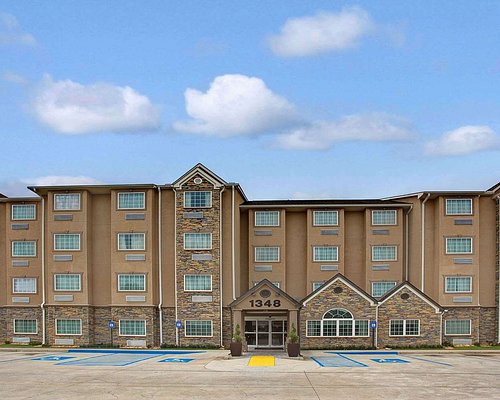 FindHotel
View deal
Booking.com
US$80
Priceline
US$80
ZenHotels.com
US$91
View all 20 deals from US$80
203 reviews
8.4 km from Best Western Allatoona Inn & Suites
We compared the lowest prices from 20 websites
Breakfast included
Tru by Hilton Cartersville
US$129

My first complaint is not receiving the total amount of reward points per stay/booking.
Secondly, I was told that if I find a room with Priceline at a discounted rated, Best Western Allatoona Inn & Suites would also match the price. THIS IS A BOLD LIE!!!
Once you look at your credit card receipt online, you will see that you have been actually over-charges multiple fees just like I was. I have made several disputes on my credit card where I have been over charged by this hotel.
Besize price gouging, the hotel is really clean.

Thank you for sharing your experience, and I am so sorry to learn that we failed to meet your expectations of quality service and accommodations. I am so sorry for the misunderstanding and inconvenience that you experienced during your most recent stay. While I understand your frustration, I assure you that this mishap was purely unintentional and resulted from a genuine misunderstanding. I hope you will forgive this error and the service that did not meet your expectations and that you will someday return to see how we have grown through guest feedback.


Report response as inappropriateThank you. We appreciate your input.
This response is the subjective opinion of the management representative and not of TripAdvisor LLC
LPulliam6000
Berea, Kentucky
1
Reviewed March 23, 2020
The best hotel my family has seen.

Out of all of the hotels I've stayed in over the years, this is the only one where I could smell the cleanliness of the room. The staff was helpful and friendly, and we were so grateful for their kindness.

Review collected in partnership with Best Western
This business uses tools provided by Tripadvisor (or one of its official Review Collection Partners) to encourage and collect guest reviews, including this one.
Ask LPulliam6000 about Best Western Allatoona Inn & Suites
Thank LPulliam6000

It means a lot to us that you’ve taken the time to share many positive features of your most recent stay with us. Your five star review is greatly appreciated. Thank you for your compliments to our staff and high standards of cleanliness and hospitality. We thank you so much for your business and we look forward to your next visit.﻿

Report response as inappropriateThank you. We appreciate your input.
This response is the subjective opinion of the management representative and not of TripAdvisor LLC
Becky M
Illinois
81
Reviewed March 3, 2020
Nice clean room for a great value!

My husband and I were driving home from Florida back to Illinois. After getting through the chaotic traffic in Atlanta, we were ready to stop for the night. We usually avoid motel type rooms if possible, but we were tired and really didn't pay attention until after we checked in that this was a motel (doors on the exterior)of the building)....and we were on the back side which was where the interstate traffic was roaring past. Despite my initial uncertainty, I was pleasantly surprised to find what appeared to be a recently remodeled, clean room. There were a couple of minor maintenance issues but nothing that concerned us or affected our stay. We were able to drown out most of the interstate noise by running the fan on the thermostat. Breakfast was provided in the lobby the next morning with both hot and cold choices, including my favorite, a waffle maker! The lobby and breakfast area were also clean and the staff was friendly and helpful. Overall, it was a nice , reasonably priced choice for what we needed--a place to sleep and eat--before we got back on the road early the next morning.

Room tip: Rooms facing the front of the hotel may be quieter since they are facing away from the interstate.
Ask Becky M about Best Western Allatoona Inn & Suites
Thank Becky M

Thank you for letting us know how satisfied you are with our services and accommodations. It is heartwarming to hear of how our efforts to impress you with our hospitality, comfort, and convenience have been successful. We are very happy to hear that you found no difficulties when staying with us and our amenities lived up to your expectations. Once again thank you so much for your high rating. We look forward to serving you again.

Report response as inappropriateThank you. We appreciate your input.
This response is the subjective opinion of the management representative and not of TripAdvisor LLC
TaraR5560
Birmingham
64
Reviewed February 26, 2020
Great Hotel Reasonsbly Priced

Excellent hotel for the money. Front desk over the top nice. Great experience. Would stay again. Will say was not sure where to turn in parking lot, entrance was not clear. Entered through gas station drive next door.

Review collected in partnership with Best Western
This business uses tools provided by Tripadvisor (or one of its official Review Collection Partners) to encourage and collect guest reviews, including this one.
Ask TaraR5560 about Best Western Allatoona Inn & Suites
Thank TaraR5560

Thanks for your kind and heartwarming review. Our team works hard to ensure a satisfying experience for all our guests and we are pleased to hear that yours was a satisfying stay. We also definitely work on your observation and you can have a better experience next time. We hope to see you again soon.

Report response as inappropriateThank you. We appreciate your input.
This response is the subjective opinion of the management representative and not of TripAdvisor LLC
carriegsoulliere
1
Reviewed February 12, 2020
Clean, good value

Room was spotless, bed was not horrible, better than expected for the price, breakfast was good. Quiet, minus some freeway background noise. Only problem was manager called me for payment after check out when I had already paid, but we sorted it out.

Review collected in partnership with Best Western
This business uses tools provided by Tripadvisor (or one of its official Review Collection Partners) to encourage and collect guest reviews, including this one.
Ask carriegsoulliere about Best Western Allatoona Inn & Suites
Thank carriegsoulliere

It is wonderful to hear that you enjoyed your stay and that you have rated our hospitality and accommodations so highly. We are happy to have met your expectations with our friendly services, great breakfast and the cleanliness of our guest rooms. We will also be working on your observations regarding the payment process. And know that actions shall be taken to improve everything on priority. We hope to impress you during another visit with every level of service.

Report response as inappropriateThank you. We appreciate your input.
This response is the subjective opinion of the management representative and not of TripAdvisor LLC
View more reviews
PreviousNext
1234…92