If everything else is booked this will work - Review of Super 8 by Wyndham Fairview Heights-St. Louis

US$60
View deal
Booking.comUS$60
Expedia.comUS$60
TripadvisorUS$60
Hotels.com
Travelocity
Orbitz.com
View all 13 deals
Prices are the average nightly price provided by our partners and may not include all taxes and fees. Taxes and fees that are shown are estimates only. Please see our partners for more details.
Rich R
Duluth, MN
2416

If everything else is booked this will work

This hotel isn't terrible, but it's pretty beat up and the air quality leaves a lot to be desired. The elevator reeks of cigarette smoke and the entire hotel is stuffy. Our room had a fan in the bathroom, but it didn't suck any air out so we had to leave the bathroom door opened if we wanted to get the moisture out. There was mold on the ceiling and the drywall patch was pretty rough (see photo). There were two lamps with dual plugs, which is nice, but the plug holes in one of them were so loose they didn't work at all. There is torn carpet throughout the place and the reception area has a bunch of junk laying all over the place. The people who work there were nice. The breakfast was decent except for the peanut butter. The packets had completely separated into pure peanut oil and dry/hard peanut butter. I had some on our first morning (not an issue) and thew away two packets before just giving up on day two. We were originally scheduled for 4 days and our plans changed so we wanted to leave two days early. They were accommodating and that went smoothly. My understanding is that a new manager just started, so hopefully conditions will improve in the near future. As of today: September 5, 2019, I would only stay there if I really had to. (location is good)More 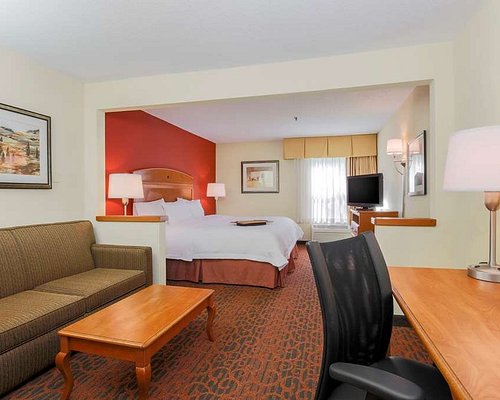 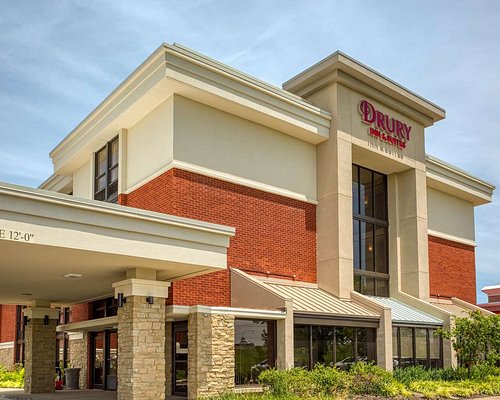 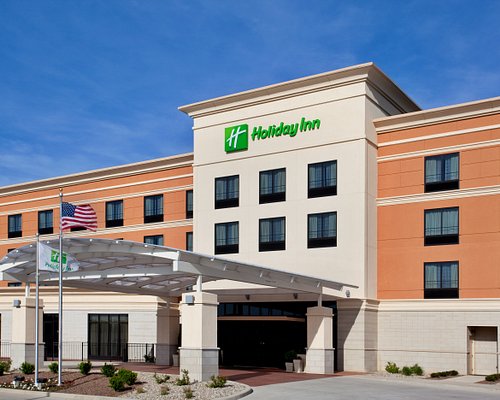 Hampton.com
View deal
Tripadvisor
US$143
Hotels.com
Expedia.com
US$143
View all 14 deals from US$143
443 reviews
0.6 km from Super 8 by Wyndham Fairview Heights-St. Louis

Bad stay ! staff doesn't listen to guests complaints but hotel is in a excellent location plenty of restaurants and shopping within walking distance. Rooms are large could use updating . Breakfast is ok not anything special but it is a quick and on the go breakfast.

Review collected in partnership with this hotel
This business uses tools provided by Tripadvisor (or one of its official Review Collection Partners) to encourage and collect guest reviews, including this one.
Ask donnie l about Super 8 by Wyndham Fairview Heights-St. Louis
Thank donnie l

This review is the subjective opinion of a Tripadvisor member and not of TripAdvisor LLC.
Cruiser00596903577
1
Reviewed August 10, 2019
Ok, but probably would not stay again

Room was very aged. Breakfast was not really breakfast unless you like a bagel or cereal.
Service staff was very friendly.
For the price I would probably spend more to stay somewhere else.
Location is great within 15 minutes from St.Louis and alot of shopping and restaurants nearby

Review collected in partnership with this hotel
This business uses tools provided by Tripadvisor (or one of its official Review Collection Partners) to encourage and collect guest reviews, including this one.
Ask Cruiser00596903577 about Super 8 by Wyndham Fairview Heights-St. Louis
Thank Cruiser00596903577

This review is the subjective opinion of a Tripadvisor member and not of TripAdvisor LLC.
tnsilvertip
South Pittsburg
13070
Reviewed August 4, 2019
Great place to stop. Handy to interstate.

One of the best Super 8 motels we have stayed in. Clean with pleasant and helpful staff and their breakfast starts at 5 AM. The room was large and clean with most of the common room perks, missing only an in-room safe. The mini-fridge's freezer section actually froze some cooler ice packs. The WI-FI had a strong signal and was easy to login to and use. The armchair was actually a rocker recliner. The air conditioner cooled the room easily and quietly. There were USB charging ports on the table lamps. The bed was very comfortable, best of our eight day trip, and there were several types of coffee grounds for the coffee maker. Parking was adequate and there were several eating places within walking distance.

This review is the subjective opinion of a Tripadvisor member and not of TripAdvisor LLC.
BCNDWorld
minneapolis
17947
Reviewed July 29, 2019
Nice basic super 8 in a good area. No issues

Sort of your typical Super 8. Breakfast was good, not great but better than some I've had. Parking was convenient as was getting to the hotel from the highway. Super convenient. Service was whatever. Place was very noisy but I think I just picked a bad couple of days and there was a party out back, where my room was. Reasonable price. I would stay there again. It's a great area if you like to eat out. Lots of choices.

Review collected in partnership with this hotel
This business uses tools provided by Tripadvisor (or one of its official Review Collection Partners) to encourage and collect guest reviews, including this one.
Ask BCNDWorld about Super 8 by Wyndham Fairview Heights-St. Louis
Thank BCNDWorld

This review is the subjective opinion of a Tripadvisor member and not of TripAdvisor LLC.
Sara S
3
Reviewed July 29, 2019
Horrible

We got to the hotel at night and immediately smelt strong of smoke. Then entered the room to find poo and pee in the toilet, hair all over the bathroom/tub, mold/mildew on pillows, mildew, hair, and black specks on the bedding, uncomfortable mattress, crumbs all over the room and smelt sticky/mildewy. SAVE YOUR MONEY. We ended up leaving and going to a hotel nearby. Would give 0 stars if I could!

This review is the subjective opinion of a Tripadvisor member and not of TripAdvisor LLC.
View more reviews
PreviousNext
1…567…