Anniversary Weekenend Away - Review of The Brunswick Hotel

The Brunswick Hotel
Lock in the lowest price from these sites

Expedia.com
Booking.com
Hotels.com
View all 15 deals
Prices are the average nightly price provided by our partners and may not include all taxes and fees. Taxes and fees that are shown are estimates only. Please see our partners for more details.
caterinecliffide
South Portland, Maine
2

We wanted to stay local for our anniversary so we chose this location due to its dog friendly atmosphere and proximity to areas we wished to visit. The hotel itself is very nice. Our room was not cleaned well. Upon arrival, we found a moldy banana and takeout in our fridge, a used cup in the shower and our dog kept finding food on the floor. Outside of this, we had a pleasant stay. There are literally no extras in the rooms right now, including coat hangars which was a bit of a pain. We had filled out a form prior to arriving on what extras we would like in there but nothing was in the room when we arrived. Bed was super comfortable. More

Show less
Review collected in partnership with this hotel
This business uses tools provided by Tripadvisor (or one of its official Review Collection Partners) to encourage and collect guest reviews, including this one.
See all 418 reviews
Nearby Hotels Breakfast included
Best Western Plus Brunswick Bath
US$159
US$120
Booking.com
View deal
Free cancellation
Reserve now, pay at stay
BestWestern.com
US$120
Priceline
US$120
FindHotel
US$159
View all 20 deals from US$120
590 reviews
4.5 km from The Brunswick Hotel

Taking safety measures
We compared the lowest prices from 20 websites 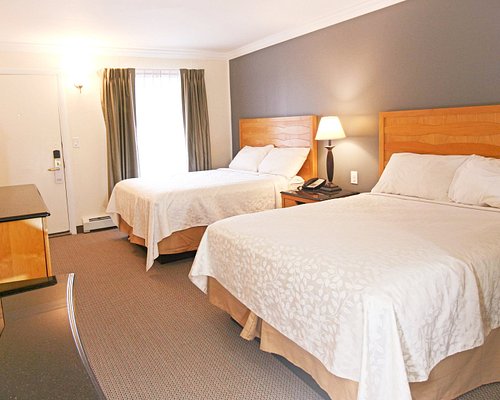 Beautiful and well kept hotel. Walking distance to downtown,historic Brunswick. Great shops and a winderful farmer’s market on the green. Hotel is clean as a whistle and very quiet! Due to COVID the restaurant and bar were closed. I would definitely stay here again. The front deak staff were very friendly, helpful and professional. It is also within walking distance to Bowdoin College

This review is the subjective opinion of a TripAdvisor member and not of TripAdvisor LLC
mclaughry
13
Reviewed August 1, 2020
Caveat Emptor (Let the buyer beware)!

I booked two rooms in this establishment in anticipation of attending a nearby wedding which was to have taken place in mid-August. Because of COVID19, I first had to first downsize my reservation to one room and, ultimately, cancel my remaining reservation. The first cancellation was in late June, and the second was in early July. To date, neither have been refunded. This establishment doesn't respond to emails in a timely manner, and I could not find a mechanism for cancelling efficiently on their website. When I have called, I have been told that it takes up to 30 days for a refund. However, but 30-days has come and gone, at least for the first cancellation, and no refund has been forth-coming.

Room tip: Avoid, if there is any possibility you will have to cancel.
Ask mclaughry about The Brunswick Hotel
3  Thank mclaughry

This review is the subjective opinion of a TripAdvisor member and not of TripAdvisor LLC
sailmaine207
Harpswell, Maine
151
Reviewed May 25, 2020 via mobile
Nice

Very fine hotel. Staff was attentive, rooms were clean, and location was great. They take pride in running a hotel and it shows. We will stay here again.

They have good amenities and are close to all that Brunswick as to offer.

This review is the subjective opinion of a TripAdvisor member and not of TripAdvisor LLC
CABEACHGIRL2014
Amelia Island, Florida
122
Reviewed March 15, 2020
Upscale and good food but needs some details.....

Food is great. Just be prepared for no coffee in your room. No room service. Hike down to lobby bar for Ice and coffee in the AM . In my case, in my pajamas which is not very comfortable for me or the people looking at my fluorescent kangaroo pajamas.

Room tip: Room was next to busy road but once shut window was very quiet. Not necessary to be on backside of hotel for quiet.
Review collected in partnership with this hotel
This business uses tools provided by Tripadvisor (or one of its official Review Collection Partners) to encourage and collect guest reviews, including this one.
Ask CABEACHGIRL2014 about The Brunswick Hotel
Thank CABEACHGIRL2014

This review is the subjective opinion of a TripAdvisor member and not of TripAdvisor LLC
POACA
Maine
8325
Reviewed March 13, 2020
Convenient location, good food, unexceptional lodgings

This hotel is on the corner of the Bowdoin campus and a stone's throw from the Amtrak station, so you couldn't ask for anything more in terms of location. The hotel is clean and the staff are well trained. There are not many amenities, and the rooms are simple. Rooms are a touch "used" lookings -- our bathroom floor was stained and the bathroom door needed to be re-hung. The Noble pub serves well-prepared foods and good spirits, literally and figuratively. Like most hotels these days, the pillows were sub-par but the mattress was better than average.

Room tip: Ask for room on the Noble St. side.
Ask POACA about The Brunswick Hotel
Thank POACA