US$79
View deal
Expedia.comUS$79
TravelocityUS$79
FindHotelUS$79
View all 12 deals
Prices are the average nightly price provided by our partners and may not include all taxes and fees. Taxes and fees that are shown are estimates only. Please see our partners for more details.
suepF2025EO
Hudson River Valley, New York
25464

When you step inside, WOW, takes you back to 1900's. The woodwork is amazing. Old phone booths with history displays inside them. A grand staircase!! Wide hallways, warm and welcoming owners. Such a lovely place. Stayed in the Moroccan room, very nice. Nice bathroom, room was clean, neat and beautifully decorated. Comfy bed, window unit ac. Sat on the balcony and enjoyed the view. Coffee and tea available in the morning downstairs. No tv's in room which is nice, free wifi and parking. Walking distance to shops and stores.More

Thank you so much for staying with us and for taking the time to write a review. We are very glad that you liked the hotel and the room. It sounds as if you had Room 216. It is one of my favorites as well with the unique lamps and headboard. Please feel free to request that room the next time you reserve and we will get it for you if available. Again, thank you so much for your business and we hope to see you soon.

Report response as inappropriateThank you. We appreciate your input.
This response is the subjective opinion of the management representative and not of TripAdvisor LLC
See all 249 reviews
Nearby Hotels 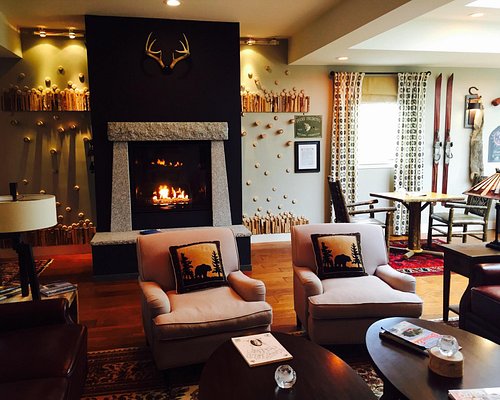 Expedia.com
View deal
Booking.com
US$169
Priceline
US$169
Hotels.com
US$169
View all 12 deals from US$169
51 reviews
0.4 km from Herbert Grand Hotel
We compared the lowest prices from 12 websites No TV ,, no heat ,, you want heat here is an electric heater. ripped towels really? going skiing and need to stay well this is it. A bed for your head. I would hate to think heat problem would be like on a zero night.

Thank you for staying with us and for taking the time to leave a review. We removed the televisions from the rooms several years ago and opted not to install new televisions when we renovated in 2016 for several reasons. First, we wanted to preserve as much of a "period" feel as possible in the rooms and there was no where to hide a television that didn't seem awkward. Second, we have high speed WiFi in all of the rooms and many people simply prefer to stream video rather than watch television stations. Third, we have a large television in the lobby with cushy couches, a cozy fireplace and a billiards table for our guests to enjoy. With respect to the heat, I am not aware of anytime during the year when there was no heat in the building. From the sounds of it, you stayed on a night when the temperature was chilly but no freezing, so the thermostat went on and off as the building reached the 73 degree desired temperature. Further, it sounds like you were provided with a personal heater just for you because the room felt chilly. Thus, there really wasn't a heat problem as you describe. Merely, the building's heat was not as warm as you liked it and our team did the right thing and got you a personal heater to warm up.

Report response as inappropriateThank you. We appreciate your input.
This response is the subjective opinion of the management representative and not of TripAdvisor LLC
lauradee1
boston
2113
Reviewed April 9, 2018
Beautiful Hotel

The hotel is beautiful and old, and the owners really care about their building. However, during check the owner's mother informed us that the rugs were newly installed and to be very careful about not spilling on them, which did not feel particularly welcoming. There was a hand towel for the bathmat at the shower. There was no shelf in the bathroom for toiletry items.

Thank you so much for staying with us and for taking the time to write a review. It sounds as if it was Dawn who made the comment regarding the rug. I am sorry about that. She truly loves and cares about the hotel and I think that sometimes manifests itself in different, albeit awkward, ways. That being said, she is truly a gem for the hotel and probably its greatest cheerleader. With respect to the bathrooms, we have remedied the problem and installed shelves in all of the bathrooms and you will have a bathmat rather than a hand towel on your next trip. Thank you so much for your business and we hope to see you again soon.

Report response as inappropriateThank you. We appreciate your input.
This response is the subjective opinion of the management representative and not of TripAdvisor LLC
Brad D
2
Reviewed February 21, 2018
Short drive to Sugarloaf with shopping and dining within walking distance.

Nice clean room with Queen bed, nice bar on premise and plenty of open areas for game playing, reading etc. Longfellows restaurant right across the street. Great burritos close by. Plenty of local shopping, ski museum nearby. Short drive to an IGA for groceries. Short drive to Woodsman for the best breakfast favored by the locals.

Thank you so much for staying with us and for taking the time to write a review. We are thrilled that you enjoyed the hotel and our town of Kingfield. If you are skiing Sugarloaf for 2018-2019, be sure to check out our new ski and stay packages on our website. We have a great one which includes lift tickets, food and drinks at the pub and lodging. Again, thank you so much for your business and we hope to see you again soon.

Report response as inappropriateThank you. We appreciate your input.
This response is the subjective opinion of the management representative and not of TripAdvisor LLC
aform5
Kittery, Maine
5222
Reviewed February 18, 2018
Great Stay! Close to Sugarloaf

The older hotel is in great shape with a newly renovated pub. Our room was quiet cozy and comfortable with a spacious bathroom. The TV was small, but fine for us. Lots of nice vintage touches throughout. The pub was lively and fun. The pub menu is limited, but we were happy with it. It's about 15 miles to Sugarloaf so very convenient for skiing and outdoor activities. Good value! The Kingfield Woodman cafe is about 1/2 mile away and great for breakfast. We'll stay at this hotel again next time we're in the area.

Report response as inappropriateThank you. We appreciate your input.
This response is the subjective opinion of the management representative and not of TripAdvisor LLC
christinerL8147OU
Bradenton, Florida
4316
Reviewed February 7, 2018
Wonderful 100 year old Hotel!

Enjoyed our stay here. Lots of charm, very quaint. The owner's mother was the front desk receptionist, nice but an odd duck. I guess you could say she was part of the charm! Their restaurant was not open yet but it was still a lovely hotel.

Thank you so much for staying with us and for taking the time to leave a review. We are thrilled that you enjoyed your stay. It is true that Dawn is a bit of an odd duck, however, she is a great cheerleader for the hotel and truly has its best interests at heart. Again, thank you so much for your business and we hope to see you again.

Report response as inappropriateThank you. We appreciate your input.
This response is the subjective opinion of the management representative and not of TripAdvisor LLC
View more reviews
PreviousNext
1…345…42