Quality Inn
Lock in the lowest price from these sites

Expedia.com
Booking.com
Hotels.com
View all 14 deals
Prices are the average nightly price provided by our partners and may not include all taxes and fees. Taxes and fees that are shown are estimates only. Please see our partners for more details.
101pathfinder
Pewaukee, Wisconsin
109

My wife and I stayed here for two nights last week, Sept. 16th and 17th. Rate was $119/night just driving up with no reservation. Requested a room on the 1st floor near an entrance, for convenience, and were given room#107(two queen beds). The room was clean and with the TV on, didn't really notice any noise issues. The beds were a little hard for our tastes, but we slept alright. The hot breakfast was served to order(scrambled eggs, sausage, bacon, waffles. Omelets and burritos are an option) and was perfectly fine given there was no extra cost. Coffee was good too. The woman preparing and serving breakfast was very friendly as were the employees at the front desk. Overall our two night stay was a pleasant experience with no issues. Would recommend and would definitely consider staying again when we're back in the area.More

Show less
Room tip: Room 107 was very convenient to the Breakfast area, and entrance from parking to the Hotel.

Thank you for the nice review. Yes we have a very nice breakfast. Lisa our breakfast lady is top notch, we hit the jackpot with her here. She goes out of her way to please everyone. We hope to see you again in the future.

Report response as inappropriateThank you. We appreciate your input.
This response is the subjective opinion of the management representative and not of TripAdvisor LLC
See all 176 reviews
Nearby Hotels 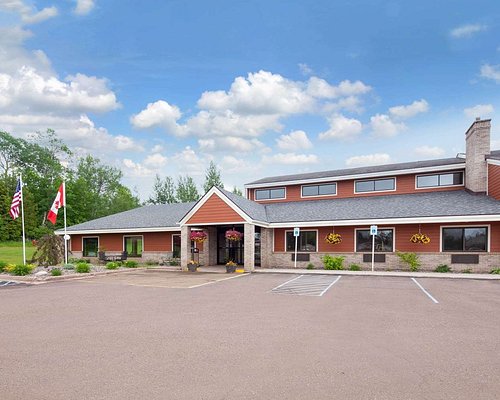 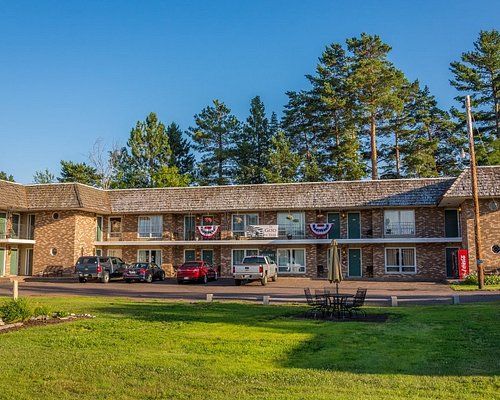 Top Rated
Budget Host Cloverland Motel
US$89
Booking.com
View deal
Free cancellation
Reserve now, pay at stay
Expedia.com
US$89
Hotels.com
US$89
Priceline
US$89
View all 11 deals from US$89
382 reviews
0.7 km from Quality Inn
We compared the lowest prices from 11 websites

Breakfast included
AmericInn by Wyndham Ironwood
US$260
US$254

Check in took about 30 minutes, two people ahead of me. Couldn’t find my reservation, found it after I provided my reservation number, then said we already checked in. She finally realized I hadn’t by talking to her boss. Then had given my room away to someone who realized after they entered they wanted a king room instead of two queens and used the hand towel which the clerk assured me had been replaced and nothing else was touched. The minute we opened the door the room smelled, or should I have stunk of past pets. Pro they gave us a great breakfast every day, hot or cold with tons of item choices. Walls are also paper thin and can hear next room.

I so apologize for all the confusion. I will be looking into what happened. Again I do apologize.

Report response as inappropriateThank you. We appreciate your input.
This response is the subjective opinion of the management representative and not of TripAdvisor LLC
Nancy G
Grand Rapids, Michigan
228192
Reviewed August 11, 2020
A quick stop

We were just traveling through town and stayed one night. Our check-in was smooth and friendly. The room itself was very small and the bed was not that comfortable. I'm not sure how we got in a 1 queen room when we requested a 1 king room, but it was fine and we didn't want to make a fuss as we were tired after a long day in the Porcupines. I wish there had been a night stand on either side of the bed, however. At any rate, it was a decent hotel on the main road, and there were plenty of clean towels int the bathroom.

I apologize that you didn't get the room you thought you were getting. If people want a quite room yes going up stairs is the best. Thank you for staying withus

Report response as inappropriateThank you. We appreciate your input.
This response is the subjective opinion of the management representative and not of TripAdvisor LLC
Nancy C
Englewood
5718
Reviewed July 28, 2020
Not safe to stay during covid pandemic

The State of Michigan requires the wearing of masks during this pandemic. The staff here obviously doesn't agree, because they wear their masks with their noses and/or mouth uncovered, which is like not wearing one at all. I did not feel safe having their complimentary breakfast there because the person doing the food prep wore her mask below her nose. Some of the maid staff wore their masks under their chins.

Besides that, if you are on the first floor, you can hear every step of the people in the room above. And the pillows were not comfortable. So, it was a disappointing stay.

I apologize for your disappointing stay at this hotel. Wearing a mask is a fairly new mandate in Michigan, and it is difficult for some people to work active jobs and be able to breath effectively. My main concern is for the safety of the guests as well as the safety of my staff. Sometimes it is much easier to maintain the recommended 6 feet social distancing for the housekeepers while they are working. My staff, as everyone in the United States, is adjusting to the new standards. In the UP, we have felt a false sense of security because of the extremely low numbers of Covid-19 cases. As more people like yourself travel to our area, the number of cases has increased significantly. We are doing the best we can in these trying times, and are adjusting to wearing masks while working.

Report response as inappropriateThank you. We appreciate your input.
This response is the subjective opinion of the management representative and not of TripAdvisor LLC
bonomo123
Fife Lake, Michigan
7949
Reviewed June 24, 2020
Overnight stay

Overall experience was positive. But room walls and ceilings are very thin and all movement above us was intrusive. Even simple walking sounded like an elephant herd. I would recommend staying on the top floor.

Thank you for staying with us. Yes our building is 30 years old and there is not sound barrier between floors, I'm sorry about that.

Report response as inappropriateThank you. We appreciate your input.
This response is the subjective opinion of the management representative and not of TripAdvisor LLC
L4123BPdans
1
Reviewed February 10, 2020
Money trumps grief and time

My girlfriend & I have enjoyed staying at Choice Hotel group hotels for a good hotel at an affordable price, great customer service and we get a discount from an association we belong to for nearly all our vacations over the last 10 years. Upon arriving, the staff was very friendly, asking why were people from IL way up here in the UP. I said we were tired, having just finished a 6 hr drive and were in town for a friend's funeral but wanted our room so we could change & go out for fish fry dinner. The staff made their recommendations and expressed their condolences. The staff was having issues with the new system but offered us an even more discounted rate ($85) for bereavement. We expressed our gratitude on both counts and went off to our room.

The room was clean. Furniture was old and dated, walls & ceiling are very thin as we heard everything in the halls & room above. The wall heating/AC unit went on & off every few minutes. We're not sure the unit was working properly either since we set the temp to low 60's and the temp never got near that cool in the room. We made do since it was one night reservation. The best part of the room was the shower & the water pressure. I've NEVER had so much water pressure from a shower and I loved it!

After getting out of the shower, I noticed our bill was under the door. We were not given the bereavement rate we had been promised but rather the original discounted rate. I went down to correct the issue. I was told that hotel management had over-ruled the $34 cheaper bereavement rate we'd been promised since we didn't book our reservation in person or over the phone and because we were at an already slightly discounted rate, roughly $15. Apparently, both the manner in which the reservation was made & the $34 means FAR more to the manager than upholding the promises of their employees, the loyal Choice Hotel's customers' emotions during their stay, the 6 hour drive, etc. Frustrated at the lack of emotion, logic, etc from the manager, we had enough time to try the continental breakfast. Yet another decision we regret. The danish tasted old and borderline stale and the eggs were cold.

Overall, while the staff we talked to were very nice, we won't be staying here again. There were tons of clearly cheaper overnight stays at highly rated places in the area that probably don't care how we make our reservation nor would they back out of a promised rate. We chose to stay here based on past experience. We greatly regret that decision. Choice Hotels may have lost a loyal customer over this. backing out of a $34 lower rate we were promised and the manner in which we made our reservation. Money trumps grieving customers who drive 6 hrs to stay there.

I apologize for any confusion at check in about your reservation. With your discount through choice is a discount made between farm bureau and choice. We are sorry for your loss.