Stayed at the Grand Traverse Motel for one night in mid October. Room was a deluxe king. It was pretty good, clean, and recently renovated. However there were a few challenges. The blinds don't do a great job of blocking the light so the sun is very visible pretty early. Could really use some dark curtains. The bathroom remodel wasn't very good and the window had no screen. Both of those were not huge issues. The bigger issue was that, while the bed appeared fairly new, it was broken. The mattress frame collapsed to ~6" on one side when you laid down on it. (slept on by a very averaged sized person) This caused a rather uncomfortable night. Would have mentioned at check out, but the office is closed in the morning. More

Show less
Trip type: Travelled as a couple
See all 89 reviews
Nearby Hotels 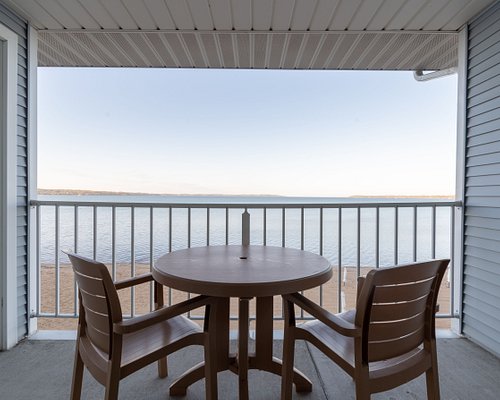 Breakfast included
Sugar Beach Resort Hotel
US$80
Booking.com
View deal
Agoda.com
US$80
Hotels.com
US$80
Priceline
US$80
View all 16 deals from US$80
473 reviews
5.0 km from Grand Traverse Motel
We compared the lowest prices from 16 websites 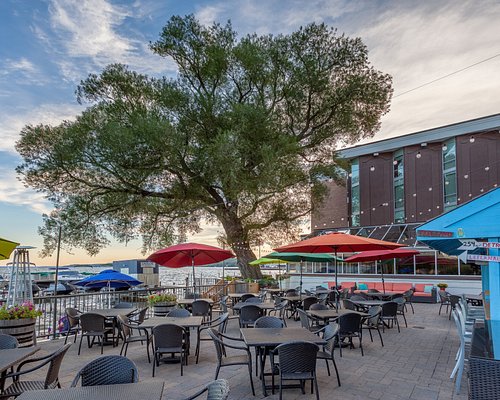 I found the Grand Traverse Motel at the last minute for a 1 night stay in Traverse City on our way home to Ohio. The motel far exceeded any expectations we had and our room was even more updated than pictures appear (I unfortunately did not take any of my own, as we were in a bit of a rush upon arrival). The room was spotless and had a very nice flat screen tv, mini fridge, and bathroom. Five minute drive to downtown, where we found open parking to be abundant. Both staff members we communicated with were very friendly and helpful. I imagine the price is hard to beat in such a lovely city.

This review is the subjective opinion of a TripAdvisor member and not of TripAdvisor LLC
ericbO1475JB
Lima, Ohio
2
Reviewed July 14, 2020
Don't waste $130 dealing with Grand Traverse Motel like it did!

The Grand Traverse Motel's use of third party sites and the way they hide the fact that your reservation is non-refundable is in my humble and naive opinion sufficient reason for me to warn you to avoid this place when there are so many honest options available. Sleep in your car, on a park bench, but dont let them grab your money like they did mine.

This review is the subjective opinion of a TripAdvisor member and not of TripAdvisor LLC
SavvyTraverler888
Traverse City, Michigan
1
Reviewed March 20, 2020
Rude front desk lady

I stayed at this motel last year during may and the front desk lady was anything but friendly, me and my fiance wanted to stay together for a night so i booked a room, the room was nice but still had strands of hair in the drain and toothpaste in the sink, i woke a late and checked out a little late when i went to return my key the front desk lady said that i would charged for late checkout the price for the night there was supost to be 98$ and she charged me 250 for checking out late. and she was very rude about it. i wouldnt rate this place 1 star honestly. Very Very poor hospitality

Hello! Though it's hard to respond regarding a stay nearly a year ago, I do know that I am the only female that would have been at the front desk last May and I've never, personally, charged a late check out fee to any guest. In the rare case we have charged for a late check out, it would have been $10 per hour after noon (with regular checkout at 11am). Our nightly rate last May was never $98, and I was never made aware of any instance where there was an issue with guest of this sort. If you're sure that it was our motel that you stayed at, please email us and I will pull your reservation record to see what happened. We do have a $250 fee if a guest smokes in a room and we have to do extensive remediation, which we've only charged 4 times in the past 2 years. New Ownership in May, 2018.

If this was not the motel that you stayed at, please remove this review.

Report response as inappropriateThank you. We appreciate your input.
This response is the subjective opinion of the management representative and not of TripAdvisor LLC
sweetfame
Paris, France
3550
Reviewed January 27, 2020
Well placed but that's all.

(our stay august 2019) Motel is well placed. Not far from the lake by feet but it only gives accès to a private hotel beach located on opposite side of the street which means you will have to cross the street surrounded by traffic. Needs a lot of attention to do that.
If you want to access the lake you’d better drive 5 min on this road in direction of the city.
This motel is a typical one.
We rented a room for 3 and get 3 queen beds in our flat. You would expect at least the same number of furnitures to held 3 to 6 persons. This was not the case. For example only 2 chairs while we were 3... only 4 little spoons or 5 forks... same for coffee machine able to do only for 2 persons approx..! The interior is quite old. Not refreshed for a while. Bathroom is just fine.
But beds were awful. We injured our backs during our 3 nights over-there and slept very badly.
The person on sites are not really willing to help. Pity. I would not go back.

I don't think that you stayed at our motel. We do not have a private hotel beach, none of our rooms have 3 beds, and there aren't forks or other cutlery in the rooms. Also, our beds are all new from June 2019.

We invite you to stay with us sometime and hope that you have a more enjoyable time than where you stayed last August. :)

Report response as inappropriateThank you. We appreciate your input.
This response is the subjective opinion of the management representative and not of TripAdvisor LLC
ImAnAdventureSeeker
Chicago, Illinois
91
Reviewed October 31, 2019
Not really happy with my stay here

First off, the Grand Motel is anything but! For several reasons, from having to fill out the extra and completely unnecessary paperwork when checking in, to getting the wrong key to my room, and finally receiving a room that reeked of stale smoke. I also got kind of a creepy vibe from the manager Bob, his natural demeanor is kind of on the dramatic side if you know what I mean. Note: they don't even have an ice machine, but what they have instead is a a small cooler (not an ice machine) filled with ice and only available until 10PM at night, next to the front desk. And this is supposed to service the entire motel. How cheap! As far as their breakfast goes, it consists of a small tray filled with granola bars and miniature muffins! When I saw it in the morning I couldn't believe this itty bitty tray was supposed to feed the entire motel?? Naturally I took a pass on it. Another thing, this place has bugs, which I took pictures of. Lastly a couple I met there said they have charged as much as $250 a night to stay there, which IMO is a exorbitant amount to pay for such a substandard motel room. BTW they don't even have grab bars for their bathtub which I found very hard to get into. The only positive about this motel was the tv had good reception and they stock the room with some nice toiletries from a local company by the name of Great Lakes Bath & Body Shop, but that's about it. So honestly I'd stay away from this place, and I mean far far away!!