US$99
US$82
View Deal
SAVE US$17
Expedia.comUS$94
Hotels.comUS$94
HurbUS$99
View all 17 deals
Prices are the average nightly price provided by our partners and may not include all taxes and fees. Taxes and fees that are shown are estimates only. Please see our partners for more details.
S210371
Flower Mound, Texas
27646

We had to stay one night and didn’t like the hotels in Atlantic City. This hotel and the rooms were clean. We reserved the bay view room (no higher price) and enjoyed the view.

They removed the in room coffee due to Covid. That was a bummer. The to go breakfast was quite limited to other Holiday Inn’s we have stayed. Some cereal boxes, milk cartons, yoghurt and cereal bars. Coffee was available upon request from the front desk.

Trip type: Travelled with family
See all 487 reviews
Nearby Hotels 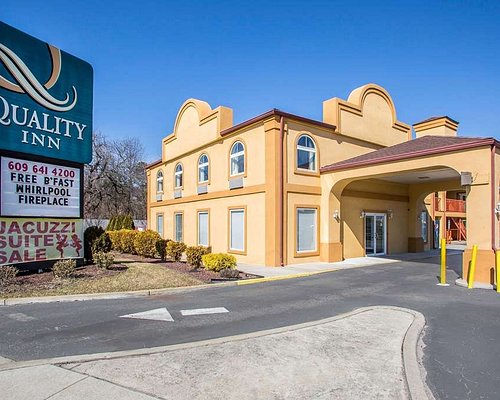 Hotels.com
View Deal
Pay up to 12X
Booking.com
US$58
Expedia.com
US$58
ZenHotels.com
US$62
View all 14 deals from US$58
307 reviews
1.1 km from Holiday Inn Express Atlantic City W Pleasantville
We compared the lowest prices from 14 websites
Breakfast included
Wingate by Wyndham Atlantic City West
US$68
US$64

We needed a quick local trip to just get out of the house and thought this location would be great for the family, per some of the reviews; it wasn't!
We paid for a bay view but I'm guessing the gas between the panes of glass had discharged making it impossible to see.
The bay was loaded with broken glass and trash letting us know, no one looks after this area.
It's also used by the locals as well as guests and a wind surfing business; that caused a very small area to be congested!
The microwave and refrigerator had no power when we arrived and that took 30 minutes to resolve.
As stated by other guests, the desk was never properly staffed and my one encounter with the associate who checked us in was less that professional.
I'm a manager in retail so I've learned to dismiss certain kinds of behavior; some people just can't help themselves.
Our to go breakfast was poor at best, cereal but no milk one day;
milk but no cereal the next and fruit one day and none the next.
We were there for three day and that was too long!
I understand that precaution have to be taken during this pandemic but an open hotel is still required to have its associates to provide the best experience possible.
That was not done in this case and when you travel with children, reviews are important so...
If you need a place to stay outside of Atlantic city for the night, (a single night) this MAY be a good place
Anything other that ; Keep it moving!
Traveling with children, please don't stay here!

It's always our pleasure to receive feedback from our visitors. I truly appreciate your time and effort to share yours, and for choosing our hotel when you were in the area.

I'm sorry to hear that you had trouble seeing the view from your room and that the microwave and fridge didn't have power when you arrived. The morning meals could have been the highlight of your stay, and I'm concerned that our breakfast options fell below your gauge. We are all about providing excellent guest assistance. I'm worried that you weren't pleased with our staff service and headcount. Please understand that some of our hotels are operating with a reduced workforce, services, and amenities. These updates are temporary, and we are hoping to go back to normal operations soon. The review of our visitors helps us in taking steps for improvement. I went ahead and shared your thoughts with the management team.

We are hoping for your return so we can have the chance to make it up to you, and give you a frictionless experience.

Report response as inappropriateThank you. We appreciate your input.
This response is the subjective opinion of the management representative and not of TripAdvisor LLC
Carlsara1229
Corning, New York
10
Reviewed June 22, 2020
Not Family Oriented

Came here with my wife and son and daughter for 3 days. Two entire floors, the elevator and stairwells reeked of marijuana. Took kids outside to beach and were multiple people of varying ages smoking marijuana on the beach from sun up until sundown. Drinking liquor straight out of the bottle and blaring music. It was horrible. Then we went to bed and they were shooting of boxes of fireworks off the beach. We mentioned to the Morning front desk man after the first day and he said there is nothing they could do about it. It was even seeping into our room. The day we left we had to ask for breakfast items because he said people were stealing multiple items. When we checked out he just said you can leave the key and walked away. Worst experience in a family hotel ever, and we travel up and down the east coast. Will never stay here again and recommend no one else to either, not worth the hype.

Thank you for taking the time to post a review from your stay with us. I was very concerned to read your comments regarding the common area condition, breakfast, and customer service. I understand your disappointment, and this should not have been the case. I will share your review with our team for improvements on our end. We appreciate you for staying with us and in line with this, I sent you a private message to address your concerns.

I appreciate you as our guest and I still hope you would give us another chance in the future so this time we can show you a simple and smart travel.

Report response as inappropriateThank you. We appreciate your input.
This response is the subjective opinion of the management representative and not of TripAdvisor LLC
cityshoregirl
Jenkintown, Pennsylvania
199
Reviewed January 27, 2020
Wanted to like it but....

We had a family celebration to attend near Ocean City and wanted to visit one of the newer casinos while we were in the area. Atlantic City hotels, or hotels at casinos, leave much to be desired, and outlying areas seem like risky locations. Seeing that this Holiday Inn had been renovated, I thought we would take a chance. I am particular when it comes to cleanliness.

Upon arrival there was no one at the front desk. We waited for quite a while. This is an obvious security risk and no one likes to stand there waiting with their bags. Several times during our stay I noticed that no one was at the front check-in. This is a major issue in my opinion. The room itself seemed clean and updated, however, they definitely forgot and neglected areas in the bathroom. The side of the tub was very damaged. Also, there was a rust spot in the middle of it. The floorboards/molding were very dirty and scuffed and in need of paint. The floor did not seem clean. I reported the damaged tub immediately. The response was, "You should have seen this place when it was a Comfort Inn!" We were not offered another room and would not have had time to change rooms anyway. The bathroom was far from pristine.

Dirty linens were piled all down the hallway. This was in the early afternoon. We went out for a while. When we returned at 4:15 pm, the linens were still piled throughout the hallways. I went through quite an ordeal to obtain an extra towel from one of the housekeepers. We were three people and the number of towels in the bathroom were insufficient.

When we returned later that evening, again the front desk was not staffed.

Breakfast was just OK. We got down there early, yet they were out of a number of items including the cinnamon buns that I had wanted to try. I told someone and they eventually brought some out. I tried one but it was practically still frozen in the middle.

I wanted to see the beach /bay area behind the hotel that I had read about. If only it looked like the pictures on the website. There was quite a bit of garbage out there around the seating/gazebo area. A shame. This could be a nice feature but someone needs to maintain it.

Again, no one at the desk when it was time to check out. I cleared my throat many times. Eventually someone came out of a back room.

I did not care for the area at all. Not a place where you want to get stuck with car trouble.

I would love to see some clean, reasonable, safe hotels in and around Atlantic City. Perhaps one day...

Thank you for choosing Holiday Inn Express and for taking the time to provide feedback about your experience.

I would like to start by apologizing to you for the inconvenience you encountered during your stay. We appreciate that you brought this to our attention. We take feedback seriously, thus, we have shared with General Manager and our front desk and housekeeping teams about the concerns you raised, particularly the cleanliness of the bathroom and the upkeep of the amenities in the bathroom and beach area, and also the availability of food at the breakfast buffet. We know that we can do a better job at this most especially with service provided at the time you brought up these concerns to our staff at the front desk and at the breakfast bar. It is our commitment to provide transparent, efficient and friction less experiences for guests and making the necessary changes would help us provide a better experience in the future. On the other hand, we are thank full that you had an easy time checking in, clean and spacious rooms and the availability of parking slots.

This will go a long way in helping us keep up with our guests, like you, who look for brilliant basics and seamless experiences who need a simple, engaging place to rest, recharge and get a little work done. I hope you will give us a chance by staying with us again to show you that your unsatisfactory stay was an exception.

We look forward to hosting your stay in the future.

Report response as inappropriateThank you. We appreciate your input.
This response is the subjective opinion of the management representative and not of TripAdvisor LLC
JoAnnR23
Highlands, New Jersey
301125
Reviewed January 20, 2020 via mobile
Great customer service

The only reason this is not a 5 star review is because there was no heat...and in January near the Atlantic Ocean it makes a difference. Larry, the manager saved the day; it was too late to fix the heat —we were leaving— he comp the room. Great customer service at a beautiful venue set off with ocean views and close vicinity to Atlantic City—without the noise.

This review is the subjective opinion of a TripAdvisor member and not of TripAdvisor LLC
EdG230
West Nyack, New York
318
Reviewed January 4, 2020 via mobile
Nice new hotel, area not attractive

I stayed here while in town for a trade show. Very affordable clean hotel with nice breakfast. Bay view was nice for sunset.
I usually stay in Absecon when visiting the area, but tried this hotel. The town was pretty run down and I had to go over to Absecon for dinner anyway.
The beach area in the rear was nice to visit, but needs some attention.
Easy in and out of Atlantic City.