Horrible Service; Would never go back; Negative stars if I could - Review of Contessa Resort

Travelocity
eDreams
FindHotel
View all 8 deals
Prices are the average nightly price provided by our partners and may not include all taxes and fees. Taxes and fees that are shown are estimates only. Please see our partners for more details.
Tourist681776
11

Horrible Service; Would never go back; Negative stars if I could

The cabins were advertised nicely however, my cabin had ants. I was too nervous to report to the front desk due to the awful attitude of owners. The owner made several racial comments while we were able to hear as guests regarding Jews and Blacks. We heard them scream at guests several times as our cabin was near the office. Guests did nothing but ask for room availability , assistance etc. The rooms weren't available until much later than stated. They overcharged us and never refunded the money even after asking a few times. I would never bring children there because of the language that is used openly. The steep incline from the water is also a problem and all the yelling and complaining about guests makes it very uncomfortable to enjoy. They have zero customer service skills and are actually scary to watch.More 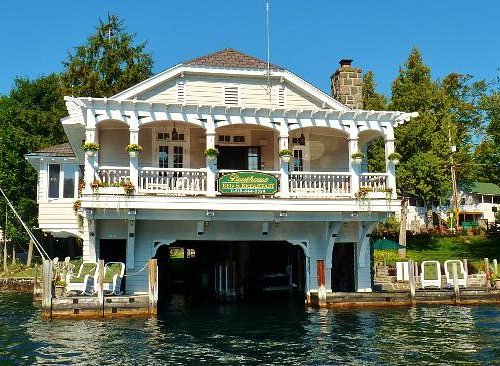 Taking safety measures
The Chateau On The Lake - Chateau Rooms

I and a group of friends were camping on Turtle Island for the weekend. My 89 yo father wanted to join during the day but needed a place to sleep at night. I chose Contessa because it was close to Turtle Is. I called to see which cabin would be closest to the lake edge so Dad wouldn't have to walk far from the dock. I was amazed at the way the man spoke to a potential guest and noted to myself that I hope there's someone a little nicer to deal with when we arrive onsite. The day we arrived I met the owner and as I tried to engage him to ask a few simple questions he kept walking away as I was speaking to him, making me follow him to finish my question. When I returned in the afternoon to check in, he became abusive and told me that he was going to cancel my reservation. I told him it was for my 89 yo father and he told me 3 times that he "didn't give a f#*k!" He cancelled my reservation which turned out to be a blessing. Dad stayed in the Sagamore and I don't ever want to give Contessa a dime of my money. Stay elsewhere!

This review is the subjective opinion of a TripAdvisor member and not of TripAdvisor LLC
Judy B
Lake George, New York
99
Reviewed August 22, 2020
Never going back

We'd made a reservation on line, based on it being on the lake with numerous amenities: pool (closed with no apology), ping pong (table was outside & unusable), free use of boats (they were available but full of water). We arrived at 5 pm & were told our cabin wasn't ready. NO apology. The grill was fifthy. Not sure it's been cleaned all summer. One of the twin beds had no mattress pad -we found it in the armoire & put it on ourselves. The queen bed had a holey blanket & a stained pilowcase. There were no small glasses that could be used for wine or the like.
We asked about the pool & Robert's response was: "it's closed. You can see that." When we pointed out that pools all along the lake were open, he said, "I'm not gonna police the pool because of Co-vid. End of discussion. "
I'm sure it's obvious why he has a big sign behind his desk: NO REFUNDS.
The dining room light didn't work. We told Robert our first full day there. He said they'd be by later. No one ever came. The only bathroom light that worked was over the vanity. The switch by the door did not work. I believe this is a code requirement.
The place could be very nice. It lacks so much routine maintenance: overgrown shrubs, rusty playground, overflowing garbage cans.
The positives: gorgeous lake view & 2 BR cabins you can rent for less than a week. The pictures on his website appear to be likely 10 years old.

This review is the subjective opinion of a TripAdvisor member and not of TripAdvisor LLC
Hbreig
37
Reviewed August 10, 2020
Believe the reviews and book somewhere else.

We arrived with tons of kids in tow to A green, not- opened-this-year pool. When we asked what’s the story with the pool we were verbally assaulted by an angry, abusive lunatic, the owner! He told us if we don’t like it, we should go home. Good luck finding any rooms nearby, he cackled when we were upset by our treatment. Our kids had waited months for this trip and so we all had to gather together and decide to suck it up for the kids. He then added insult to injury when he told two Families out of the five booked for the week that he didn’t have their rooms for that night! We again sucked it up and worked it out ourselves.

The boat business at the “resort” prevented the kids from swimming in the lake for the most part. There was a small man made sandy area with lounge chairs looking at the lake but it was in close proximity to all the boaters loading and unloading, docking and fighting with the deck masters. Curses flying. Oh, and it was at the bottom of a very steep hill. Calves convulsed on your way down and chests heaved on the way back up again. Make sure you don’t forget anything when heading down there.

The owner was arrested a day after our horrific arrival experience. The word around was that he was nasty to the wrong group. They didn’t suck it up the way we did and so he pulled a gun on them. We got to witness the sheriffs and all the hullabaloo that comes with a bunch of men in a dispute where a gun is drawn.

The view is amazing.No doubt. The same view must exist at a place where $279 a night plus taxes and fees gets you your cabin for the nights you book and the advertised pool and lake access that you promised your kids.

This review is the subjective opinion of a TripAdvisor member and not of TripAdvisor LLC
cuteziko
13
Reviewed July 29, 2020
Stay away - the owner is very rude and nasty

We called the property to ask a few questions and the owner turned from impatient to nasty and hang up on this. It is unconceivable how could somebody this unprofessional and hostile ends up running a hospitality business. We were completely turned off.

This review is the subjective opinion of a TripAdvisor member and not of TripAdvisor LLC
Edward1976
Rochester, New York
7153
Reviewed July 18, 2020
Not Bad

This place was not bad, we had a pet friendly cabin and it was clean. Full size kitchen. Shower was tiny but the water pressure was great! Read a lot about Captain Bob but he was good with me, probably would see what others wrote about if you didn’t except him for his personality. The rest of the staff Brandon, Becca and others were great. The road to lake was very steep so you will get a workout lol. Got charge alittle extra for a dog thought that was included in online pricing but wasn’t much so I was happy to get the best view cabin! Cabin 9!