We stayed at the Goose Pond Inn over President's day weekend. The innkeepers Jim and Beverly were great hosts. My family consists of introverts and they were not overwhelming for us including my son who is extremely shy. My son actually mentioned this place at the top of his list of favorites this vacation. The location is so close to Gore. The breakfast was gourmet and cooked to order. The beds were really comfortable. The decor was retro (almost museum like pieces). Thank you Beverly and Jim!

See all 100 reviews
Nearby Hotels

Sponsored
The Alpine Lodge
US$211 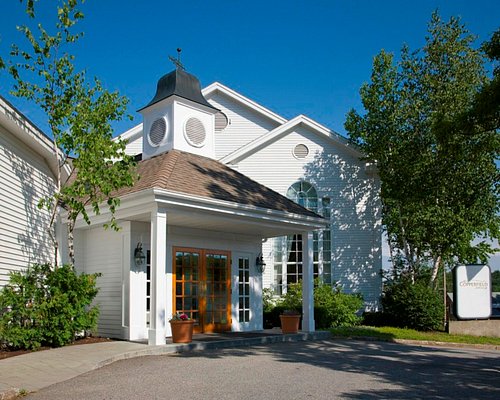 Phoenix Inn Resort
US$180
Booking.com
View deal
Free cancellation
Reserve now, pay at stay
Expedia.com
US$160
Priceline
US$180
Agoda.com
US$180
View all 9 deals from US$160
7 reviews
0.8 km from Goose Pond Inn
We compared the lowest prices from 9 websites

Taking safety measures
We compared the lowest prices from 12 websites
Black Mountain Lodge by Magnuson Worldwide
US$149
Booking.com
View deal
Free cancellation
Expedia.com
US$149
Hotels.com
US$149
Agoda.com
US$149
View all 14 deals from US$149
67 reviews
7.0 km from Goose Pond Inn

Desiring to ski at Gore Mountain for the first time, my daughter and I decided to try a B&B as opposed to the usual fare of relatively distant, cheap, aging motels with pealing wallpaper, televisions with poor reception and stale cereals out of small boxes that suffice for the complimentary, continental breakfast. (At $79 a night, one can't complain.) Although I had stayed at numerous B&Bs before at about the same price point ($!60 per night), my daughter had not and was curious as to what the experience is like. As the Goose Pond Inn is conveniently located right next to the slopes of Gore (a mere mile away), it was our initial and only choice. To make a long story a bit shorter, staying at Bev and Jim's was analogous to staying at a favorite grandma's Pennsylvanian farm house in the 70s as it has all of the sensory amenities, including twin, elderly, yet friendly spaniels and their not-so-stereotypical, vociferous friends--a pair of parrots, perched in a large cage next to the entrance. (As we entered, one whistled brazenly, and cried out something that Harvey Weinstein would most likely appreciate. Obviously, parrots can get away with anything, even misogyny. In any case, it was a bit of a rude, yet idiosyncratically comical welcome that I shall not easily forget.) Colorful, clean and pleasant, the room we stayed in faced the front of the house and afforded us partial views of the nearby ski slopes. Although the shower stall was small, it was still larger than what one would find on a cruise ship. The water was consistently hot and the pressure, quite intense. There were plenty of towels, extra pillows and a mattress that was incredibly comfortable. As there is nothing to do at night in North Creek but hit a local pub, read about Teddy Roosevelt, and drink excessively, the television is the second and last resort. The room we stayed in has a minuscule TV, but the living room downstairs possesses a widescreen that is available for public viewing. Perhaps at the pinnacle of the Pond's attractiveness is avuncular, inn-keeper Jim's "gourmet" breakfasts. If you happen to be afraid of strangers, eating at a table for six when you are part of a twosome may come as a shock to the system, but as I am an extrovert, I felt entirely comfortable--undaunted-- and I actually met some very congenial, fellow skiers. But I digress. The delicious vittles matched the countrified atmosphere and second helpings were generously offered. If you plan to ski till you drop, I'd recommend the homemade Belgium waffles if they happen to be the special. The fact that Bev and Jim are natives of New Jersey (so am I) was a bit ironic but rang true as we native Jerseyans know what hospitality means. Don't pass by the Pond (as you'll only wind up at the high school)! Give it a go.

This review is the subjective opinion of a TripAdvisor member and not of TripAdvisor LLC
lkiefer7
Syracuse, New York
31
Reviewed February 9, 2018
The owners truley make this experience wonderful

We stayed at this facility for a weekend get away to the local mountain for skiing. Bev and Jim were fantastic! They were both extremely friendly and make you feel right at home. The décor of the B&B is adorable and rustic, very well put together. The breakfast the next morning was very delicious. They had menus of all the local restaurants available for us to look at as well for our dinner out. We will be returning to this establishment.

This review is the subjective opinion of a TripAdvisor member and not of TripAdvisor LLC
Kimberly S
2
Reviewed February 5, 2018
Excellent Bed and Breakfast

We have often skied Gore mountain but had never before taken advantage of the nearby lodging. I had booked the inn as a part of an “I love NY” package. Beverly and Jim are consummate hosts! They allowed us to pick up our ski passes in the morning of our check in day. The room was warm and warmly furnished. The entire inn has a quaint homey feel. The breakfast menu was diverse and absolutely delicious. Perfect, hearty amount to keep one going for a day of skiing. The bed was comfortable and the shower hot! Many thanks to Jim and Beverly for a great stay and hope to visit again soon.

This review is the subjective opinion of a TripAdvisor member and not of TripAdvisor LLC
travelers4ny
Ny
2948
Reviewed January 26, 2018
Lovely Home

Perfect location to ski at Gore. Cozy inn with homey feel and great skier's breakfast! Would go back again. Bed was comfortable and enough space to store ski clothes etc. Beverly and Jim are gracious hosts.

This review is the subjective opinion of a TripAdvisor member and not of TripAdvisor LLC
collegequestor
New York City, New York
1
Reviewed January 22, 2018
Comfortable, convenient and overall lovely

Bev and Jim were the most friendly and gracious hosts! My brother, sister, and sister-in-law and I arrived after 10pm and they left the door open/light on for us with a note directing us to our room. Woke up to the most delicious breakfast options (they had a whole menu!) - ALL of our meals were amazing, both mornings. The rooms were cozy and clean and fully equipped. The B&B was just a mile from Gore Mountain, so it took us no time to get there every day. Prices were very reasonable for all that we got. We hope to be back here soon! Thanks to Bev & Jim for a wonderful weekend.