Quite and Comfortable - Review of Comfort Inn & Suites

Comfort Inn & Suites
Lowest prices for your stay
Lock in the lowest price from these sites
US$109
US$88
View deal
Comfort InnUS$88
FindHotelUS$93
Hotels.comUS$104
PricelineUS$88
Expedia.comUS$104
ZenHotels.comUS$109
View all 17 deals
Prices are the average nightly price provided by our partners and may not include all taxes and fees. Taxes and fees that are shown are estimates only. Please see our partners for more details.
russpei
Lehigh Acres, Florida
546167

The wife and I stopped in after a long day of driving and found this quality hotel. Room was spotlessly clean. The beds were very comfortable but I did not like the little square pillows ( all comfort inns had these but no problem we had our own pillows). The hotel staff were very friendly and accommodating. Limited breakfast due to covid. Plenty of parking and easy on/off the highway. 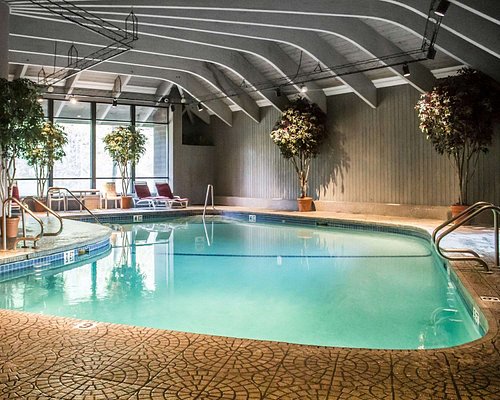 Breakfast included
The Woodlands
US$130
US$95

After spending Monday, August 31, 2020; without water my wife put up at this hotel The service and the staff have been excellent! I am hoping to be reunited my wife today (September 3, 2020). Best thing about the place, the availability of coffee 24/7! Worst thing about here was credit card payment had to be done in person!

This review is the subjective opinion of a TripAdvisor member and not of TripAdvisor LLC
julietinpa
Tatamy, Pennsylvania
44
Reviewed August 24, 2020
DISGUSTING!!!!!

I just asked the lady at the front desk if we could have a late check out.like an hour.she said no problem, how is 12. I said great thank you. Her name was Kim, she was very nice. Her manager named Roz, immediately came over like a lunatic and was like no you can't promise her that, we are booked solid, blah blah .I said ok no problem, it was just a request I know it is not a guarantee. She proceeded to click around in the computer and proceeded to yell at me, I even at this point offered to pay for an upgrade if that would make it easier. She pointed her finger at me and literally said she would make an exception this time but to never ask again. I was like seriously no you don't have to do me any favors it was literally just a question. Poor Kim was standing there mortified. I felt very bad for her. Then when it was time to give them my cc, Kim asked me if I had anything other card that did not have the word "debit" on it. I said no I don't have cc, I use this card bc it is backed up by MC. Once again Roz jumped in and said well your bank may place a hold on your card, and we prefer not to have a debit card, blah blah blah, all in front of other customers. Again very rude!!!! Kim was not rude at all. Anyway, I have always had this explained to me about holds, whether it be a cc or debit, and my bank has never ever placed a hold on my card. And even if they did, all she had to do was tell me about that, which Kim already had done, and then minded her own business. continued

This review is the subjective opinion of a TripAdvisor member and not of TripAdvisor LLC
MrsSavage37
Wilkes-Barre, Pennsylvania
1
Reviewed August 6, 2020 via mobile
Celebrated my Anniversary

I would like to say that my husband and I really had a wonderful time, the staff was friendly and helpful, the hotel was clean, we really look forward to coming back to have another great time. Thank you

This review is the subjective opinion of a TripAdvisor member and not of TripAdvisor LLC
Judy M
1
Reviewed August 1, 2020
Was there for a funeral.

If you have any handicap issues, this is not the place for you! Too many steps. Restaurant we when to, we drove around to the back of the building to get to and then had more steps into the restaurant.

This review is the subjective opinion of a TripAdvisor member and not of TripAdvisor LLC
782barbaral
Watertown, New York
6229
Reviewed March 27, 2020 via mobile
Traveling home in scary pandemic

My husband and I traveling to No NY from Florida. With the current situation and coronavirus fears and with my husband being immuno compromised it has been a very anxious trip. I was very impressed with this hotel’s preparedness and precautions being taken for everyone’s safety. The minute I walked in the lobby I felt relieved...they had a table set up 6 feet in front of desk to minimize close interactions with desk clerk. On the table was a cup with “new” pens and “used” pens, the credit card reader and a bottle of hand sanitizer to use immediately after registering..the desk clerk wore gloves, they would not accept cash, would only check in one person at a time and only 5 people allowed in the lobby at any one time. The breakfast area was stripped of all tables, chairs and any other moveable items. Staff on duty was kept to bare minimum. Our room was very clean and based on the experience checking in I felt they must have taken extra precautions there as well...however we did use our Lysol and wipes as an extra precaution. Breakfast was very minimal due to the situation but very understandable...coffee, juice and packaged sweet buns. Checkout was drop your keys in a box on the table and go...clean and simple. I highly commend this hotel for taking these actions...it was very reassuring to us. Thank you for protecting us and your staff to the best of your abilities..