Bosville Hotel
Lowest prices for your stay
Lock in the lowest price from these sites
US$315
Free cancellation until 21-08-06
Reserve now, pay at stay
View deal
Expedia.comUS$316
Hotels.comUS$316
PricelineUS$315
CheapTicketsUS$316
Orbitz.comUS$316
TravelocityUS$316
View all 14 deals
Prices are the average nightly price provided by our partners and may not include all taxes and fees. Taxes and fees that are shown are estimates only. Please see our partners for more details.
laandbill
Berlin, Germany
2649

The service we received from all of the staff in the hotel was excellent. All were attentive and friendly. A special call out to Rebecca in the restaurant who looked after us so well on both evenings we ate there. She was very approachable and keen to deliver a great service.
The only reason this is not a 5 star review is that the smell from the kitchens in our room (6) when the window was open was very strong. Something the management could address.More

Thank you for your kind review!
We are all very committed to our jobs and to providing all our guests with a memorable stay and we could not be more grateful to read about your experience. I will make sure Rebecca is made aware of your special mention about her, I'm sure it will make her entire month!
Many thanks for your feedback regarding the unpleasant smell reaching your room, we will make sure to address this in due course.

Thank you once again for having chosen the Bosville Hotel as your base on Skye - we look forward to welcoming you again in the future for another great stay.

Report response as inappropriateThank you. We appreciate your input.
This response is the subjective opinion of the management representative and not of TripAdvisor LLC
See all 387 reviews
Nearby Hotels 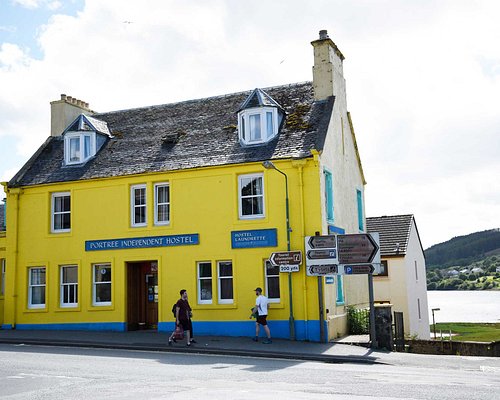 Great location for access to Portree facilities and for exploring Skye. All staff were excellent particularly Linda on reception. Good covid procedures in place. Excellent breakfast and dinner reviewed seperately for the restaurant. Quite expensive but worth it.

Thank you for your kind feedback.
Our entire team is proud to hear we could provide you with such a safe, enjoyable stay, having you experience Highland hospitality standards first hand! It is great to hear the Bosville could serve so well as a relaxing base after your day out exploring the island.
We hope you had an equally enjoyable onward journey and we look forward to welcoming you again in the future!

Report response as inappropriateThank you. We appreciate your input.
This response is the subjective opinion of the management representative and not of TripAdvisor LLC
B4068XJlaurenw
Kirkintilloch, United Kingdom
2
Reviewed May 9, 2021
Lovely, cosy stay

We stayed at this hotel as the Lady Marmalade was shut and we were very pleasantly surprised.

Rooms are lovely and cosy and nice touches such as coffee machine and shortbread topped up daily, lovely toiletries, robes and slippers. The room was also immaculate with a very comfortable bed.

The breakfast is outstanding. You're first given a beautifully presented continental breakfast and then you have a choice of a full Scottish/veggie Scottish or such things as porridge or eggs benedict.

We would like to draw particular attention to one member of staff (Matthius) who we found to be extremely helpful, professional and always very pleasant. He is a credit to the hotel.

We will definitely stay here again.

Many thanks for your lovely, detailed review of your stay with us!

We are so extremely happy to learn you were positively impressed by our amenities, rooms, meals and of course our team. We always aim to make each and every one of our guests experience only the best the Highlands can offer: a warm welcome, quality, local produce, a comfortable night's sleep and the best possible service. The great outdoors will certainly do the rest!

Thank you for your feedback regarding our favourite Austrian waiter, Matthias - he certainly is one of our most valuable team members and I am sure he will be ecstatic to hear he could actively contribute to make your stay even better.

We already cannot wait to welcome you back!

Report response as inappropriateThank you. We appreciate your input.
This response is the subjective opinion of the management representative and not of TripAdvisor LLC
Lynseyro
Falkirk, United Kingdom
1221
Reviewed May 6, 2021 via mobile
Excellent family stay

First class. We got the quadruple room. It was split level. Room was immaculate with slippers and gowns. Bathroom products lovely & locally made from highland soap factory. Meal in the restaurant was good quality and reasonably priced. Staff were extra helpful and friendly. Excellent location in the town centre looking over the harbour.

We are SO pleased by your flattering review!
We could not be happier to hear you found your stay to have been first class and that you could enjoy it so much all around. Creating happy memories for our guests and providing high standards of hospitality at all times are our main priorities and we are simply delighted to hear we did not disappoint!
Please do not hesitate contacting us, should you be travelling to Skye in the future.

Report response as inappropriateThank you. We appreciate your input.
This response is the subjective opinion of the management representative and not of TripAdvisor LLC
hannahmA3463EB
1
Reviewed May 3, 2021 via mobile
Miss Hannah McCallum

Thank you for your kind feedback!
It is so rewarding to receive such comments after such a long time away from work. It certainly provides the whole team with just the confidence and inspiration we need to pamper our guests for another coming season.
Please do not hesitate contacting us should you be back to this beautiful part of Scotland, we would love to welcome you back!

Report response as inappropriateThank you. We appreciate your input.
This response is the subjective opinion of the management representative and not of TripAdvisor LLC
Tain1984
Strone, United Kingdom
1329
Reviewed November 12, 2020
Average

We stayed at the Bosville in August 2020.

We booked a Premium Double, which was a mistake because the front facing room we were in was noisy, not the least from rubbish collections and a very early Co-op delivery (the Co-op was opposite our bedroom window). Bosville's website claims that the Premium Doubles look out across Portree and the harbour, but this description stretches reality a little, at least as far as our room was concerned.

However, the bed was comfortable and the en suite, with bath, spacious. But why such minuscule bedside tables is beyond comprehension! And why such inadequate lighting...?

Reception and checking-in was somewhat disorganised, although the staff were welcoming and friendly. Restaurant staff were also very friendly and welcoming (we had not only breakfast, but dinner too).

The food was not outstanding, but was acceptable. Breakfast service seemed disorganised; e.g. we ordered extra toast but either the order was forgotten or the server was distracted by something else. Eventually, following a reminder, the toast arrived, but too late to enjoy with the cooked food. Dinner was also acceptable, but, again, nothing to get the taste buds buzzing! The Bosville is not a place for quality, fine dining. Drinks are over-priced, almost to the point of greed.

As for ambience the Bosville lacks character. It is impersonal and cold, partly the result of some architect's or interior designer's obsession with military grey. With the exception of prints by Ron Lawson (which have genuine artistic merit) and a number of interesting historic photographs of Skye, the decor lacks any connection with Skye, its landscape, heritage or history. Inexplicably, open fires have been removed, probably on the whim of the owners and their architects and/or interior designers. This cold, impersonal approach to hotel interiors seems to be sadly gaining ground. What this type of approach to interior design does is take away whatever uniqueness and relevance to the location the hotel might have had before its conversion into a 'modern' hotel (whatever 'modern' means when it comes to design, etc).

Even the dining room lacks that the ambient warmth that was once typical of Scottish hotels, inns and lodges. With the exception of the Lawson prints and the old photographs, the gimmicky props that adorn some of the walls are exactly what they are; gimmicky and fake, with no attempt to make them look genuine (such props are also to be found in the bedrooms). The use of such props is more akin to some cheap soap, and fools no one with a discerning eye.

Maybe the approach to interior design as evident in the Bosville reflects the lowest common denominator, but it does little to make guests feel they are somewhere special, even though they're in a country that in itself is already very special.

Based on our experience, we would not bring overseas family and friends to the Bosville, because one aspect they want is 'a taste of Scotland'. Real Scotland. The Bosville does not deliver, even within this abstract concept.