La Quinta Inn & Suites by Wyndham Houston - Magnolia
Lowest prices for your stay
Lock in the lowest price from these sites
US$99
US$89
View deal
TripadvisorUS$89
Priceline
FindHotelUS$89
Hotels.comUS$89
Agoda.comUS$89
ZenHotels.comUS$99
View all 18 deals
Prices are the average nightly price provided by our partners and may not include all taxes and fees. Taxes and fees that are shown are estimates only. Please see our partners for more details.
mposey0409
Magnolia, Texas
1

The staff was friendly. Rooms where clean. Complementary breakfast was great. Would definitely recommend anyone coming to Magnolia to stay here. And I was thankful they were pet friendly. The next time we choose to stay hopefully it for a weekend get away and not because of having lack of water at the house. Arctic blast 2021

Review collected in partnership with this hotel
This business uses tools provided by Tripadvisor (or one of its official Review Collection Partners) to encourage and collect guest reviews, including this one.
See all 313 reviews
Nearby Hotels 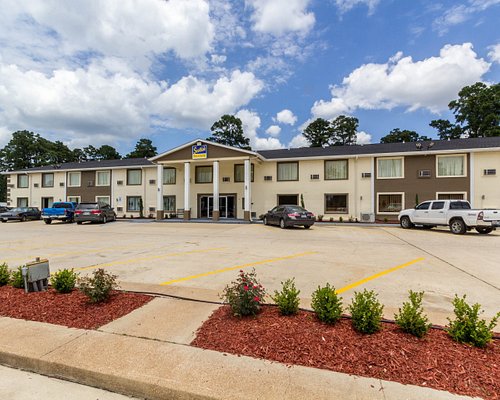 It’s conveniently located near everything you might need during your trip, I was able to enjoy a nice dinner within walking distance of the hotel with my father that I hadn’t seen in a long time and after that I had to do some minor shopping and everything was at my fingertips that it seemed

Review collected in partnership with this hotel
This business uses tools provided by Tripadvisor (or one of its official Review Collection Partners) to encourage and collect guest reviews, including this one.
Ask brandonstankevitz about La Quinta Inn & Suites by Wyndham Houston - Magnolia
Thank brandonstankevitz

This review is the subjective opinion of a TripAdvisor member and not of TripAdvisor LLC
ej9718
Wyoming, Michigan
193104
Reviewed January 10, 2021 via mobile
We would stay here again

We stayed here while visiting friends in Montgomery Texas. We were here for a total of 6 nights and we were very satisfied. It was very clean and everyone on staff was very friendly. The room was spacious enough for me to get around easily in my power wheelchair and for us to stay comfortably for a full week. The breakfast area was nice but the food options were definitely more limited than most hotels we have stayed at during Covid. Overall, we would definitely stay here again when visiting Texas. There were plenty of restaurant options near the hotel and it is located in a great spot for visiting neighboring counties.

This review is the subjective opinion of a TripAdvisor member and not of TripAdvisor LLC
snowmancollector
Corpus Christi, Texas
1
Reviewed November 23, 2020
Wedding Weekend

Enjoyed our stay, clean hotel and rooms. Friendly staff. Would definitely stay there again. The breakfast area was very clean. Plastic gloves were required for self-serve of the food. Sheets and towels were all clean. Room size was good.

Review collected in partnership with this hotel
This business uses tools provided by Tripadvisor (or one of its official Review Collection Partners) to encourage and collect guest reviews, including this one.
Ask snowmancollector about La Quinta Inn & Suites by Wyndham Houston - Magnolia
Thank snowmancollector

This review is the subjective opinion of a TripAdvisor member and not of TripAdvisor LLC
KimmieTheNurse
Marksville, Louisiana
256
Reviewed November 12, 2020 via mobile
The room was decent, the issue with the charges is ridiculous

The room was ok, there was an odd smell but it was manageable. However the issue with the charges and the hold on my account is ridiculous.
We checked in on 11/6 and checked out on 11/8. I used my debit card and was aware there would be a hold on the card. I was charged a total of 3 times now. Twice for $181.26 (the total charges for our stay) and a charge of $129.90 and another charge for $51.36 (the breakdown of stay and taxes, when added together equals $181.26). These last two charges appeared on Tuesday, 11/10. Today is now 11/12 and so far I have only been refunded $129.90. It was my mistake in using a debit card, but I have NEVER been charged 3 times. I have called the hotel, they say they only see one charge and said “It should be off in a couple of days”. We checked out Sunday and now it’s Thursday evening and I still have $200+ on hold? I called corporate and they basically said since it’s a franchise there’s not much they can do and it may take up to 10 days. Basically no one can or will do anything and the little sign at the front mentioning the hold doesn’t say they will hold twice the cost of your stay. I have stayed at LaQuinta many times and will never stay there again because of this. So whatever you do, do not pay with a debit card.

I went back to check all charges and there is only one charge that one for $186.26. Also went on company Credit Card website and there was only one charge. My suggestion is call your bank and ask them why so many different charges on you card, if that still has not help give me a call at the hotel

Report response as inappropriateThank you. We appreciate your input.
This response is the subjective opinion of the management representative and not of TripAdvisor LLC
Vacation44322640986
1
Reviewed October 29, 2020
Good Before... Not This Time

I've stayed here before and it was ok. This time I got a room that was not very clean. It was disappointing this trip. The floors were coated with something oily and the bathroom was not cleaned very well.

Review collected in partnership with this hotel
This business uses tools provided by Tripadvisor (or one of its official Review Collection Partners) to encourage and collect guest reviews, including this one.
Ask Vacation44322640986 about La Quinta Inn & Suites by Wyndham Houston - Magnolia
Thank Vacation44322640986

Thank you for taking the time to tell us about your experience at La Quinta Inn & Suites by Wyndham Columbus TX. I am sorry that your experience did not meet your expectations; please allow me to express my sincerest apologies.

Report response as inappropriateThank you. We appreciate your input.
This response is the subjective opinion of the management representative and not of TripAdvisor LLC
View more reviews
PreviousNext
123…53