No private parking. You have to storm the wild roads of halandri to safely park your car. A lot of noise even after midnight from the streets. Many restaurants and cafes at a 500 meter distance. Breakfast ok. Decent staff. Not very impressed.

Trip type: Travelled on business
See all 127 reviews
Nearby Hotels

Top Rated
Breakfast included
Mirivili Rooms & Suites
US$100
US$90
Booking.com
View deal
Free cancellation
Hotels.com
US$90
Expedia.com
US$90
Agoda.com
US$100
View all 12 deals from US$90
28 reviews
1.6 km from Acropol Hotel
We compared the lowest prices from 12 websites 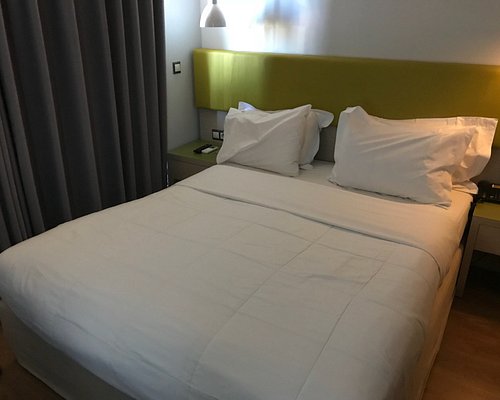 Elements Hotel Apartments
US$79
US$71
Tripadvisor
View deal
Hotels.com
Booking.com
US$71
Expedia.com
US$79
View all 16 deals from US$71
93 reviews
1.6 km from Acropol Hotel
We compared the lowest prices from 16 websites 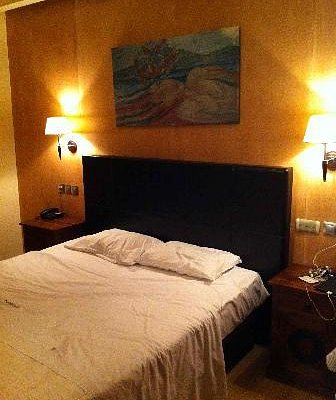 Expedia.com
View deal
Free cancellation
Reserve now, pay at stay
Booking.com
US$88
Agoda.com
US$79
StayForLong
US$96
View all 14 deals from US$79
375 reviews
2.7 km from Acropol Hotel

We choose this hotel because it is only 20 minutes from the AP and easily accessible. No parking but you can park on the street. Rooms are clean and nice but the bathroom is old ( but clean)
Breakfast was ok but no fresh juice.

This review is the subjective opinion of a TripAdvisor member and not of TripAdvisor LLC
grigas86
62
Reviewed August 7, 2019 via mobile
Woken up by plumbing repairs

This hotel is not bad, clean and very friendly staff. Room service was delicious and inexpensive. My issue is at 8am I was woken up by someone VERY LOUDLY working on the plumbing in the room next door. Seriously it was hammering and banging through the walls for a couple hours at least. So much for getting a good night sleep. Probably should have been done during the day.

This review is the subjective opinion of a TripAdvisor member and not of TripAdvisor LLC
Marios O
Limassol City, Cyprus
10015
Reviewed May 29, 2019 via mobile
Very very poor hotel

The food (kebab) was full the staff had a fight and everyone in the breakfast was hearing the the room very small and especially the bathroom old and small, to issue a receipt it took them a hole day and my 9 month child got an allergy from something, when we asked for a baby high chair they said they did i not have. Very bad experience.

This review is the subjective opinion of a TripAdvisor member and not of TripAdvisor LLC
autopop
Cheshire, United Kingdom
4022
Reviewed May 19, 2019
Problem Solved

We were going to an island via Pireas, but the issue was that our flight was not landing till 2200 hrs at Athens. Having stayed in Plaka before we knew it was fairly expensive to both sip and kip. Booked a taxi through the hotel web-site to collect us from airport for €43, it is good to see your name on bit of paper, except when there is about 200 drivers, and were in hotel bar by 2225 watching Tottenham v Ajax. The reception staff were professional and helpful. The room was a good size and the bed was comfortable, surprisingly the bathroom was a whopper, by Greek standards, I did not have cat handy to test it. It was not until the following morning that we saw the very good sized balcony, we were facing the back which was not pretty but obviously quieter. An excellent breakfast was served including bacon, sausage eggs, a selection breads cake and juices and very drinkable coffee. It is easy walking distance of Chalandri where there were several restaurants, banks and shops. We paid €4 for a taxi to Pentelis station and €1.40 for train to Pireas, nod to Yiassas.
I would consider this hotel if staying in Athens as it is cheaper, all the surrounding restaurants would be cheaper and it appeared a nice quiet residential area

Room tip: At the back, unless you wish to look at the dancers opposite
Ask autopop about Acropol Hotel
Thank autopop

This review is the subjective opinion of a TripAdvisor member and not of TripAdvisor LLC
laserkid
Lodz, Poland
1000479
Reviewed May 9, 2019 via mobile
On outskirts of Athens

Convenient location, if you come to Athens by plane. The rooms are small and the bathrooms look rather basic. The biggest problem is the noise coming all night from the busy street, especially if you have windows from the front side. The breakfast is more or less satisfactory and the staff helpful and polite. Arriving in the night could be the problem to find the parking place. Price acceptable.