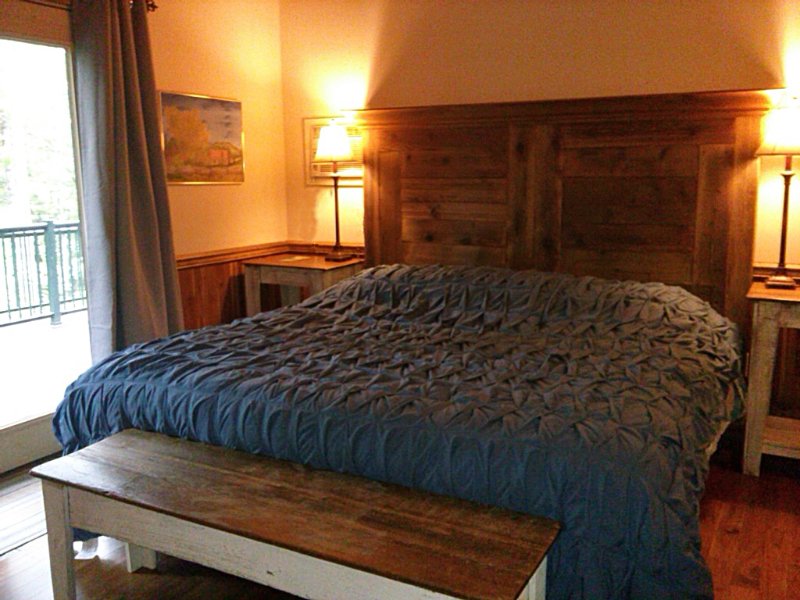 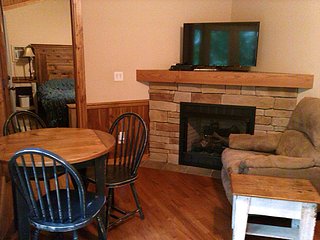 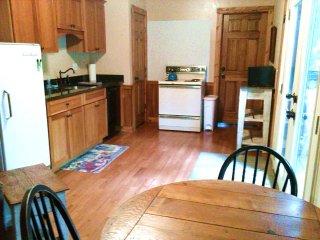 Nice,but Contract deceiving. The exiting directions don't match. $50 per dog fee if not careful. 1 key not 2, 2 fans not 3. No access to cable TV for catching up on the news. No hot tub. no grill. $50 cleaning fee in addition to $200 damage fee. I have 4 small Pomeranian's that are trained to go outside. But I always use wee wee pads as insurance. After calling upon arrival that there weren't any directions on the lock box only 1 key inside not 2 the directions when leaving was return 2 keys to the box. Turn lights off and leave 3 fans on 1 light bulb out and 1 fan not working. There was a cable control but no cable hook up to the tv & wall. People next to us were grilling. We had no grill. I had called her with each discrepancy because I didn't want to be charged for missing items. After while my phone calls went to voice mail. In the exiting directions were call when leaving. I did. I didn't see my $200 deposit for damage refund. so I texted her. Wow! she stated I was only getting back $100 because she has to send out a comforter because my dogs through up all over it and it was $50 to get it clean. What the heck. I would hope it was cleaned after every guest. Both my husband & I are & were very careful not to leave anything behind good or bad, we checked all the rooms and took out the garbage. She also claimed they pooped all over the floor. No Way. She sent photos of both. It could have been anybody's photos. I don't believe her for 1 minute. She acted like she got me when I mentioned I had 4 Pomeranians. She said I should have been charged $50 for each. I clearly stated I was traveling with 4. They wasn't anywhere click & charge yourself $50 a dog. Anyway dot your eyes and cross your T's or you'll lose deposit money.

Date of stay: July 2018
Would you recommend this hotel to a friend?   No.
Was this review helpful? Yes
This review is the subjective opinion of a TripAdvisor member and not of TripAdvisor LLC
Very interesting review......1. The renter did not even stay in this cabin she has left the review for...... She booked through HomeAway for Cabin #3, which clearly states there is no Hot Tub with this cabin. She had the option when booking to book a cabin with a Hot Tub, she choose the less expensive cabin and only mentioned something about a hot tub when she saw the other cabins. I'm sure she was not even aware of a hot tub until she arrived. 2. Instructions for check in were emailed to her, she choose not read those instructions. 3. As detailed on the listing and in the confirmation that she did not read, we do not have cable. We provide Smart TV with Netflix and Roku available. Again clearly stated when she booked and before her arrival. 4. The fan had shorted out and needs to be replaced, didn't know until her arrival and in the process of fixing now. 5. Never once did she state she was traveling with 4 dogs!!! and I don't understand how anyone thinks they would not pay a pet fee, especially for 4 dogs. She stated "We're coming from NJ with our Pomeranian fur Babies" not once mentioning that there were 4 of them or that she would be putting pee pads on my hardwood floors, again disgusting just thinking of pee pads in my cabin. 5. She was charged a pet fee of $50, which is usually $50 per dog, clearly stated in the listing as well. She was also charge an extra $50 for the dogs pooping in the cabin, and the throw up all over the comforter. Yes, we clean before each one, put this had puke all over it and was sent for professional cleaning. I do have pictures, and can also prove they are her pictures. She was the only cabin that checked out that day and the only one that needed to be cleaned, everything else was booked. So again, she choose to leave her review for the wrong cabin and not even on the site she booked with. We do believe next time this renter should dot her i's and cross her T's before choosing a place to stay and maybe also remember to read check in instructions before your arrival. We love being able to rent to people traveling with pets, unfortunately you always have that one person in the bunch that can ruin it for everyone.
This response is the subjective opinion of the management representative and not of TripAdvisor LLC
Problem with this review? Thank you. We appreciate your input.

Travellers are raving about these Elkins hotels

WE'RE OPEN ! ESCAPE from EVERYONE ! PLAY in the river. LOUNGE in the hot tub.

WE'RE OPEN ! ESCAPE from EVERYONE ! PLAY in the river. LOUNGE in the hot tub.

Looking for a place to stay in Elkins?
View all 21 vacation rentals