Booking.com
PricelineUS$61
Hotels.comUS$50
View all 12 deals
Prices are the average nightly price provided by our partners and may not include all taxes and fees. Taxes and fees that are shown are estimates only. Please see our partners for more details.
marcellak2021
2

Review of Quinta do Porto
Reviewed June 8, 2021 via mobile

Hotel delicia, equipe super solícita, organizado, charmoso e aconchegante!
Great Hotel with a magical Sunset and a Marina. Perfect view, great staff and the food was delicious . The room was great with garden / pool view and very cozy! i would love to go back’

Room tip: They have. A Marina and if you want you can ask them to get you by the small boat!
Trip type: Travelled as a couple
See all 1,043 reviews
Nearby Hotels 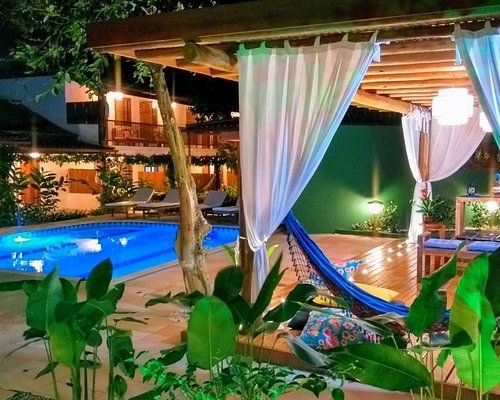 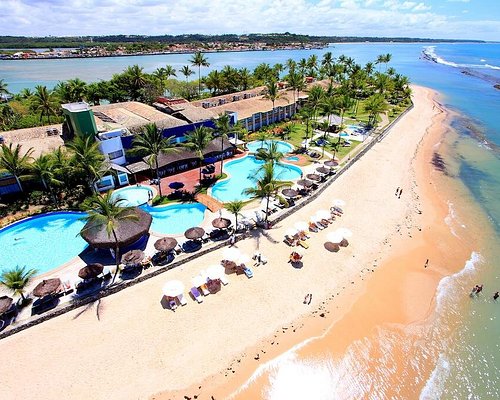 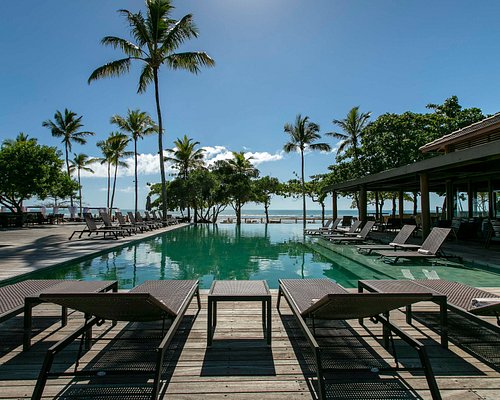 Taking safety measures
We compared the lowest prices from 10 websites
Breakfast included
Sponsored
Pousada Vila do Beco
US$78
US$68
Tripadvisor
View deal
Pay up to 12X
Travelocity
Booking.com
Priceline
US$78
View all 14 deals from US$68
254 reviews

The bestest hotel at Arraial, huge and comfortble areas, beautiful landscape and good pools, awasome to take a pictures! Beautiful sunset, closer to the brigde, near to the airport, calm and the place has a transport to the Porto Seguro!!!

This review is the subjective opinion of a TripAdvisor member and not of TripAdvisor LLC
natashat366
London, United Kingdom
22
Reviewed May 21, 2019 via mobile
Stunning, charming and very friendly hotel

The hotel overlooks the river and has its own pier and marina. When sitting in the bar and restaurant one enjoys the stunning views surrounded by a beautiful garden with tropical plants and charming decoration and locally made artefacts made from natural materials. There are 4 swimming pools that glow in the night and a heliport. The rooms are charming, very clean and overlook the garden, swimming pools, marina and river. Service is excellent and very friendly. I fully recommend this hotel as much for business as for a family trip. It’s location is perfect for access to Arraial d’ajuda and Porto Seguro whilst being situated away from the centre allowing for a peaceful and relaxing time.

This review is the subjective opinion of a TripAdvisor member and not of TripAdvisor LLC
sohonoho
Los Angeles, California
7261
Reviewed February 20, 2019 via mobile
Horrible

When we arrived we were given probably their worst room they have. It had no view at all and it hadnt been cleaned in weeks, some places in months. There were nasty stains on the bed cover and holes in the bathroom towels. The shower was extremely dirty and the windows to the shower was made in such way that its impossible to stop people from the outside peeking in. The wall plugs by the bed were not working and the bedside table was glued shut. We immediately asked for a new room and they showed us two rooms. The first one also had stains on the bed cover and the bedsude table was also glued shut. The second room was not perfect by any means but we had to take it as we were so tired. Same problem with this one with that the wall plugs didnt work and we told them twice about this on two different days but they failed to fix it during our 7 night stay. This time the bedside table wasnt glued shut...because it was missing from the room! There was also a heavy leak from the shower as the door didnt close properly. The fridge was also one of the worst one I have used since my coke froze to ice! On top of all this, the hotel has some crazy rules that you have to pay 80 reales (20-25 USD) if you leave stains in the room. Lets for one second assume that its ok to have this rule, why did they then give us a filthy room full of stains?!?! They were obviously trying to set us up and make us pay for something we didnt do. Also, when we had 2 nights left a water leak from the bathroom cealing started and we had to keep requesting towels to clean up the mess. Apart from the room here are some other goodies:
- Their is no wifi in the rooms, and it says the wifi is available throughout their whole establishement, but thats not the case.
- If you want to use the wifi you need to sit in the reception that has no AC and no fans! Good thing is that you will lose a few pounds.
- They charge you 3 reales per beach towel, per day. Something thats not mentioned anywhere when you book.
- The water in the pools are not very clean, especially not the two closest to the river. They also dont circulate the water at all.
- On the other side they do make sure to add some extra water in the juices for the breakfast, just to save a few reales.
- Lastly, they only tell you during check out that you need to pay a turistic tax for your stay. Also no mentioning of this before you book.
- Their staff doesnt speak a word of English and they barely speak Spanish. So if you dont speak Portuguese this is not the hotel for you.

Report response as inappropriateThank you. We appreciate your input.
This response is the subjective opinion of the management representative and not of TripAdvisor LLC
carolrazuk2018
Winter Garden, Florida
3
Reviewed January 10, 2019 via mobile
Great place

My husband and I stayed at this hotel for
3 nights and we had an amazing time. Friendly staff, good service, breakfast was delicious. I recommend. The location is good close to ferry boat. The owner is amazing and the pool has a nice view from Porto Seguro city!!

This review is the subjective opinion of a TripAdvisor member and not of TripAdvisor LLC
GeorgeD2249
11
Reviewed February 3, 2018
Nice Pools & Friendly Staff

The hotel have a very nice location, with a wonderful view to Porto Seguro city. The staff is very friendly and the new management is commit to improve the infrastructure and services. I will be back soon with friends.

We appreciate your contact and are pleased to have enjoyed our hotel. Our location was thought of in the comfort of our guests on arrival and departure. We are in a constant search for improvement to better serve you. We look forward to your return and we hope to see you soon.