US$154
US$126
View deal
SAVE US$28
Expedia.comUS$131
CheapTicketsUS$131
Prestigia.comUS$154
View all 17 deals
Prices are the average nightly price provided by our partners and may not include all taxes and fees. Taxes and fees that are shown are estimates only. Please see our partners for more details.
W8146MImartinm
Quebec City, Canada
207

Great hotel with excellent service. Our Rasa wing room has good views of the beautiful gardens and ocean. The complementary afternoon tea and evening cocktails are really enjoyable. On a family holiday it is handy to have access to the Garden wing and Golden Sands Hotels which are either side of the Rasa. Hope we get the opportunity to visit again. Keep up the good work. More

Thank you for your comments. We are happy to hear about your enjoyable stay and looking forward to welcoming you back for another wonderful stay.

Report response as inappropriateThank you. We appreciate your input.
This response is the subjective opinion of the management representative and not of TripAdvisor LLC
See all 4,436 reviews
Nearby Hotels 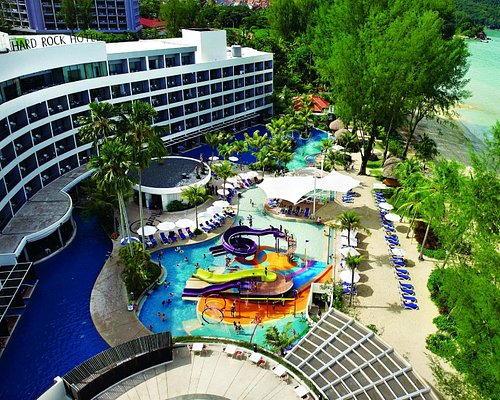 Trip.com
View deal
Free cancellation
Prestigia.com
US$134
FindHotel
US$76
ZenHotels.com
US$124
View all 17 deals from US$76
7,761 reviews
1.9 km from Shangri-La Rasa Sayang, Penang

What a brilliant holiday,just returned from 11 night's at this excellent venue,really impressed by the staff who where really on to it,well trained and extremely courteous especially attentive the lads working the Pinang pool side bar and the housekeeping lads,brilliant quiet private end of the beach,lovely,food memories made,thankyou all.
,

We are happy to hear that you had a wonderful stay at Rasa Sayang. We are glad to have the privilege to have you with us during your holiday in Penang. Do come back again soon for another excellent Shangri-La experience on your next holiday in Penang!

Report response as inappropriateThank you. We appreciate your input.
This response is the subjective opinion of the management representative and not of TripAdvisor LLC
janes065
Melbourne, Australia
2231
Reviewed August 31, 2017
Great staff

We have stayed many times the service is fantastic. The Rasa wing pool is great the staff there are very attentive and genuinely warm people with a smile. Meliz and Chan in the club lounge are professionals with a smile.

Review collected in partnership with shangri-la.com
This business uses tools provided by Tripadvisor (or one of its official Review Collection Partners) to encourage and collect guest reviews, including this one.
Ask janes065 about Shangri-La Rasa Sayang, Penang
2  Thank janes065

We are happy to hear about your wonderful stay. It has been our privilege to have you with us. We hope to see you again on your next holiday at Rasa Sayang!

Report response as inappropriateThank you. We appreciate your input.
This response is the subjective opinion of the management representative and not of TripAdvisor LLC
Sureshwaren
1
Reviewed August 31, 2017
Excellent

The staff's are so humble and helpful. The environment of the hotel is awesome. Hotel is clean and worth every single penny you spend for it. The food is super duper nice. The garden facing room has best view ever. I truly enjoyed my 3days stay here. The front desk staff's are very helpful and humble.

Review collected in partnership with shangri-la.com
This business uses tools provided by Tripadvisor (or one of its official Review Collection Partners) to encourage and collect guest reviews, including this one.
Ask Sureshwaren about Shangri-La Rasa Sayang, Penang
Thank Sureshwaren

Thank you for sharing your excellent experience at our resort. We hope to welcome you back to Rasa Sayang for another delightful stay soon.

Report response as inappropriateThank you. We appreciate your input.
This response is the subjective opinion of the management representative and not of TripAdvisor LLC
Muneeba A
manchester
2950
Reviewed August 29, 2017 via mobile
Dirty and slow to react

My husband and I booked into the hotel for our as part of our 20th anniversary visit to malaysia. We booked in for 3 nights.
+ the gardens and alot of the staff( especially Indian, malasian and Bangladesh staff) are lovely. Gardens are spectacular, and the rasa wing pool is great area to relax in. The foot and shoulder massage at the rasa pool were amazing.
Canapé and cocktail hour was perfect! Fab break in the day. The hotel also offers complimentry high tea- but we didn't try this.
The breakfast buffet was vast and the world food buffet on monday had a nice variety on offer. The queue in the mornings for a breakfast table ws rediculous so we headed to the rasa wing restaurant as this option was included in the price of the room.
The pizza at the shack- next to the pool was so and so, but the waiters were brilliant and entertaining!
I had a golf lesson - the instructor was excellent. It got a little bit hot - but the instructor was perceive and provided me with bottled water- checked if I was ok. Plus he was really entertaining! At 100 Mr per hour I would say it was def reasonable and and enjoyable bit of fun.
- when we arrived we were given a room with a partial view of the sea( the size of my handspan! )- mostly just a wall- despite having paid for a sea view and having emailed beforehand to confirm our booking. When we offered to pay for an upgrade we were given a suit at an additional cost. This bought the cost of each night up to 200 pounds. The room size was better but the windows were just disgustingly moudly!
Tbh the hotel in some places is just dirty. Our suit room windows were mouldy, the balcony hadn't been swept or cleaned in some time, I was told by 3 different staff members that they would clean it- though even I could see that specialist equipment was needed and the logical thing to do would be to just change the room.
Elsewhere: the steam room in the leisure centre was disgustingly slimy - the light on the floor in the corner was horrifying and revealed a host of nightmares, which had me running for a shower and out of there in seconds ( as it was only 11am you would expect it would have been clean)- the jacuzzi isn't fully working and tepid at best- plus they charge you for using it!!!
I asked to speak to manager about the cleanliness of our room - but spoke to 3 different manager on 3 separate occasions. We were only offered a different room on our last night and after I finally lost all patience with the assistant managers. Who unwittingly mentioned that the room had only then become available!!!
The manager Nick finally made an appearance 15 minutes before we left! Despite me having asked on numerous occasions to speak to a manager during the 3 days of our stay- I honestly believe that hotels should be given a chance to make changes and improvement when they fall short- but at this place no-one listens till you finally loose your temper!!! So stressful!. When I finally spoke to the manager Nick- as we were leaving, I was told he hadn't come before because he had been in singapore but the acting manager (Elaine) didn't bother addressing me directly even though I asked for her on more than one occasion and I was into ally told that the manager had offered us the room upgrade. Why offer a room which is unclean and then charge guests for it?!! Not a great way to look after your guests! For 200 pounds a night apparently you can't even get a clean room! Disappointing!
Nick offered us a complimentary limo transfer back to the airport, the assistant manager offered us a bottle of alcohol free wine and chocolates as an apology. A little too late though!
My husband was sick on the way to the airport and had an upset stomache for the next few days of our holiday. He payed for the driver to get the car cleaned from the outside!!! Where he had been sick! Since we don't drink and only ate at the hotel we can only deduce it must have been something he ate there!
The mosquitos are a nightmare in the evening and make sitting outside during sunset a little unpleasant.
If you visit this resort with the intention of being close to the beach- think again, apparently there are jelly fish infested waters and we were warned by staff to not get too close. That was a little disappointing.
my husband bought some macaroons from the desert deli- tasted like chicken and stale!!!
plus the 'extensive dvd library' consists of probably s maximum of 10-12 dvds like robocop!

Thank you for sharing your feedback with us. We are sorry to hear about some unpleasant experience you had encountered at our resort. We have highlighted your comments to our management which will be looked into seriously to improve our quality of services. We hope we could welcome you back in the near future for a true Shangri-La experience.

Report response as inappropriateThank you. We appreciate your input.
This response is the subjective opinion of the management representative and not of TripAdvisor LLC
Ammar A
12
Reviewed August 29, 2017 via mobile
Poor place

Currently staying
This hotel operate as 5 star, the service is 3 star
They have small swimming pool , no beach as it is public beach
Rooms and bathrooms dirty and this has been long term i.e. Poor cleaning policy
Operate 2 tier system , have a different section of the hotel with better service and ask customers to pay more despite the fact that it is not cheap.
Discussing issues with the hotel staff and manager is point less as they will care less and will do anything to change
I would not recommend it
It is rather unfortunate that Shangri La has allowed its name to be used on this premises

Thank you for your feedback. We appreciate your comments and have highlighted them to our management for improvement on our services and facilities. We hope to have the opportunity to welcome you back for a true Shangri-La experience.

Report response as inappropriateThank you. We appreciate your input.
This response is the subjective opinion of the management representative and not of TripAdvisor LLC
View more reviews
PreviousNext
1…156157158…