Hotel Spa Villa Pasiega
Lowest prices for your stay
Lock in the lowest price from these sites
US$94
Free cancellation until 21-05-20
Reserve now, pay at stay
View deal
Hotels.comUS$94
Expedia.comUS$94
PricelineUS$94
FindHotelUS$94
eDreamsUS$94
TravelocityUS$94
View all 13 deals
Prices are the average nightly price provided by our partners and may not include all taxes and fees. Taxes and fees that are shown are estimates only. Please see our partners for more details.
Richard H
Market Harborough, United Kingdom
5930

After a late afternoon arrival on the ferry to Santander the Hotel Villa Pasiega is very easy to reach and has everything - well almost - that a traveller needs for the first night in a foreign country. The receptionist was efficient and English speaking and the glory of our stay was the biggest bedroom and bathroom we've ever stayed in. All very recently fitted up with a huge, comfortable double bed, roller shutters, marble floors and a very efficient shower which spouted water in unexpected places. Space to put two people's washing stuff out, lots of towels. So far so good. Where the hotel let itself down was in the eating department, but this is a hotel review not a restaurant review and there are other places in this village on a dusty main commercial route . Breakfast however was plentiful and varied and the bill modest overall. Beware - just next door there is a hotel called the Hotel Pasiega; we didn't go into the other hotel but we think it is the same chain but a bit different in style; it had a more popular bar.More

Show less
Trip type: Travelled as a couple
See all 606 reviews
Nearby Hotels 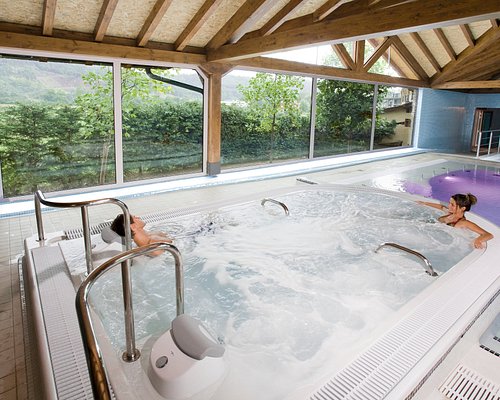 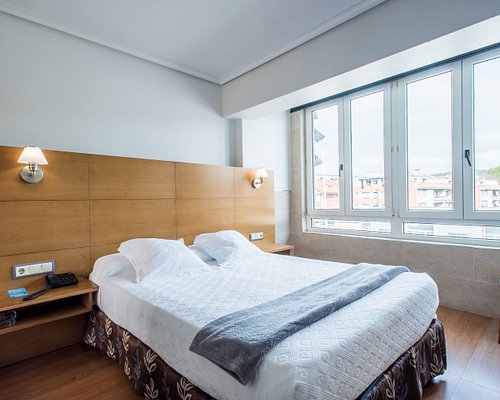 Expedia.com
View deal
Booking.com
US$69
FindHotel
Priceline
US$69
View all 12 deals from US$69
123 reviews
6.2 km from Hotel Spa Villa Pasiega
We compared the lowest prices from 12 websites
Sponsored
Apartments Spa Villa Pasiega
US$116

On the positive side, the hotel has the best spa I have come across anywhere, and that includes Cunard’s Queen Mary. Also, the room sizes are very good and the housekeeping maintains them well.
However, we continually smelt stale cigarette smoke, both in the corridors and in our room. Most unpleasant.
Breakfast was ok, but very hectic, as there was constant competition with large groups staying there, who were given preference in many areas
The reception staff were friendly, but many of the other staff need hospitality training. Surly outlook and minimal interaction.
The bar was ok, but only on our second night were we told there was also a restaurant, and we weren’t offered the English language menu until our third night.
Overall, very mixed feelings

This review is the subjective opinion of a TripAdvisor member and not of TripAdvisor LLC
Jim M
81
Reviewed September 2, 2017
Hotel Villa Pasiega one of the Best

Great spacious rooms , great friendly staff . Love the help yourself buffet , chef at hand to cook whatever you want no problem . Wines included help yourself .
Missed out on the indoor pool , next time I will !

This review is the subjective opinion of a TripAdvisor member and not of TripAdvisor LLC
BillDLosAngeles
LOS ANGELES
66
Reviewed August 23, 2016
Great hotel on the road to Bilboa, Spain

At first we were we were expecting a road side hotel but found a real gem. The hotel staff was the very best, friendly, helpful and courteous. The restaurant was a real surprise, a cafeteria with a chef that will custom make dished for you at a very reasonable price. Separately there is a full bar. We stayed in a one bedroom apartment that was in a building next to the main hotel, very modern, all conveniences. Free parking. Highly recommend !!

This review is the subjective opinion of a TripAdvisor member and not of TripAdvisor LLC
Nina M
Ross on Wye
2927
Reviewed July 25, 2016
Very good position near to Santander

Arrived late afternoon in Santander, this hotel is very convenient for an overnight stay. It's clean comfortable and reasonably quiet. The meals are buffet style and are ok but only ok. Staff are pleasant and helpful.

This review is the subjective opinion of a TripAdvisor member and not of TripAdvisor LLC
MarkM9760
Ross-on-Wye, United Kingdom
1220
Reviewed June 30, 2016
Fantastic hosts for our rallying event

We booked and stayed in one of their apartments when we attended the Rallye Festival Trasmiera. The apartment was fantastic with a double bedroom, a smaller bedroom with a single bed that converted into a double, a small living room with a sofa that doubled as another bed and a small kitchenette with a fridge, sink, cooker, washing machine and microwave! The bathroom was large with a jacuzzi bath and shower. All of the rooms in the apartment had access to a private balcony. The only problem was that the balcony overlooked the roof of one of their function rooms! This was only a minor gripe though because beyond the roof was a beautiful view of the Pyrenees.
The hotel staff couldn't have been more helpful and, despite the hotel being packed for the rally, they still found the time to help us out with a small emergency at home by arranging for a key to be sent back to the UK on our behalf.
The restaurant was fantastic value. They do a buffet selection for breakfast and lunch but, included in the price of the buffet, they also cook food to order from the menu. Don't expect gourmet food but, for the cheap price it was more than adequate for us. The cost of dinner also included wine and soft drinks from the fridge and a fantastic ice cream cart just outside the restaurant door. Breakfast was really great and included unlimited freshly squeezed orange juice! yum!! Again, as well as the continental selection on offer, they cooked bacon and eggs to order when asked. I really, honestly, don't understand why some people have complained on here? What were they expecting for less than £10 a head?! I was over the moon with what we were served including freshly cooked Turbot, Veal and Bolognese.
We found a separate spa connected to our apartment building and, despite using it every day, we were the only ones ever in there with most people visiting the spa in the main building.
All in all, we had a wonderful time and will be staying here again next year for sure!!

Room tip: Pay the small extra charge and get an apartment, you get far more for your money.
Ask MarkM9760 about Hotel Spa Villa Pasiega
Thank MarkM9760