Hotel Lido
Lowest prices for your stay
Lock in the lowest price from these sites
US$148
View deal
PricelineUS$148
eDreamsUS$148
Agoda.comUS$148
TripadvisorUS$148
Expedia.com
Hotels.com
View all 12 deals
Prices are the average nightly price provided by our partners and may not include all taxes and fees. Taxes and fees that are shown are estimates only. Please see our partners for more details.
christinem70429
Leeds, United Kingdom
23

After reading the previous review I was a bit apprehensive about having booked this hotel. my friend & I also booked 2 single rooms & we each had a balcony with a fantastic view of the lake. We had beautiful weather which meant the lakeside got busy at times but was always quiet by the hotel. we found the staff pleasant & helpful I wish I could speak Italian as because Lake Ledro is not as touristy as Garda not everyone speaks much English.
Regarding food the breakfast buffet was very good - & we found the evening meals quite good as well. We found the cost of the wines more or less the same as other hotels & although we chose the cheaper ones the quality was excellent. Loved the little town of Pieve totally unspoilt. Also great to have the free travel card which we used to go down to Riva twice on the very good local buses. We didn't do all the walks we wanted to do as it was too hot for us but would love to go back again another time of yearMore

Show less
Room tip: Worth paying for view of the lake
See all 198 reviews
Nearby Hotels 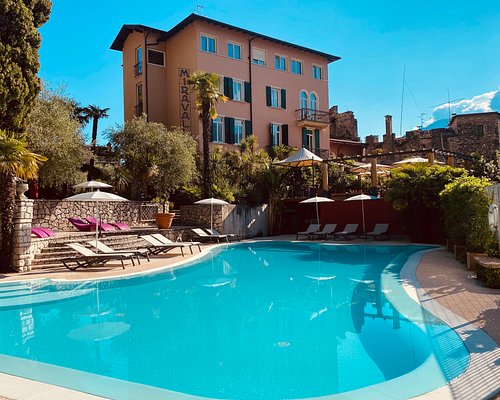 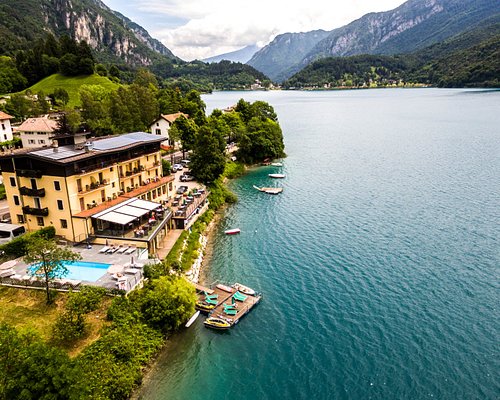 We booked two single rooms at the Hotel Lido with Inghams. We chose this hotel as the single rooms had lake views. A big mistake as you will see. We arrived late after 9pm on a Wednesday night. They had kept a dinner for us but would nor serve us a carafe of local wine. We were offered a wine list with average price of a bottle 20 euros. This is very expensive compared to other Italian hotels I have recently stayed in.
We were booked on a trip one day and were being picked up at 7.50am. We requested breakfast at 7.15am (breakfast started at 7.30). Marcus the manager / owners response was IMPOSSIBLE. They did let us in for breakfast reluctantly but there was no need for rudeness. On the third day there was no breakfast cereal (they only supplied corn flakes!) The waitress said they had none. Next day the same. We complained at the desk and rang Inghams. Cornflakes were there the next day but no apology. Breakfast was generally very average no fresh fruit just tinned peaches or pineapple and very limited and unattractive hot food. (Just scrambled egg and baked beans.)
Dinner choice had the be made the day before. A very limited menu compared to other Italian hotels I have stayed in. In some cases it was inedible. For example, deep fried bread sandwich with a thin slice of mozarella inside which you could hardly see. As slice of flash grilled cheese. These were main courses! No choice of pudding usually a piece of cake.
We lunched at the other two main hotels, The Garden and Mezzolago. (Both in the Inghams brochure). The difference was amazing. Both were attractive and modern, the Lido inside is very tired. We were shown round by the friendly owners, shown the menus. All there hotels are about the same price and far better.
When we left the Lido nobody spoke to us, nobody wished us a good journey there was never an apology. We were "personna non gratis" for complaining to Inghams.
We have complained to Inghams and Hays Travel about our treatment at this hotel and made our comments known to the rep while we were there. Their response has been everybody else but one who responded to their questionnaire in May said the hotel was good. Tripadviser reponses since July2018 do not bear that out. Only two other English guests were there with us. They were equally disappointed.
DO NOT BOOK THIS HOTEL if you are visiting Ledro with Inghams book the Hotel Garden or the Mezzolago. I wish we had.
I am not sure about traveling with Inghams in the future as the Lido quality is so poor it should not be offered in their brochure.

This review is the subjective opinion of a TripAdvisor member and not of TripAdvisor LLC
Pheli H
31
Reviewed June 12, 2019 via mobile
no help in emergency situation

We didnt stay in this hotel but after someone broke in our car window and stole all our belongings (including bank and viscards) we urgently needed to block them and message our family at home.
Do to so we we're looking for Wifi and ended up here but unfortunetley the staff is really rude. We litterally had to beg for the wifi password and after 10 min they kicked us out. The elderly lady is a very unfriendly person.
Thank you for nothing.

This review is the subjective opinion of a TripAdvisor member and not of TripAdvisor LLC
Sandra P
Bexhill-on-Sea, United Kingdom
2515
Reviewed October 14, 2018
Wonderful holiday

A beautiful,quiet location,by the lake. We had a room at the front of the hotel which wasn’t very big but serviceable and did have a nice side view of the lake.
The staff were excellent,polite and friendly. We enjoyed the beautiful scenery,the lake and the nearby village. We are hopefully going back next year.

Room tip: We had room 206,which wasn’t very big, but we had a nice balcony and a side view of the lake.It was also very quiet.
Trip type: Travelled as a couple
Ask Sandra P about Hotel Lido
Thank Sandra P

This review is the subjective opinion of a TripAdvisor member and not of TripAdvisor LLC
JAWS70
Whitehaven
33
Reviewed September 25, 2018
Not what it seems

We spent a week at the Hotel Lido Ledro in September 2018. It’s a fairly traditional Italian style, family run hotel, situated right on the edge of the north-western end of the lake with restaurants, cafes and a supermarket in the immediate area. The small village of Pieve di Ledro is just a short walk away, however, there’s not much there other than a museum, a church and some hotels. The bus service runs from the village (except on market day) but it’s a spasmodic and awkwardly timed service.

Although we found the staff very friendly and most willing, we can’t say we enjoyed our stay and found it below the standard we’ve come to expect from Inghams. Our room was very basic and small. Two, very hard, narrow beds placed together with only about a foot space on the outsides (turning during the night was most hazardous!). The flooring was bare wooden boards – no rugs nor carpet and no curtains other than flimsy nets at the windows, so we found the room echoey and ‘bangy’. The bathroom again had bare wooden floor-boarding with a toilet, bidet and a very small, flimsy shower. Our accommodation though was thoroughly cleaned each morning. Although there were two small chairs, our room wasn’t somewhere to relax in and we found it awkward, poorly lit and uncomfortable.

Our main dislike was the food. Having said that, the breakfast was excellent – lots of self-service nuts, dried fruit, cereals, cakes, croissants and breads with a great self-service coffee machine. To Inghams credit, we were provided with a packed lunch if required. However this always consisted of two dry buns, with just a thin slice of cheese and likewise ham (or salami) in the other, a small triangle of very sticky cake (difficult to unwrap from the foil wrapping) and an apple. The apples though were appalling – small, very marked, holed and for a country actually renowned for growing them – shameful!

We didn’t enjoy the evening meals at all – in fact we tended to fill up from the excellent salad bar and the bread rolls provided. Many of the courses during the week were left untouched and of those tackled, half or more was invariable pushed to one side. I found it insulting for a hotel restaurant to serve soup which basically consisted of vegetables or sliced omelette in what was effectively hot water. The baked potatoes served were anaemic and greasy and the mash was so liquid, it could easily have run off the plate. On one occasion, the meat was served with ‘baked’ AND mashed potato and no veg! We found the food generally was very oily and greasy and what really irked us was that any other guests we met travelling with Inghams all said their food was terrific in their hotels!

We booked three excursions. The first one to the Dolomites was very good and well worth the money. Our second one to Mantova and Sigurta was disappointingly cancelled at the last minute due to lack of support. The last one, to Bolzano and Renon, principally to see the ‘Otzi’ 5,300 year old ‘Ice Man’ was somewhat disappointing in so far as we were only allowed less than half an hour inside the museum. Afterwards, we were taken up in a cable car high above Bolzano, then transported several miles by narrow-gauge railway to rejoin the coach and driven to a restaurant for lunch. We felt rather peeved though that after travelling for some 2.1/2 hours, we were then so restricted in time for the museum – many were of the opinion that the second half of the tour was rather superfluous and at the expense of the main attraction.

The walks around Lake Ledro are limited. There is a pathway right round the lake but as the surrounding mountains are so wooded, that’s about it locally. To get anywhere, Ledro is so isolated, it really means going down to Riva del Garda – some 20 – 25 minutes away. To Inghams credit, they did provide taxis for our excursions from Riva and back and they also provided one to convey us to Verona airport.

All in all though, not a very enjoyable holiday which we have had to mark down because of the poor food and below standard room.

This review is the subjective opinion of a TripAdvisor member and not of TripAdvisor LLC
JoanneL1370
26
Reviewed September 15, 2018 via mobile
Horrific Hotel

We stayed for 7 nights at this hotel we were greeted with a miserable and very unhelpful lady owner. We then got to our twin mountain view room and was shocked as the room was tiny. The balcony faced a fairground ferris wheel which played very loud music at night as well as the road noise. The food apart from the breakfast which was the best meal of the day was disgusting and taste less . The location is the only good thing about this hotel avoid this hotel.

This review is the subjective opinion of a TripAdvisor member and not of TripAdvisor LLC
View more reviews
PreviousNext
12…
<script type='text/javascript' crossorigin='anonymous' async onerror='__scriptLoadError(this,true);' src='https://stat